Increasing tanker aircraft demand with rising defense budget across developed and emerging economies will boost the market revenue. Growing frequency of sorties away from ground bases has made refueling an essential mission component. The AAR supports overseas deployment in a short notice. Rising adoption of effective methods for increasing endurance and range of aircrafts will propel the aerial refueling systems market growth. 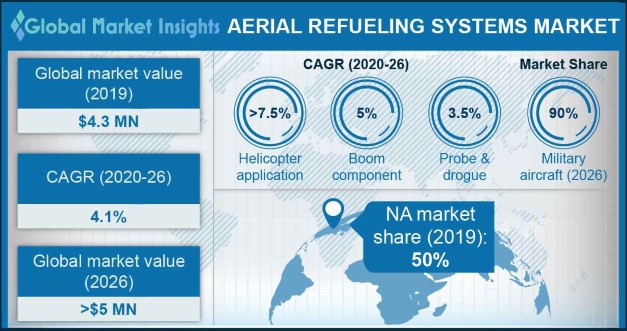 The aerial refueling tankers are undergoing transformation to enhance airspeed, altitude, and range. The industry players are working to increase suitability for severe environments, lower lifecycle costs, autonomous operation, and roll on & roll off capability.

In 2019, military aircraft held around 90% share in the market owing to utilization of air to air refueling systems to enhance the range of defense missions and allowing them to fly farther than that they would have normally managed. The in-flight refueling plays crucial role in strategic missions and aerial conflicts. Various countries are growing their tanker fleet to strengthen their air force.

Refueling pods leads the aerial refueling systems market on account of its utilization for carrying the fuel. The industry players are increasing the fuel carrying capacity of the pods to refuel more than one aircraft. In August 2016, Cobham developed Wing Aerial Refueling Pod (WARP) with stronger vertices and higher operating speed. The system is capable of transferring around 400 gallons fuel per minute to refuel more than one aircrafts.

Boom component segment in the market will witness around 5% growth through 2026 led by its employment for transferring the fuel from the carrier to the supplier. Refueling probes and hose play an important role in AAR system. The complete process brings the aircrafts in proximity that may lead to an accident. Thus, the system is undergoing automation for better control and enhancing safety.

Probe & drogue aerial refueling systems market will register gains of around 3.5% between 2020 and 2026 due to its flexibility. The system is capable of transferring fuel up to three receivers simultaneously. The Hose Drogue Unit (HDU) is safer, easy to install and allows greater relative movement between the carrier and receiver. Further, when one of the HDU unit becomes unserviceable during course, the tanker can still unload the fuel. However, low transfer rate and its limitation for large sized military aircrafts will restrict the product penetration.

Consumer inclination towards quality to escalate revenue generation from OEM 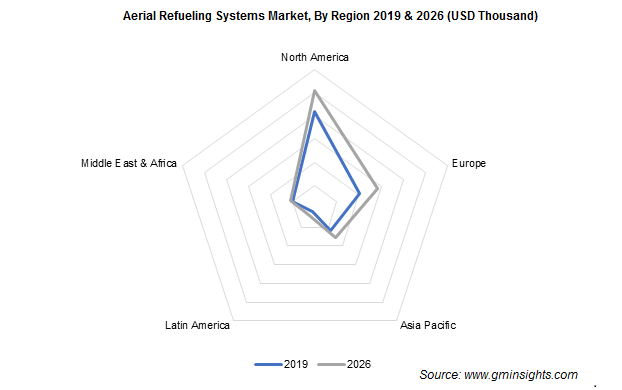 In 2019, North America accounted for over 50% market share owing to presence of largest refueling fleets. The U.S. fleet includes over 400 KC-135s and 55 large KC-10s. The U.S. Air Force and Marine Corps are enhancing their fleet to sustain their aerial supremacy that in turn will influence the market expansion across the region. Moreover, the region is witnessing replacement of old refueling tankers with versatile ones to strengthen refueling capability.

Technology advancement to emerge as a key growth strategy

The aerial refueling system manufacturers are working on overcoming the potential issues in air tanker refueling including operational benefit and potential cost. The service providers are continuously increasing the number of hoses in refueling system to ensure effective use of refueling asset and interoperability. Such initiatives will propel industry growth.

The aerial refueling systems market research report includes in-depth coverage of the industry with estimates & forecast in terms of volume in units and revenue in USD Thousand from 2016 to 2026, for the following segments:

The market size of aerial refueling systems was valued at USD 4.3 million in 2019.
The industry share of aerial refueling systems is expected to grow at over 4% CAGR from 2020 to 2026.
According to the analysts at GMI, probe & drogue systems will register gains of around 3.5% between 2020 and 2026 due to the flexibility they provide.
According to Global Market Insights, Inc., North America accounted for over 50% market share in 2019 owing to presence of the largest refueling fleets.
The key industry participants include Lockheed Martin, Boeing, Cobham Plc, Zodiac Aerospace, Eaton Corporation, GE Aviation System, Engineering Corporation, Northstar and Omega Aerial Refueling Services, lnc.