Aircraft Ignition System Market size exceeded USD 280 million in 2019 and is poised to grow at a CAGR of over 5% between 2020 and 2026. The market growth is driven by rapid adoption of aircraft ignition system by various cargo, commercial, and defense sectors.

Presence of major aircraft and component manufacturers, such as Airbus, Boeing, Bombardier, and GE Aviation, in developed countries will regularize the market dynamics. The companies extensively invest in R&D to improve operational capabilities of their aircraft ignition systems, supporting technological competitiveness within North America and Europe. 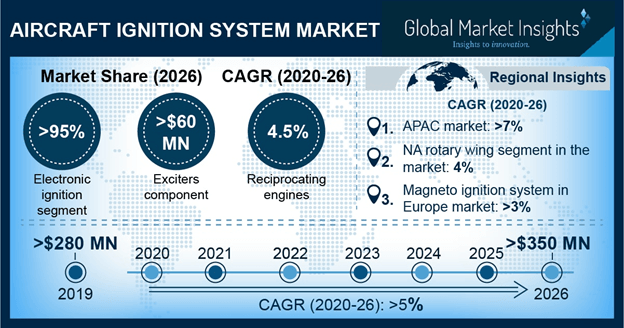 The market will experience a slight dip in 2020 due to coronavirus (COVID-19) pandemic. Global trade & travel limitation and temporary lockdown of manufacturing facilities have disrupted the market ecosystem. Only limited business is achieved through the operation of cargo and general aviation aircraft as they are used for medical purpose.

Reciprocating engines in the market will witness a growth rate of 4.5% till 2026.The sudden outbreak of COVID-19 has created medical emergency across the globe. Travel and trade restrictions have created a shortage of essentials and medical goods in many regions.

In such a situation, general aviation aircraft, which operates on reciprocating engines is catering to the rising demand for emergency and medical services. Various regulatory bodies across the globe are giving permission to small aircraft to transport essentials and medical goods, positively impacting the market size.

Rising number of general aviation aircraft in the U.S. to boost the North America market revenue

The rotary wing segment in the North America aircraft ignition system market captured a share of around 6% in 2019 and is expected to observe over 4% growth through 2026. The growth can be attributed to maximum number of commercial aircraft present in the U.S. Increasing per capita income within the region and rising business activities are increasing the demand for commercial aviation within the region. 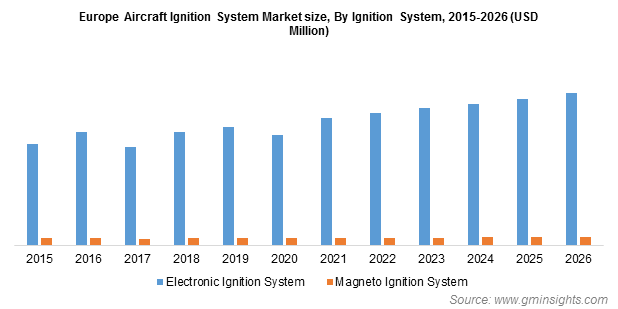 The retro fir segment valuation in the APAC market was over USD 52 million in 2019 and is predicted to expand at 7% CAGR from 2020 to 2026. The growth can be credited to increasing requirement of LLC which is leased or purchased in second hand by airline operators of Asia Pacific. These types of acquisitions demand retrofitting aircraft ignition system as per the regional government norms, influencing the market growth.

The Asia Pacific aircraft ignition system market accounted for more than 22% revenue share in 2019 and is anticipated to register around 7% gains during the forecast period. Efforts of regional government bodies toward the development of the aviation industry by increasing green filed and brown field investments along with providing subsidiaries will fuel the market growth.

Many global industry players are attracted to India due to favorable regulatory norms and are establishing their MRO hubs and component manufacturing centers in India, supporting retrofit market growth.

Receiving compliance certification of various regulatory bodies to ensure quality of the product is also one of the major points considered by their clientele. For instance, in 2019 Champion Aerospace received AS9100 Rev D certification, which stands for manufacturing, quality, and safety of systems in the aviation industry.

The aircraft ignition system market research report includes in-depth coverage of the industry with estimates & forecast in terms of revenue in USD from 2015 to 2026 for the following segments:

The Asia Pacific market accounted for more than 22% revenue share in 2019 and is anticipated to register around 7% gains during the forecast period.
Major companies operating in the market are Woodward, Meggitt, Transdigm, Unison, Electroair, G3I, Surefly, Air Power, Aero, and Sky Dynamics.
According to the analysts at GMI, the reciprocating engine segment in the market will witness a growth rate of 4.5% till 2026.
The market demand for magneto ignition systems is due to its simple & robust design which makes it more reliable over old reciprocating engines where majority of components are mechanical.