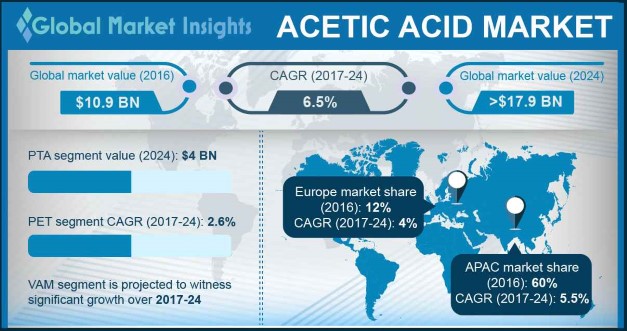 Acetic acid also known as ethanoic acid, it is a colorless liquid that acts as a major precursor for the production of various chemicals used in textile, rubber and plastic industries among others. It acts as an intermediary for the formulation of various coatings, sealants, and greases that are widely used in the construction, electronics, and the packaging industry. Acetic acid market is projected to show substantial growth during the forecast period. The growing use of acetic acid in manufacturing of various products such as vinyl acetate monomers (VAM) and purified terephthalate acid is projected to boost the market size during the assessment period. Acetic acid is widely used to produce VAM, which is in turn used to manufacture various resins and polymers for adhesives, films, paints, coatings, textiles and other end-user products.

Polyvinyl acetate (PVA) and polyvinyl alcohol (PVOH) are the major derivatives manufactured using VAM. PVA is widely employed in textiles, adhesives, packaging films, photosensitive coatings and thickeners whereas, PVOH finds its applications in paper coatings, paints and industrial coatings owing to their excellent adhesion properties. The growing infrastructural investments across the globe is anticipated to propel the demand for coatings and sealants in turn positively contributing to the growth of the acetic acid monomers demand throughout the forecast period. Moreover, the rising application of acetic acid in production of terephthalic acid is also set to aid in the market growth during the forecast period. Terephthalic acid forms a major building block in manufacturing of polyester resins which is extensively used in polyester films, PET resins and polyester fibers. Additionally, terephthalic acid also finds its application in home furnishing and in manufacturing of textiles such as bed sheets, clothes, and curtains. The PET application segment held a market share close to 20% in 2016 and is projected to exhibit a CAGR of over 2.6% throughout the review period.

The major players in the market are seen to invest in research and development activities to expand their production capacity. This on-going trend is projected to significantly contribute to the industry during the assessment period. For instance, Celanese Corporation, a major industry player announced the expansion of its acetic acid and VAM plant capacity each by 150 kilo tons in Clear Lake, Texas. Eastman Chemical Company another significant market player also announced the expansion of its carboxylic acid plant capacity at its U.S. facility in Longview, Texas.

Rising price of petroleum feedstock along with the presence of stringent regulations is likely to bring new business growth opportunities. The proficient players are constantly seen to shift towards the production of bio based acetic acid produced from sugar, corn, cheese whey waste, poplar tree, and other bakery residues. Bio based acetic acid possess same properties as convectional acid with minimal environmental damage. Moreover, with the price volatility of conventional raw materials such as methanol is projected to further boosted the shift to bio based acetic acid in the coming years.

The acetic acid market for VAM was the largest segment in 2016 and is expected to exhibit similar trend throughout the given period of 2017-2024. VAM is a primary intermediate which is used in the production of several polymers & resins for paints, coatings, adhesives, films, textiles, and other end-use products. The growing demand for these applications across the globe is anticipated to positively contribute to the growth of the segment by the end of the forecast period. Moreover, rapid industrialization & urbanization mainly in Asia Pacific and the Middle Eastern regions has led to strong rise in the construction industry which in turn will have subsequent impact on the product demand during the forecast timeframe. For instance, Asia Pacific construction industry is likely to witness gains close to 7% in the coming years. Furthermore, the rising demand for automobiles in the developing economies coupled with the growing shift of manufacturing bases shall also surge the demand for vinyl acetate monomer in the coming years.

PTA was the second largest application segment in 2016 and is projected to show the same trend throughout the assessment period. The segment is projected to reach USD 2.2 billion by the end of the forecast period. The rising demand for PTA for production of PET bottles and polyester films is anticipated to drive the growth of the segment. 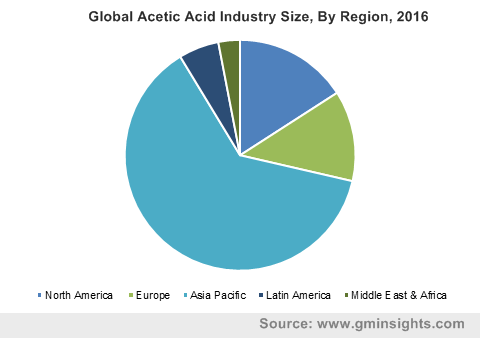 Asia Pacific has resulted in a greater demand for construction and textiles industries thereby substantially contributing to the growth of the market. The region held a market share of over 60% in 2016 and is projected to grow at a CAGR of 5.5%. Moreover, the rapidly growing pharmaceutical industry mainly in India and Japan among others is projected to generate substantial revenue during the forecast period. The product is widely used in the in manufacturing of disintegrant in the pharmaceutical industry, thereby growing demand for medicinal tablets shall aid in the growth of the overall market. According to the Department of Pharmaceuticals, the Indian domestic pharmaceutical market generate revenue over USD 16.5 billion in 2016 and is anticipated to exhibit a year on year growth of over 9.4%.

Acetic acid is produced by methanol carboxylation process. This process accounted for over 65% of the global production. Methanol and carbon monoxide are used as raw materials in the production process. Acetic acid is used to produce vinyl acetate monomer, acetic anhydride, purified terephthalic acid, acetate esters, and others. The industry is witnessing a major upswing with the growing utilization trend of this acid as a raw material to produce PTA and VAM. It finds application as an intermediate in formulation of polyester, coatings, greases, and sealants, which are widely used across end-use sectors such as textiles, packaging, automotive, electronics, and paints & coatings.