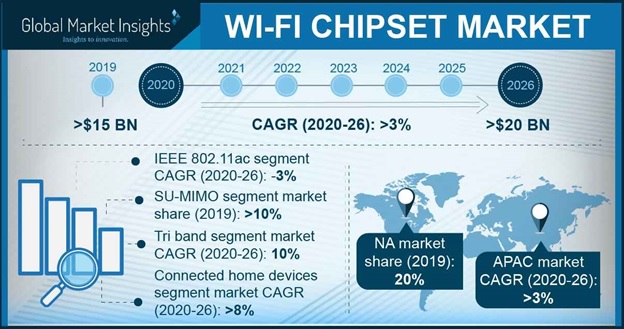 Rising penetration of IoT devices is likely to boost the market growth. A Wi-Fi chipset offers high-speed wireless connectivity, network security, and reduced latency, which will increase its integration into IoT devices across various industries. Enhanced productivity of industries connected over IoT and Wi-Fi networks will further drive the market demand.

The rising penetration of enterprise wireless network technology in government institutions and IT sector has resulted in the expansion of the Wi-Fi chipset market. The enterprise wireless network offers several benefits including centralized management, high end-user experience, network agility, and security. The increasing adoption of this technology will address the high demand for Wi-Fi chips in the government and IT sectors.

The COVID-19 pandemic has disrupted the supply chain of raw materials and components across the globe. The pandemic has also restrained the buying power of consumers and a decline in demand for consumer electronic equipment, majorly desktop PCs, tablets, and laptops.

The IEEE 802.11ax (Wi-Fi 6 & Wi-Fi 6E) segment in the Wi-Fi chipset market is poised to witness 20% growth rate till 2026owing to technological advancements in the Wi-Fi 6 and Wi-Fi 6E chipsets over IEEE 802.11ax standard. This standard allows chipset manufacturers to allow data transfer speed of up to 9.6 Gbps over the 160 MHz channel. Such advanced features increase its adoption in smartphones, tablets, laptops, and wearable devices in the market. 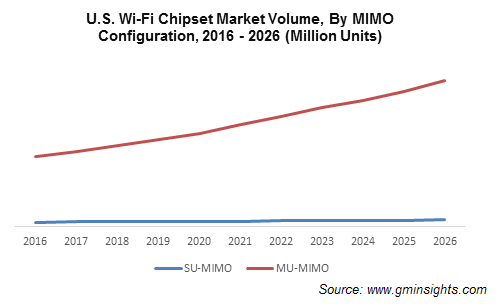 The MU-MIMO configuration dominated more than 90% of the Wi-Fi chipset market share in 2019on account of the rising penetration of triple play services and OTT platforms in developed economies. This configuration offers high bandwidth and low latency while connecting multiple devices over the Wi-Fi network.

According to the March 2020 report by Verizon Communications, in the U.S., the video streaming and online gaming traffic witnessed a significant increase by 12% and 75% respectively. The increase in web-traffic will create a high demand for MU-MIMO Wi-Fi configuration in the market. 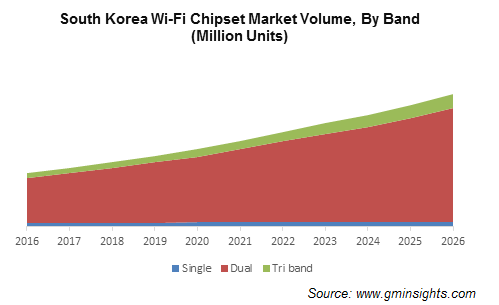 The dual band segment accounted for more than 80% revenue share in 2019 and is predicted to expand at a CAGR of 8% through 2026impelled by the high usage of dual-band Wi-Fi chipset in public Wi-Fi routers and gateway devices. The dual band Wi-Fi network supports both 2.4GHz and 5GHz operational frequencies simultaneously. It offers high flexibility, faster transmission speed, and high stability by avoiding connection issues. These factors will increase its acceptance in Wi-Fi connectivity devices for public hotspots and residential applications.

Rising government initiatives for the development of smart cities and increasing integration of Wi-Fi & IoT devices in public infrastructures are driving market size. For example, in December 2019, the Seoul Government announced to deploy a city-wide IoT network as a plan to create a network of hyper-connected cities by 2022. The government has planned to install 1,000 wireless gateway devices that will improve the public Wi-Fi infrastructure and smart city applications. Public Wi-Fi hotspots leverage the dual-band Wi-Fi network due to high signaling strength, multiple devices connectivity, and high ability to mitigate network congestions.

The laptop application held over 20% of the Wi-Fi chipset market share in 2019 and is projected to attain 3% CAGR during 2020 to 2026on account of the rising trend of Bring Your Own device (BYOD) among the enterprise sector. The growing adoption of BYOD policies and enterprise mobility among IT companies is driving the adoption Wi-Fi chipset-based laptop devices in the industry. Laptops connected by a wireless network offers lucrative features such as mobility, productivity, and convenience in handling.

Companies are extensively focusing on integrating technologically advanced Wi-Fi chipset into their upcoming laptop devices to gain a competitive advantage in the market. For instance, in September 2020, Samsung launched the ‘Galaxy Book Flex’ series, a laptop device integrated with a Wi-Fi 6 chipset. The new laptop series supports Wi-Fi, Bluetooth, and 5G technology for wireless connectivity applications.

Rising penetration of smart home devices in the U.S. 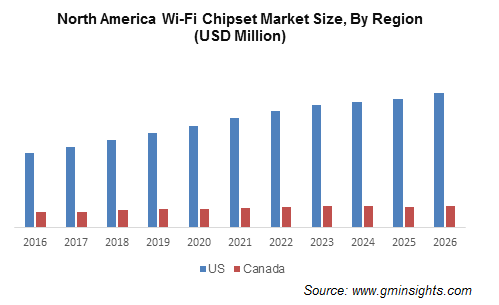 North America Wi-Fi chipset market accounted for 20% revenue share in 2019 and is anticipated to register growth of above 4% from 2020 to 2026 driven by rising penetration of smart home connected devices in the region. According to January 2020 press release by Consumer Technology Association, around 69% of the total households in the U.S. have at least one smart home technology product in their households. The proliferation of smart home devices such as smart speakers, wireless security systems, smart TVs, connected home appliances, service robots, etc., will increase the regional market growth. Favorable government initiatives supporting the adoption of low-cost and high-speed internet connectivity across the region are likely to boost the acceptance of Wi-Fi chips.

Focus on new product launches to stay competitive in the market

This market research report on Wi-Fi chipset includes in-depth coverage of the industry with estimates & forecast in terms of revenue in USD from 2016 to 2026 for the following segments:

In 2019, the Wi-Fi Chipset industry size crossed USD 15 billion, and it is anticipated to record 3% CAGR through 2026, with global shipments expected to cross 4 billion units annually by 2026.
The IEEE 802.11ax (Wi-Fi 6 & Wi-Fi 6E) segment may depict 20% growth rate through 2026 and will be crucial for market growth on account of technological advancements in the Wi-Fi 6E and Wi-Fi 6 chipsets over IEEE 802.11ax standard.
The MU-MIMO configuration segment accounted for a mammoth 90% of market share in 2019 and will stand out owing to increasing penetration of OTT platforms and triple play services across developed economies.
The dual band segment held 80% revenue share in 2019 and may exhibit 8% CAGR through 2026, driven by increasing adoption of dual-band Wi-Fi chipsets in gateway devices and public Wi-Fi routers.
Proliferating trend of BYOD in the enterprise sector will push the laptop application segment that accounted for 20% of the market share in 2019 and may register 3% CAGR through 2026.
North America held 20% of the global revenue share in 2019 and may record 4% CAGR through 2026, owing to increasing penetration of smart home connected devices in the region.