Whiskey Market size exceeded USD 60 billion in 2020 and is estimated to grow at over 5.9% CAGR between 2021 and 2027. Rise in the millennial population globally, increase in spending capacity and changing consumer taste profile for alcoholic beverages is expected to raise the demand for specialty whiskeys such as singe malt whiskey and blended whiskey over the forecast period. Moreover, rising consumer awareness regarding the health benefits of whiskey such as its ability to lower risk of heart diseases, diabetes and dementia to some extent, fight cancer, promote weight loss, act as a digestive aid, and reduce stress, if consumed in moderation should further raise product demand. 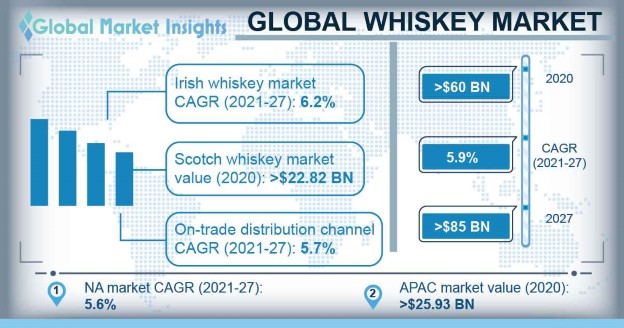 Whiskey is a type of spirit produced using different grains such as corn, wheat, barley, and rye, among others by distilling. Whiskey can be consumed directly or by using in different cocktail and shot recipes. Blended whiskey, Single Malt whiskey, Irish whiskey, Japanese whiskey, Scotch whiskey, Bourbon whiskey, Tennesse whiskey, Canadian whiskey and Rye whiskey are some of the types of whiskey available in the market.

Increasing product innovations such as organic whiskey are likely to positively influence consumer preference and boost the whiskey market demand. Growing trend of social gatherings and parties among the younger generation should further favour growth of the market.

However, the sudden closure of restaurants, bars and pubs owing to the stay-at-home orders issued by governments of different countries during the COVID-19 pandemic is likely to decline the product demand for a short to medium timeframe. Moreover, the travel restrictions imposed in different countries of the world created a shortage of casks required for storage of the whiskey, which is likely to take a toll on the market growth to some extent. Several whiskey manufacturers had diverted their operations from production of whiskey towards production of alcohol and hand sanitizers during the coronavirus pandemic, which is expected to further hamper product sales for a medium timeframe.

Superior taste profile, availability in a variety of different flavours and increasing number of distilleries opening in Scotland to boost demand for scotch whiskey and stimulate market statistics 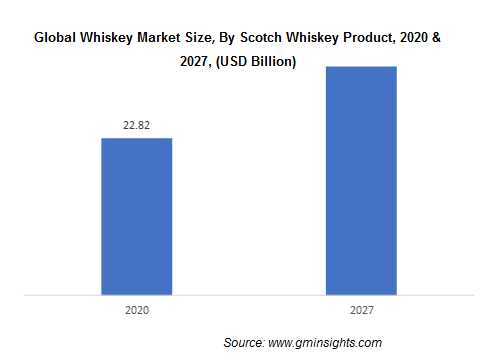 Scotch whiskey was the most widely consumed whiskey globally exceeded USD 22.82 billion in 2020. The high rate of consumption of scotch whiskey can be attributed to the superior taste profile of the product and growing consumer demand for the single malt and blended scotch flavour. Moreover, scotch whiskey is available in different flavours including caramel, spice, orange, peel, and vanilla, thus providing a number of options to consumers to choose from. Rising consumer demand from the characteristic smooth flavour and smokey taste of scotch whiskey is expected to raise product demand and foster the industry landscape.

Increasing number of distilleries opening up in Scotland in the past few years is likely to favour market growth. Statistical data released by The Wine & Spirit Trade Association (WSTA), Scotland recorded an increase in the number of distilleries from 186 in 2018 to 214 in 2020, which shows significant growth opportunities for the market over the assessment period. The global Scotch whiskey market is expected to witness considerable CAGR of over 6% between 2021 and 2027.

Availability of a wide range of products under a single roof and effective marketing strategies undertaken by hypermarkets, supermarkets, and online retail platforms to boost sales of whiskey through off-trade distribution channel 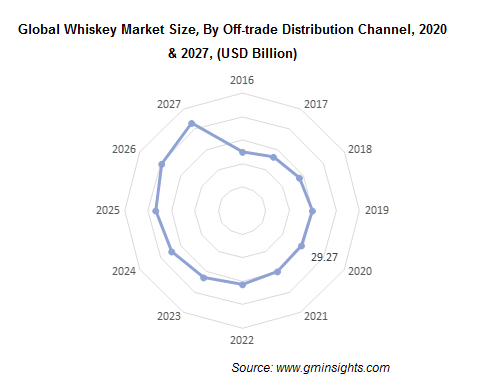 Availability of whiskey of different brands under a single roof in supermarkets and hypermarkets imparts a greater degree of choice to consumers, thus promoting the global whiskey market expansion. The customer centric approach and improved shopping experience provided by hypermarkets and supermarkets by dedicating specific sections to whiskey products should further attract consumer attention and foster the market statistics over the forecast period.

Global whiskey market through off-trade distribution channel was valued at over USD 29.27 Billion in 2020 and is expected to grow at a CAGR of 6.1% over the assessment period. The COVID-19 pandemic and the resultant lockdowns imposed in different countries across the world are encouraging in-house consumption of whiskey and increasing consumer dependence on online retail sales channels for purchase of whiskey, thus driving the industry outlook. 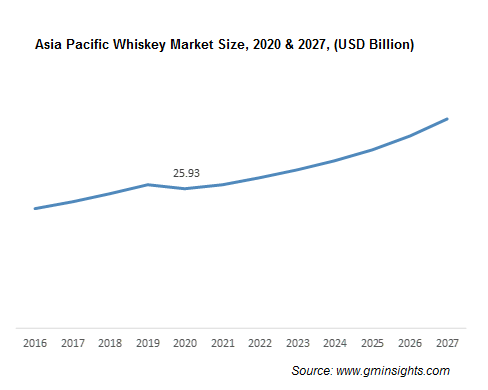 Asia Pacific whiskey market was valued at over USD 25.93 Billion in 2020 and is expected to witness a remarkable CAGR of 6.4% over the forecast period. This is mainly ascribed to the continuously increasing middle-class population in the region. India, followed by China and Japan dominate the market in Asia Pacific in terms of product consumption. Changing consumer taste for alcoholic beverages and increasing trend of socializing and having weekend parties, especially by youngsters in the region should further accelerate market growth. Increasing disposable income of people, increasing younger population legally eligible for consumption of alcoholic drinks and effective indirect marketing strategies being adopted by whiskey manufacturers for marketing their products is likely to further elevate product sales and augment the regional industry expansion.

For instance, in April 2019, Jiangsu Yanghe Diageo Spirit Co. Ltd, a joint venture company of Diageo plc. and Yanghe Distillery Co., Ltd (‘Yanghe’) launched ‘Zhong Shi Ji, a new premium full-flavored whiskey with a very smooth texture produced by maturing it in Chinese ceramic pots. In July 2020, Diageo plc. announced its decision to launch Johnnie Walker scotch whisky in plastic-free bottle packaging from 2021. Diageo plc currently makes use of 5% plastic in its whiskey bottle packaging and aims to further reduce the use of plastic to ensure environmental friendliness in its packaging. This innovation in packaging of whiskey bottles introduced by Diageo plc would enable the company to attract consumer attention and enhance its sales of scotch whiskey.

The Global Whiskey market research report includes in-depth coverage of the industry with estimates & forecast in terms of volume in Million Liters & revenue in USD Million from 2016 to 2027 for the following segments: