The rise in number of unintended pregnancies and growing inclination towards planned and delayed pregnancy across the country is propelling the market growth. Growing awareness due to supportive government initiatives and to prevent the unwanted abortions and pregnancies is leading to increase in demand for intrauterine devices in the U.S. The emergence of technologically advanced contraceptive devices leading to effective contraception with fewer side effects is further contributing to the market expansion. 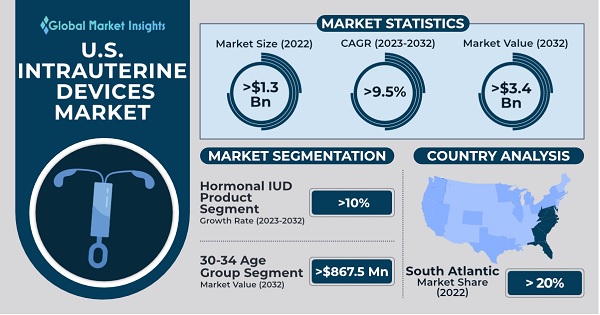 However, several cases of side effects of intrauterine devices have been reported in recent years. In the U.S. copper bearing IUDs are classified as combination products and are regulated as drugs by the FDA Center for Drug Evaluation Research (CDER). The approvals are granted through the New Drug Application route which generally requires robust clinical studies and appropriate safety studies to support the effectiveness and safety of the device.

The U.S. healthcare sector has been significantly impacted by the COVID-19 pandemic. The intrauterine devices market is majorly dependent on physician-administered and physician-prescribed. However, during the first few months of the ongoing pandemic, restrictions pertaining to physician office visits without an emergency were established, decreasing the demand for contraceptive products. Additionally, disrupted access to telehealth services and telecommunications in some areas of the U.S. is anticipated to limit the market demand.

Increasing awareness among the U.S. women regarding IUD applications

Rising awareness among the U.S. women regarding various IUD applications will majorly drive the market growth. According to an article, approximately 43 million women in the U.S. are at a risk of unintended pregnancy. The Center for Medicaid and CHIP Services (CMCS) has introduced a Maternal and Infant Health Initiative for the Children’s Health Insurance Program (CHIP) and Medicaid to promote the use of effective methods of contraception. This government initiative to improve reproductive health and family planning has significantly increased awareness and usage of intrauterine devices in the U.S.

Public health educators are engaged in creating awareness of contraceptive options through social marketing initiatives, such as creating video public service announcements, and utilizing social media for their distribution. For instance, adolescents could be reached through design and distribution of an educational video on basic IUD information. In addition, the American College of Obstetricians and Gynaecologists (ACOG) and the American Academy of Paediatrics (AAP) have recommended the use of IUDs for all women. The awareness has led to increased usage of intrauterine devices by women post pregnancy.

Growing preference for copper IUDs for lon-term use will spur the U.S. intrauterine devices market revenue

Copper IUD segment is anticipated to expand at 6.4% CAGR during the forecast timeframe owing to the long-term efficacy and improved design of copper intrauterine devices. A copper IUD is a long-term reversible birth control method that maintains fertility while still allowing women to prevent pregnancies. For instance, ParaGard, the copper IUD is over ninety-nine percent effective which has a long-term effect of around 10 years period.

In addition, copper intrauterine device is cost-effective than other contraceptive devices. According to the National Center for Biotechnology Information (NCBI), the copper IUD has a lower perforation rate than other intrauterine devices. Furthermore, the copper IUD is majorly preferred by women with serious health conditions because it offers reduced risk of pelvic infection and excellent pregnancy protection without exposing users to exogenous hormones.

Increasing usage of IUDs by women aged between 30-34 years 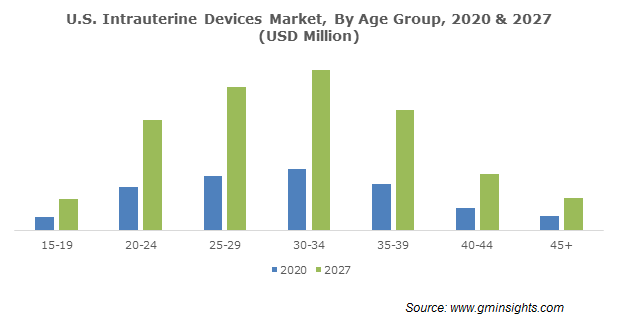 The 30-34 years age group segment is poised to grow at a CAGR of around 10% through 2027 driven by rise in number of women opting for planned delayed pregnancies in the country that has augmented the utilization of intrauterine devices.

Increasing demand for IUDs in the U.S. will boost the regional market growth 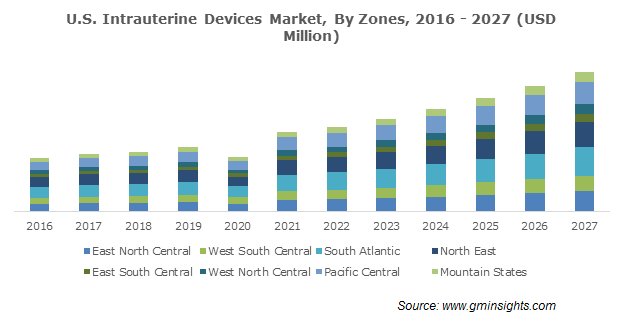 East North Central zone held more than 14% U.S. intrauterine devices market share in 2020 due to improved healthcare infrastructure and rising awareness pertaining to the usage of IUDs. Illinois is adopting Medicaid payment reforms to increase access to long-acting reversible contraception (LARC) including IUD. In addition, high number of unintended pregnancies are a serious health concern in Wisconsin. Thus, several programs in Wisconsin have increased patient access to long-acting reversible contraceptives (LARCs) including IUDs. This has augmented the demand for IUDs in the zone.

West South Central zone market is predicted to register 9.5% growth rate till 2027. Rising healthcare expenditure and favorable reimbursement scenario in the country is contributing to the market growth. In addition, according to a published article, around 32 births per 1,000 births in the teenage population were recorded in Arkansas in 2019. Thus, several awareness programs pertaining to unintended pregnancies are being conducted in universities and college campuses. As a result, the demand for IUDs has uplifted in the West South-Central zone of the U.S.

Some of the major players operating in the industry are Bayer AG and CooperSurgical Inc. These companies are making investments that enables these players to garner maximum revenue share. The players also focus on strategic mergers, acquisitions and collaborations in order to launch new products to expand their geographical presence and product portfolio of the industry.

The U.S. intrauterine devices market research report includes an in-depth coverage of the industry with estimates & forecast in terms of revenue in USD from 2016 to 2027, for the following segments:

The above information is provided for the following zones:

The U.S. market for intrauterine devices was over USD 900 million in 2020 and will expand at over 9.7% CAGR up to 2027 due to a significant number of unintended pregnancies.
The copper IUD segment share in the U.S. is expected to witness around 6.4% CAGR between 2021-2027 owing to advantages like enhanced design and long-term efficacy.
The 30-34 years age group segment is expected to register around 10% CAGR through 2027 as more women opt for planned delayed pregnancies.
The share of East North Central zone accounted for over 14% of the U.S. market during 2020 with developed healthcare infrastructure and higher awareness regarding IUD use.