Surveillance Radar System Market size exceeded USD 7 billion in 2020 and is anticipated to grow at a CAGR of over 7% from 2021 to 2027. The market growth is attributed to increasing government spending on military warfare systems due to growing geopolitical conflicts across the globe. 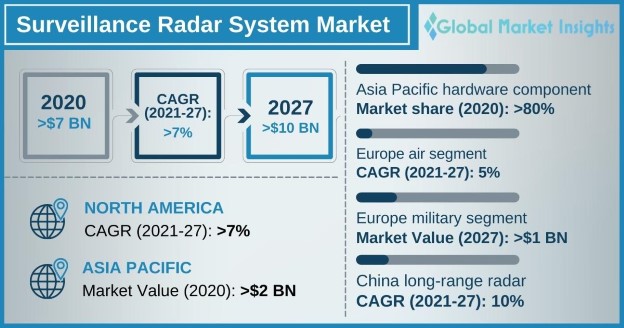 The major factor hampering the surveillance radar system market progression is the high maintenance cost associated with these products. High dependency on onboard equipment has increased the space requirement for installing critical components. Frequent maintenance and security system upgrading of surveillance radar systems credited to increasing attempts of a security breach by hackers are also adversely affecting the industry growth.

The production and industry expansion of surveillance radar system manufacturers were impacted due to the shortage of electronic components. However, the market witnessed significant growth in 2021 attributed to the increasing procurement of surveillance radars for the safety and security of forces as a part of the defense expenditure globally.

In U.S., short-range radar segment held 40% of revenue share in 2020. Short-range radars are used to detect and track flying targets at low altitudes. They are also used in a wide range of applications including border surveillance, security, air space monitoring, and vehicle protection.

The Europe military segment will reach USD 1 billion by 2027. A surveillance radar system is a crucial tool in the military as it is used to detect missiles, vehicles & aircraft. These radars can operate in challenging environments, making them a highly reliable device in the military sector. 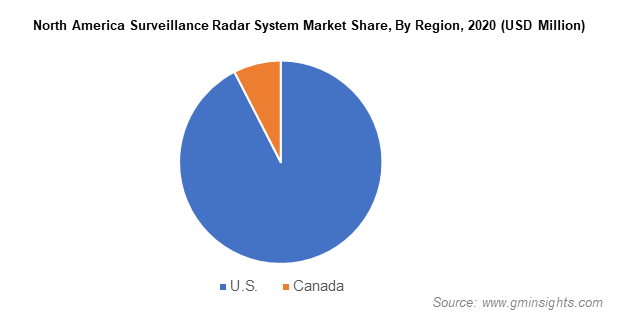 North America surveillance radar system market size was over USD 3 billion in 2020 and is estimated to attain a CAGR of 7% till 2027. The regional growth is credited to the high expenditure on military and growing technological advancements. Growing concerns over geopolitical threats from competitors, such as China and Russia, will bolster the development of surveillance radar systems during the forecast timeline.

The market research report of surveillance radar system includes in-depth coverage of the industry with estimates & forecast in terms of revenue in USD from 2021 to 2027 for the following segments:

Market size of surveillance radar system surpassed USD 7 billion in 2020 and it will observe around 7% CAGR between 2021 and 2027 on account of increasing investments in military warfare systems.
Europe air surveillance radar system industry could witness a 5% CAGR up to 2027 due to the development of new and existing airports.
Short range radar contributed around 40% share towards U.S. market in 2020 and will grow with demand for border surveillance, vehicle protection, and air space monitoring.
Hardware components in Asia Pacific accounted for around 80% of the market share in 2020 and will witness a similar trend due to the penetration of AI-equipped sensors and cameras.
Leonardo S.p.A., L3HARRIS Technologies, BAE Systems, Northrop Grumman Corporation, Raytheon Company, Thales Group and Lockheed Martin Corporation are some of the key players in in market.
Customize this Report
Inquiry Before Buying