Helicopter Market size surpassed USD 40 billion in 2019 and is poised to grow at a CAGR of over 3% between 2020 and 2026. Multiple scope of application in commercial and military along with capabilities of helicopters to operate in hostile environment is propelling the market growth. 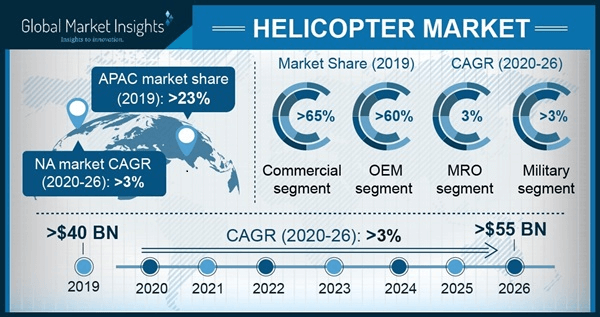 Helicopters have significant contribution in the military sector with their major scope of application in Medical Evacuation (MEDEVAC), Combat Search and Rescue (CSAR), airborne command post, and mitigating ground threats through aerial attacks. Such wide scope of application along with its capability to modify transport helicopter according to the military requirement is a major industry accelerator.

Helicopters are enabling transportation in remote locations, thereby improving search & rescue and medical emergency services. Capability to operate in hostile environment where aircraft and land transportation facilities are unable to function is improving the industry statistics.

Adoption of helicopters in disaster management will improve opportunities

The rising scope of applications in helicopter will improve the OEM’s whereas the requirement to upgrade the existing system will propel the MRO sales channel.

The average lifespan of a helicopter is approximately 20 years. There are several regulatory and technological reforms, which are induced within a span of 20 years. In order to maintain the air worthiness of helicopter with current market opportunities, there is significant MRO requirements.

For instance, in January 2020, various nations issued a mandate for the compulsion of ADS-B transmitter/receiver for aircraft. Though there are no current mandatory requirements for helicopter, a number of helicopter owners installed ADS-B through MRO to improve their airworthiness. Such incidents will stimulate the industry growth.

The military segment in the helicopter industry will witness high gains of around 3% till 2026. The growth can be attributed to increasing military expenditure at the global level to strengthen military capabilities. Helicopters can be easily modified as per their scope of application, catering to larger market share.

Technological advancements and modifications in defense helicopter will provide a positive impact to the MRO segment as well. Introduction of new developments, such as fly-by-wire controls, advanced Condition-Based Maintenance (CBM), advanced turbine engine, and Usage Monitoring Systems (HUMS), will lead to a massive expansion of the market.

Technological advancement in helicopter will impact the U.S. defense industry 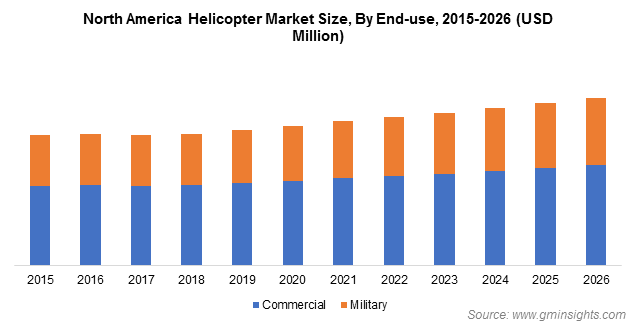 The North America helicopter market size is set to grow at a CAGR of over 3% during the forecast timeframe. The growth can be attributed to the rising requirement to modify and upgrade the nation’s existing defense fleet. Majority of the U.S. helicopter fleet are obsolete and require a major upgradation.

Except for V-22, there has been no major addition in military helicopter fleet since 1980. The U.S. Department of Defense (DoD) is planning to eliminate this gap through significant investments in R&D of vertical lift vehicles. Various programs pertaining to R&D, technological advancements, and modernization of vertical lift vehicles have been initiated by DoD, which will help augment market demand.

Asia Pacific held over 23% of the helicopter market share in 2019, spurred by growing investments by governments in defense, private as well as public sectors. Efforts of various governments across Asia Pacific to develop indigenous manufacturing capabilities are improving market prospects.

In 2018, China added 89 helicopters in its existing fleet, making it the largest market of APAC with a growth rate of 14% YoY. The growth can be attributed to favorable government policies pertaining to FDI.

In 2017, China portrayed approximately 60 preferential policies in the general aviation sector claiming to meet the requirement for search & rescue, short-term aviation, private flights, and entertainment. With respect to these changes, Bell Helicopter estimated that its fleet of 160 helicopters in June 2019 will double by 2022.

Major industry participants in the market are focusing on forging new long-term strategic alliances to new business avenues and enhance their market share. For instance, in October 2019, Boeing received a PBL contract for AH-64D/E Apache Attack helicopter worth USD 164.40 million.

As per the PBL contract, Boeing will receive an amount depending upon several specific outcomes such as the number of hours in air and level of readiness of this helicopter. This contract ensures air worthiness of the helicopter fleet over a long period of time.

The helicopter market research report includes in-depth coverage of the industry with estimates & forecast in terms of revenue in USD from 2015 to 2026 for the following segments:

The North America market is set to grow at a CAGR of over 3% during the forecast timeframe owing to rising requirement of North America to modify and upgrade its existing defense fleet.
The military application segment in the market will witness high gains of around 3% till 2026 led by increasing military expenditure at the global level to strengthen military capabilities.
According to this research report, the OEM segment dominated the industry share of over 60% in 2019.
The APAC region held over 23% market share in 2019 spurred by growing investments by governments in defense, private as well as public sectors.