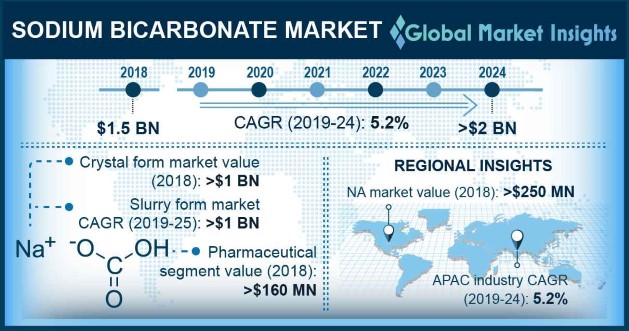 The market growth will be driven by increasing demand for convenience food across the globe due to busy and fast-paced lifestyle. A study says, Americans are preferring processed edible items over freshly baked products, which has significantly reduced the prices of food product over past few years. The consumers are choosing edible products which are ready to eat or take less time to cook or bake. The above mentioned trends will boost the convenience food sector and is likely to drive the sodium bicarbonate market size in future. The food industry uses sodium bicarbonate as an additive to regulate acidity, protect anti-caking, and enhance product shelf-life. The product is used in a wide range of products including confectioneries, ciders, dairy, cereals, increasing the volume of cakes, wafers, and crackers will drive the market. Usage of sodium bicarbonate in agrochemical is driven by practice of treating insects in farmlands and washing pesticides from fruits & vegetables. Furthermore, it is environment friendly natural agent therefore used in the form of pesticides in agricultural farm which will accelerate sodium bicarbonate market demand over the coming years.

Based on form, the sodium bicarbonate market is segregated into crystal/powdered crystal, liquid and slurry. Among these, crystal form sodium bicarbonate was valued over USD 1 billion in 2018 and will likely grow at significant rate by 2025. The product is usually used as a buffering agent, systemic alkalizer, topical cleansing solutions and an electrolyte replenisher. Slurry form sodium bicarbonate will witness the significant growth with more than 3.5% CAGR in future. The segment is majorly driven by increasing application in pharmaceutical and industrial in abrasives cleaning part.

Food & beverage, industrial, pharmaceutical, personal care, agrochemical and animal feed are the major end-users in sodium bicarbonate market. The other end-users include fire extinguisher, textiles, leather, etc. Among these, pharmaceutical segment was valued over USD 160 million in 2018 and is likely to grow with substantial rate in coming year. The product is used for the metabolic acidosis treatment and this may occur in severe renal disease, uncontrolled diabetes, circulatory insufficiency. Availability at low price and superior properties of sodium bicarbonate make it ideal for pharmaceutical application.

In terms of volume, Asia Pacific sodium bicarbonate market will experience significant growth rate of 5.2% from 2019 to 2024. Positive demand for sodium bicarbonate comes majorly from China, which has a rapidly growing population that utilizes the product on a large scale. North America region was valued more than USD 250 million in 2018 due to extensive utilization of sodium bicarbonates in various end-use industries. In North America, animal feed segment is expected to hold larger market size due to extensive consumption of animal feed products in order to increase the dairy products quality and quantity.

The sodium bicarbonate market is highly fragmented with the presence of a large number of players across the globe. Some of the prominent players in this market are Solvay SA, Church & Dwight Company, Ciner Group, ?i?ecam, Tata Chemicals, Natural Soda, and Ciech Group. The company is adopting organic growth strategies such as increasing production capacity to enhance penetration in emerging economies of Asia Pacific. It has commissioned the largest sodium bicarbonate plant of South East Asia in Thailand with an annual capacity to produce 10,000 ton to serve the healthcare, food, and other consumer markets in Asia.