Single Board Computer (SBC) Market size valued at over USD 1 billion in 2021 and is estimated to grow at more than 12% CAGR between 2022 and 2028. The market growth is gaining traction due to the increasing adoption of medical & healthcare devices around the globe. 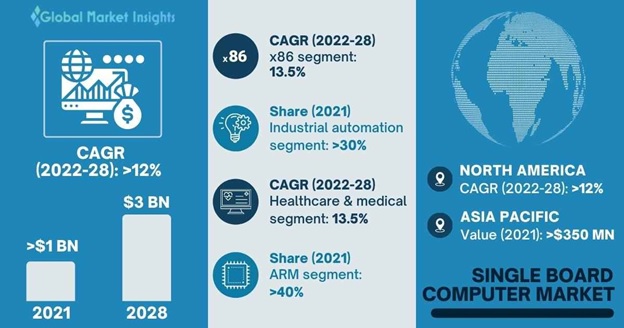 Medical devices, such as digital X-ray machine, ultrasound system, surgical robots, and CT-scanners, are incorporated with SBCs. The SBC offers several intuitive features such as multiple Input/Output (I/O) functions, low power consumption, high precision, and accuracy with compact device footprint in the market. The proliferation of IoT & AI technologies in medical devices will foster the market expansion during the forecast timeline.

The COVID-19 pandemic adversely affected the single board computer market in early 2020. In the first half of 2020, several governments and regulatory bodies-imposed trade restrictions and lockdowns, which resulted in raw material & component supply chain disruptions. The industry growth for SBCs also decreased in automotive, consumer electronics, and home appliances sectors owing to the shutdown of manufacturing plants worldwide. However, the growing Work-From-Home (WFH) trend across IT enterprises has spiked the industry demand for low-cost PCs and workstations that are incorporating SBCs, thereby positively supporting the industry expansion during the pandemic.

The x86 segment captured USD 650 million in 2021 and is anticipated to witness 13.5% growth rate through 2028. This growth can be attributed to the several advantages offered by x86 processors such as supports multitasking, fast clock-time generation, high-speed data processing, and high scalability. These advantages have prompted its acceptance in several industrial applications such as automation systems, computers, and robotics. In addition, the proliferation of IoT & AI technologies in transportation, entertainment, and medical & healthcare sectors is driving the market demand for advanced SBCs.

Several market participants are upgrading their existing processor technologies to scale up the SBC performance. For instance, in January 2022, AMD launched its new Ryzen 6000 series of processors to support high-speed computing in laptops. This processor is based on x86 architecture, which supports Windows 11 security features. The company is aiming to supply this new processor to electronic manufacturers that are located in east Asian countries, such as Taiwan, South Korea, and India, to accelerate its integration into new gen laptops. 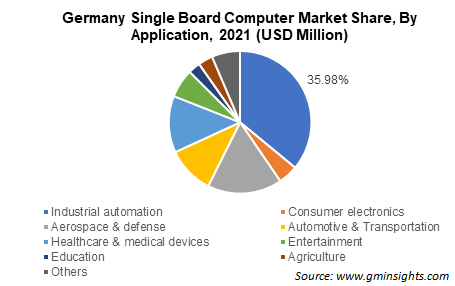 The industrial automation segment held 30% of the single board computer market share in 2021 led by the increasing penetration of robotics & automation across manufacturing and processing sectors. The manufacturing industry is highly integrated with collaborative robots, industrial robots, programmable logic controllers, and pick & place robots. The automation equipment uses SBCs for monitoring and in process control applications. The extensive penetration of industrial robots across developed economies, such as the U.S., Germany, Japan, and China, will stimulate the industry value. 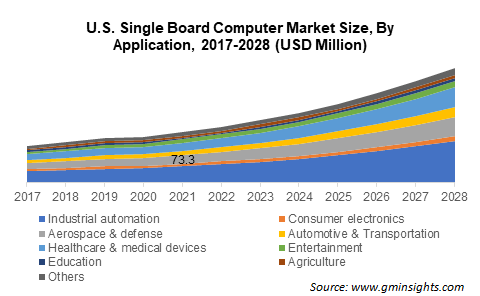 North America single board computer market is projected to attain a CAGR of 12% till 2028 on account of the rising demand for Unmanned Aerial Vehicles (UAVs) and drones from the aerospace & defense sectors. These UAVs are integrated with x86-powered SBCs that offer several advantages including faster processing and improved power-saving capabilities. In addition, rising government initiatives to impel technological advancements in the field of defense drones will support the industry progression.

The single board computer market research report includes an in-depth coverage of the industry with estimates & forecast in terms of revenue in USD from 2017 to 2028 for the following segments:

Market size of single board computer exceeded USD 1 billion in 2021 and could grow at a CAGR of over 12% through 2028 driven by rising adoption of medical & healthcare devices across the world.
The x86-based processors reached USD 650 million in 2021 and is poised to grow at 13.5% rate as it provides high-speed data processing, fast clock-time generation, high scalability and supports multitasking.
Industrial automation accounted for 30% of the market share in 2021 and is poised to grow owing to soaring penetration of automation and robotics in manufacturing and processing sectors.
North America market is expected to expand at 12% CAGR over 2022-2028 driven by growing government investments in military & defense sector.
Customize this Report
Inquiry Before Buying