Various types of rubbers such as styrene–butadiene rubber (SBR) and nitrile rubber (NBR) are used in tire manufacturing owing to their impermeable nature. SBR is being increasingly used in the tire industry due to its property to offer better oil and abrasion resistance. It also offers a better grip and lowers rolling resistance. Additionally, global tires market was approximately 3 billion units in 2015 and is anticipated to reach 4.2 billion units by 2024 owing to positively influence the rubber anti-tack agents market growth. 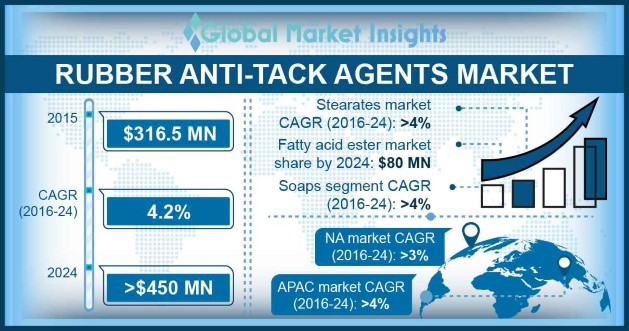 The product is used to remove the cohesive property of rubber products, which are then used in end-user industries such as medical and industrial. Rubbers, such as nitrile butadiene rubber (NBR), play an important role in the medical field, serving multiple purposes. One of the major NBR applications is nitrile gloves manufacturing for medical and industrial purposes. These gloves are used to prevent transmission of viruses from one source to another, which makes them vital in healthcare industry.

Increasing health concerns and awareness related to prevention of transmission of viruses and rising need for safety in industries are major factors driving the NBR rubber gloves business growth. This, in turn, is the key factor propelling the global rubber anti-tack agents market share over the forecast timeframe.

Certain stearates including lead, are under serious threat due to environmental regulations associated with them. These are primarily used in PVC processing and compounding applications. Furthermore, zinc stearate is another product that has been witnessing limited usage due to stringent environmental regulations owing to hamper industry growth by 2024. However, increasing SBR production and usage, particularly in Asia Pacific, in end user industries such as automotive has created new growth opportunities for the industry participants.

Stearate based rubber anti-tack agents was dominant in 2015. However, the segment is analyzed to witness slow gains owing to stringent environmental regulations. Fatty acid esters used in the industry generated revenue of more than USD 55 million in 2015. Glycerol monostearate (GMS) and natural fatty acid esters such as isoamyl laurate are also used in uncured rubber. These are of the key materials used to eliminate substrate adhesive property. 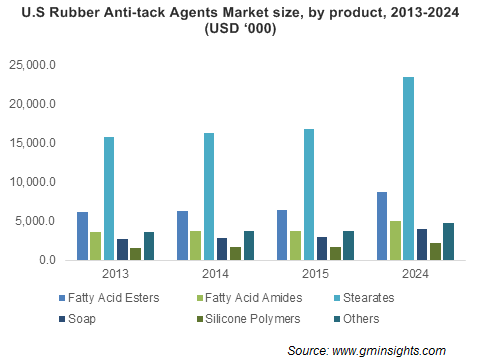 Soaps used as anti-tack agents are projected to witness gains exceeding 4% CAGR over the forecast timeframe. Soaps or slab dips as release agents serve an important role in rubber compounds processing and uncured rubber polymers. These processing chemicals are used to avoid adhesion during storage and help in enhancing production yield and performance during the manufacture of rubber. Slab dips used in the rubber industry are powdered water-dispersible agents that are manufactured as liquid soaps.

North America led mainly by the U.S. was valued at over USD 40 million in 2015. Regional growth is mainly attributed to rising awareness to maintain hygiene by restricting virus and bacteria transmission. In addition, the U.S. has the largest aging population globally, which increasing nitrile glove demand due to large number of nursing homes and high medical expenditure.

Asia Pacific, mainly led by India, Malaysia and China was dominant in 2015 and is forecast to experience gains of more than 4,5% CAGR over the forecast timeframe.  The growth was majorly driven by robust growth in the regional automotive industry. In addition, Malaysia is the largest rubber manufacturer globally owing to boost the rubber anti-tack agents market growth by 2024.

The industry is witnessing high competition among major players in the past few years due to high capital expenditure. Intense competition is evident among major players in the market, especially in Asia Pacific and North America owing to presence of major production facilities for fatty acid esters in these regions. Various manufacturers have entered partnerships and collaborations with raw material suppliers in strategic regions such as Asia Pacific. These partnerships are expected to lower raw material procurement costs for producers. Additionally, these manufacturers have established production facilities in several regions to cater to growth in the end-user industry in Asia Pacific. Key players in the market constantly strive to increase their profitability through new product development and technological advancement.

Anti-tack agent demand in tires has been increasing due to rapid growth in the automotive industry. Anti-tack agents are widely used in the rubber industry for eliminating the self-sticking property of rubber substrates. However, growing modifications in processing and rapid production in end-use industries such as automotive is fueling demand.

Rubber anti-tack agents market report includes in-depth coverage of the industry, with estimates & forecast in terms of volume in tons and revenue in USD from 2016 to 2024, for the following segments: