Resin Capsule Market size was more than USD 750 million in 2018 and will witness gains over 5.5% CAGR during the forecast timespan. 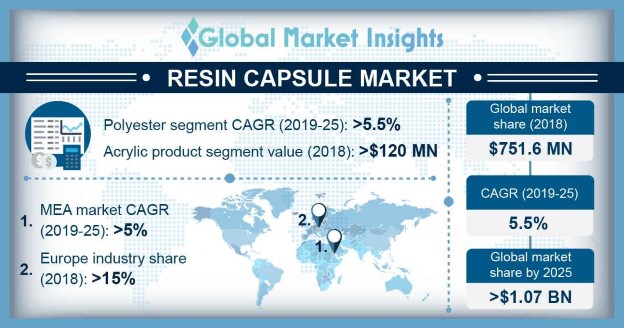 Mining was the largest end-user segment in resin capsule market and accounted for more than 60% share in 2018. Resin capsules are used to fix the rock bolts in sidewall and roof in mining industry. It allows ease of installation in a roof support and reduces the human errors. Increasing and tightening safety standards in the mining will propel the product demand in coming years. Moreover, rapidly growing mining industry in the Asia Pacific will have positive impact on the resin capsule demand over the forecast period. According to Forbes, China is responsible for around 45% of global coal production and more than 50% of the demand. Owing to the increasing energy demand from manufacturing industry in the country, China’s coal production is rising with a healthy CAGR from past few decades. China has approved nearly USD 6.7 billion worth new coal mines last year due to which its coal production witnessed a growth rate over 5% and reached over 3.5 billion tons in 2018. 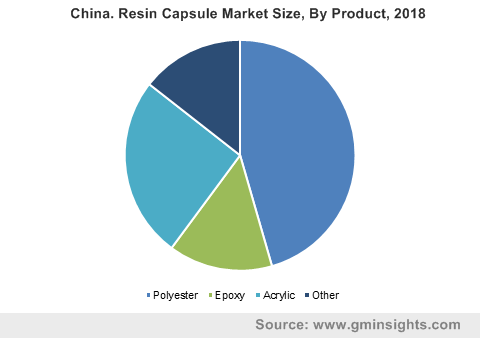 Polyester resin capsule was having the major market share in resin capsule market 2018 due to high product usage in mining industry due to its properties such as reliability, controlled setting time, distributed anchorage and chemical & corrosion resistance. In addition, product usage in tunnelling from past few years growing with a rapid CAGR as it is highly useful for rock stabilization. Epoxy was one of the major product segments in 2018 and forecast to grow with a prominent CAGR of 5.2% during the forecast time period. Rapidly growing manufacturing industry in the emerging economies such as India, Indonesia, South Africa, Brazil, Russia will drive the product demand in coming years.

Superfast resin capsule was the most lucrative product type in 2018 and anticipated to grow with significant CAGR of 5.7% during the forecast timespan. Quick setting time is the major advantage due to which it will witness highest growth rate by 2025. It is used in the mining at the toe of the hole to grout the bolt quickly. Slow resin capsule was the one of the major product types in resin capsule market and projected to experience the substantial growth numbers in the coming years. It is majorly used at the end of hole for fixing and grouting.

Construction was the one of the lucrative end-user segments in the resin capsule market share in 2018 and is forecast to grow with a CAGR over 4% during the forecast period. In construction, it is used in rock bolting applications across tunneling and dam construction. Growing infrastructure development and road connectivity across the globe will propel the resin capsule market growth in coming years. Chinese government has launched One Belt One Road (OBOR) initiative in 2013 to revive the ancient silk route and increase the connectivity between China and other regions. Chinese government will invest over USD 1.2 billion for the same. Such initiatives are likely to fuel the product demand over the forecast period. Moreover, most of these roads are going through the hilly areas such as Gilgit-Baltistan, were tunnels are built in high numbers.

Asia Pacific was the largest region in resin capsule market size in 2018 and accounted for over 60% share in the same year. High growth in the end-use industries in the region were the major factors resulting in such massive demand share captured by the region. Mining, construction and manufacturing industries in the region are growing with a prominent CAGR from past few years and is expected to grow with a same pace in coming years. Countries in the region such as China, Australia, and India are showing the significant growth in mining output from past several years. For instance, according to the Australian Bureau of Statistics (ABS) Australian mining output from past several years growing with a CAGR near to 3%. Coal mining output in the country has grown from USD 11.4 billion in 1998 to USD 65.6 billion in 2018. Moreover, growing construction and mining industries in the Middle East and Africa will have positive impact on the product demand over the forecast period.

Mining, construction and manufacturing industries are evolved over the years to develop support system in order to reduce casualties in mining and construction industry. They are majorly used as an anchoring medium for cable and rock bolts to provide roof and sidewall support in underground activities. Tightening mining and workers safety regulations across the globe are propelling the resin capsule demand in the mining and construction industry, though they are little expensive compared to the cement and other roofing bolting materials. It has reduced the installation time and reduced the incorrect installation.