Organic peroxide market size was around USD 2 billion in 2020 and will grow at a CAGR of 4.2% from 2021 to 2027 owing to the increasing demand from the polymer industry across the globe. In terms of volume, the market share is projected to expand at a CAGR of 3.7% while recording a valuation of 545.20 Kilo Tons. Organic peroxide is a carbon-containing compound holding two oxygen atoms together. Organic peroxides and different compounds with organic peroxide are utilized as initiators, activators, catalysts, accelerators, curing agents, hardeners, cross-linking agents, and promoters. 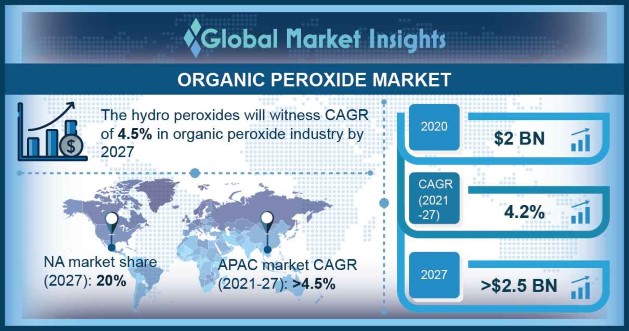 These are extensively used as initiators in the procedure of polymerization to manufacture various sorts of polymers. The mounting demand for thermoplastics and polymers across numerous industrial applications is expected to bolster the organic peroxide market growth during the assessment period. This specialty chemical also attains applications in adhesives, coatings, textile, rubber, and paper industries, among several others. The increasing penetration of the end-use industries in emerging regions around the globe is estimated to record considerable growth.

The industry is driven by the rising demand from several end-use industries such as automotive, construction, electrical & electronics, and composites. The demand for organic peroxide as a catalyst in manufacturing commodities for packaging, personal care, and detergents is estimated to fuel the organic peroxide market share during the forecast period. The increasing usage of engineered plastics has enhanced the existing manufacturing capacity of the plastic sector, thereby intensifying the requirement for organic peroxide in polymerization processes. Furthermore, rapid urbanization, increasing infrastructure activities, and industrialization are expected to enhance the demand for plastic.

However, organic peroxides are known to be extremely hazardous and may cause critical fire and explosion threats if not transported with proper safety measures. Peroxides are, in general, chemically volatile and can simply fester due to the releasing of heat in high temperatures. These released vapors are flammable in nature. Owing to these product properties, organic peroxides are conveyed in lesser quantities. 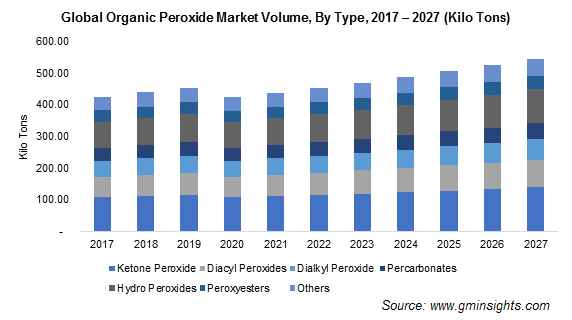 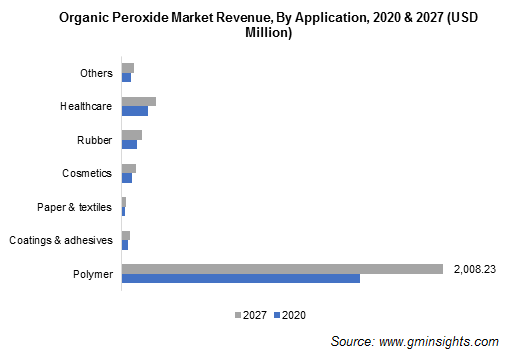 The polymer segment will generate around USD 2 billion by 2027 owing to the growing production of various polymers which will enhance the product demand in the polymerization process. The growing demand for ready-made clothing along with the rising penetration of paper in a wide range of industrial sectors is projected to generate organic peroxide market revenue gains during the forecast period. 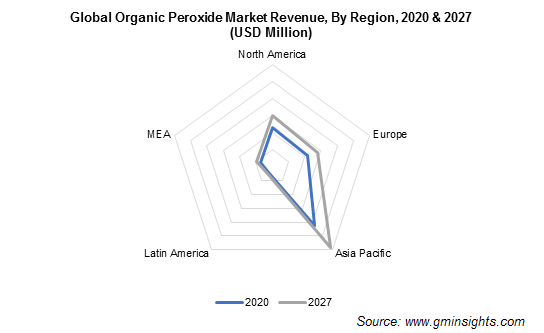 The Asia Pacific region will witness over 4.5% CAGR global organic peroxide market from 2021 to 2027 owing to its demand in various end-use industries. Asia Pacific is one of the major producers and consumers of plastic products, and this trend is expected to continue over the next few years. The emergence of China and India as major plastic/polymer and rubber manufacturing destinations is expected to promote the demand for organic peroxide over the near future.

Latin America will generate around USD 100 million by 2027 is mostly dependent on imports, such as polymers, rubbers, and chemicals, from China and European countries to fulfill its regional demand. Such trends are restraining the industry growth in this region. With the growing retail sector mainly in Brazil and Mexico, the demand for various packaging products has been growing at a considerable rate.

The organic peroxide market report includes in-depth coverage of the industry with estimates & forecast in terms of volume in kilo tons and revenue in USD million from 2017 to 2027 for the following segments:

The organic peroxide market is expected to achieve $2.5 billion by 2027 and will expand at a CAGR of 4.2% between 2021 and 2027.
The ketone peroxide consumption will reach nearly 140 kilo tons through 2027 owing to the rising production of fiberglass.
Polymers will account for a share of USD 2 billion through 2027 due to the surging demand for ready-made clothing and the increasing penetration of paper across a wide range of industrial sectors.
Asia Pacific organic peroxide industry will register a CAGR of more than 4.5% from 2021 to 2027 propelled by the increasing product demand across various end-use industries.
Customize this Report
Inquiry Before Buying