Pumped Hydro Storage Market size was valued at over USD 300 billion in 2019 and is anticipated to surpass cumulative installation of 200 GW by 2026. 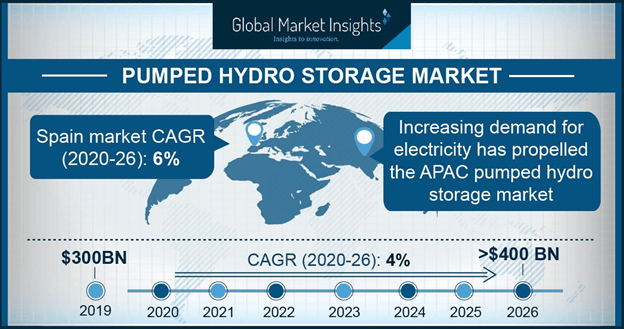 Pumped hydro storage is a type of hydroelectric energy storage technology which is used for load balancing. The storage system consists of two reservoirs located at different heights. The water stored in upper elevated reservoir is used to run the turbine and generate electricity during peak hours and the water collected in the lower reservoir is pumped back to the upper reservoir when the consumption for electricity is low. The system manages the excess generation capacity, supports the integration of renewables along with efficient & reliable functioning of the grid. The study includes a detailed analysis of the PHS technology deployment scenarios bifurcated on a regional and country basis across open-loop, closed loop and innovative systems. Furthermore, the estimates and forecasts are associated with data signified by various regulatory authorities including DOE, IEA, IRENA, EASE and associated company press release and investor presentations.

The increasing adoption of renewable energy technology coupled with favorable regulatory policies toward expansion & upgradation of existing grid network will boost the pumped hydro storage market. The European Union in 2018 granted USD 360.5 million toward Baltic electricity synchronization project. The projects aim to enhance the reliability and security of electricity system by connecting the Baltic network with Continental European Network (CEN). The ongoing infrastructure spending toward the development of urban areas along with increasing electricity consumption across the developing nations will augment the industry growth. In addition, constant reforms pertaining to the integration of clean storage systems favored by energy-efficiency reforms will complement the business outlook. Furthermore, advancement in technologies to enhance the operational flexibility of plants and growing initiatives toward the reduction of carbon footprints will positively influence the product demand. 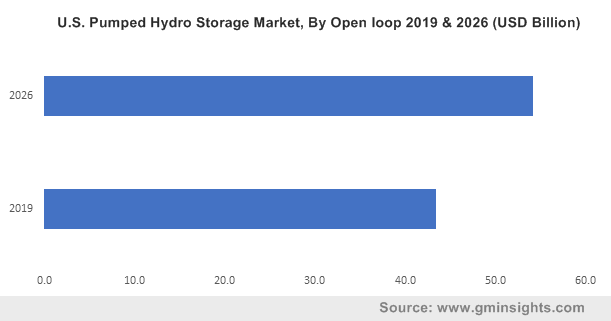 The direct connection with natural water resources makes open loop pumped hydro storage fit for multiple geographies. The availability of water streams along with the high cost associated with the development of competitive systems encourages the product deployment. In addition, the ongoing integration of renewable energy generation technologies along with the favorable policies and regulations pertaining to environmental emissions will complement the industry outlook. Relatively low cost associated with its construction and refilling of upper reservoir will stimulate the industry growth. However, adverse impact on ecosystem of aquatic life, fish passage, and the distortion of the natural flow of water owing to diversions may act as an industry restrain.

Increasing concerns toward security of supply along with ongoing adoption of sustainable energy technologies will propel the industry growth. The increasing demand for electricity from industrial & urban establishments coupled with the favorable government policies toward clean energy technologies will boost the product demand. In addition, positive outlook toward electrification program coupled with the expansion of power infrastructure has instituted a competitive business scenario. The industry players including Enel, Genex, EDF and GE Alstom are extensively working toward research & development to enhance their presence across the region. Furthermore, stringent government regulations toward carbon emissions coupled with accelerating need for grid stabilization will complement the business outlook.

Increasing demand for reliable and uninterrupted electricity supply along with expansion and upgradation of existing grid infrastructure will augment the market. Ongoing investments toward development of microgrid network along with integration of advanced distributed generation technology will fuel the industry growth. In addition, promising regulatory measures including water programs, incentives, subsidies, and fiscal & asset leveraging schemes have instituted a favorable business scenario.

The equipment manufacturers play a crucial role in the value chain as variations in the cost of turbines and other equipment will impact the overall price of the PHS systems. The companies are also involved in the extensive R&D and design & manufacturing of turbines, generators and components which have provided these companies a competitive edge in the industry. In addition, advanced technology installation and development of low-cost storage systems are some of the key strategic initiatives adopted by the industry players. Furthermore, the companies are also adopting strategies for capital budgeting and to achieve economies of scale in long run.

Pumped Hydro Storage market research report includes in-depth coverage of the industry with estimates & forecast in terms of “GW” and ‘USD” from 2015 to 2026, for the following segments: