Energy Storage Systems Market size surpassed USD 340 billion in 2018 and is set to achieve over 6% CAGR up to 2025. Increasing demand for continuous electricity supply along with growing focus toward renewable energy power generation will drive the global energy storage systems industry growth. 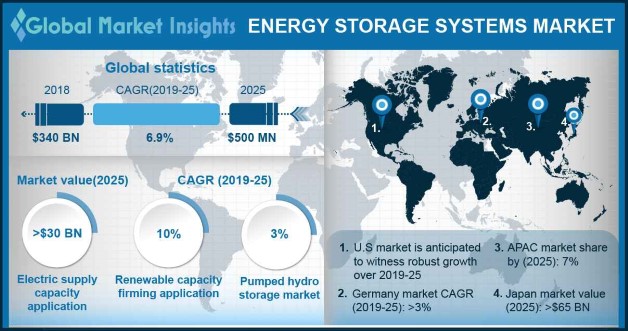 According to the International Renewable Energy Agency (IRENA), the total U.S. installed renewable energy capacity witnessed an increase from 127 GW in 2009 to over 245 GW in 2018. Ability of storage systems to capture and store the electrical and thermal energy for later utilization are some of the key underlying factors making its adoption preferable.

Government policies & measures to minimize carbon emissions along with growing concerns toward grid stability will stimulate the industry growth. In December 2017, the government of China announced the commencement of the first phase of the Emission Trading Scheme (ETS) to reduce GHG emissions. The ETS will focus on the power sector covering about 3.5 billion tons of carbon dioxide and the full scheme is anticipated to be implemented by 2019.

Surging demand to integrate large-scale clean energy systems along with favorable measures to promote adoption of sustainable solutions to minimize carbon emissions will stimulate the electro-chemical energy storage demand. In addition, technological innovations to improve the performance & efficiency of batteries will further enhance the business landscape.

Energy storage systems market from electric supply capacity application is set to surpass USD 30 billion by 2025. Growing demand for cost effective and uninterrupted power supply across off grid locations will positively influence the product adoption. In addition, intermittent nature of renewable energy sources has created an increased demand for efficient storage technologies. As per the EIA, in the U.S., renewable based electricity generation increased from 382 MWh in 2008 to 742 MWh in 2018.

Energy storage system deployment for the renewables capacity firming application will witness growth on account of increasing investments toward expansion and integration of wind and solar energy plants. These systems can smooth the output and control the ramp rate by eliminating the rapid voltage & power swings on electrical grid which make its adoption preferable. 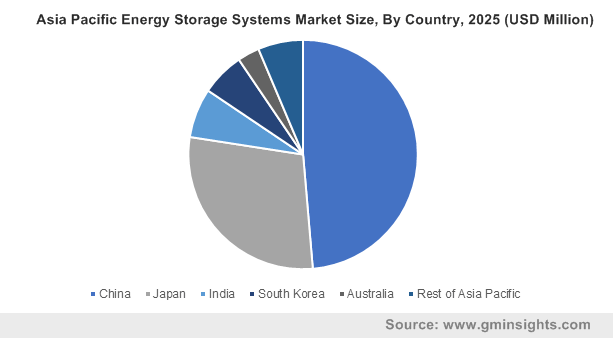 The Asia Pacific energy storage systems industry will witness over 7% CAGR up to 2025. Surging demand for uninterruptable & reliable power supply along with increasing efforts to reduce fossil fuel dependency by promoting utilization of renewable energy technologies are some of the paramount factors which will propel the business growth.

For instance, in May 2017, the California Public Utility Commission (CPUC) implemented Assembly Bill 2868, obligating its investor owned utilities for the procurement of additional 500 MW of distributed energy storage.

Energy storage systems deployment across Europe is set to experience significant growth by 2025. Ongoing efforts to minimize the carbon footprint along with surging investments toward development of green economy will drive the industry growth.

As per the European Commission, EU's Research and Innovation Programme Horizon 2020 will invest USD 6.57 billion in energy projects between 2014 and 2020. The aim of the project is to improve the performance of clean energy technologies which include tidal power, energy storage and energy networks.

Business expansions, new technological innovations and mergers & acquisitions are some of the significant initiatives undertaken by prominent industry players. Furthermore, the key competitors are involved in R&D activities to sustain a competitive edge over other market participants.

Energy storage system is a technology that stores energy in the form of heat and electricity which can be utilized later whenever required. Pumped hydro storage is the most prominent ESS technology being deployed followed by the other systems including electro-chemical, electro-mechanical and thermal.

Energy Storage Systems market research report includes in-depth coverage of the industry with estimates & forecast in terms of MW and USD from 2014 to 2025, for the following segments:

The above information is provided on a regional & country basis for the following: