Photorejuvenation Devices Market size was valued at USD 1.6 billion in 2018 and is expected to witness 6.6% CAGR from 2019 to 2025. In addition, the volume of Intense Pulsed Light (IPL) product type procedures is set to exceed 242,272 thousand procedures by 2025. 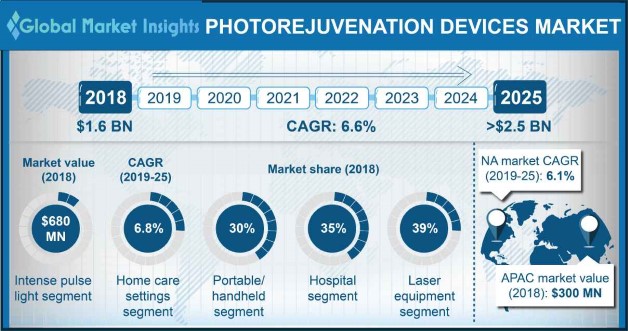 Recently growing prevalence of skin disorders has been leading to scarring. According to the American Academy of Dermatology, acne is considered as the most common skin disorder in the U.S. which is affecting around 50 million individuals yearly. Acne usually causes significant physical changes, which include permanent scarring. Laser resurfacing is considered as most commonly used non-invasive treatment for acne scarring. Thus, the growing prevalence of skin disorders directly contributes to driving the photorejuvenation devices market over the forecast period

Intense Pulsed Light (IPL) product segment is projected to witness more than 6.6% growth over the analysis timeframe. Advancements in technology coupled with the growing adoption of IPL devices for applications like hair removal, wrinkle reduction, scar rejuvenation, acne control, freckles, and others are anticipated to contribute to the segmental growth.  Intense pulsed light devices are considered as low-cost entry into the aesthetics industry and smart addition to the clinical settings. IPL treatments are regarded as one of the topmost requested cosmetic procedures.

Laser equipment segment accounted for around 39% revenue share in 2018 in the photorejuvenation devices market over the forecast period. Increasing healthcare expenditure is considered as an indicator of improvement in the healthcare setting. The upsurge in the budget of hospitals in developing countries would further indicate the usage of better-quality laser equipment and thus drive the growth of the aesthetic industry market.

The portable photorejuvenation devices segment is anticipated to hold a significant revenue share in 2018 and is projected to witness growth of 6.8% over the forthcoming years. The segment growth is attributable to rising preference of portable devices among the physicians and target population over standalone devices as it minimizes the number of sessions required for treatment and yield faster clearing of tissue. 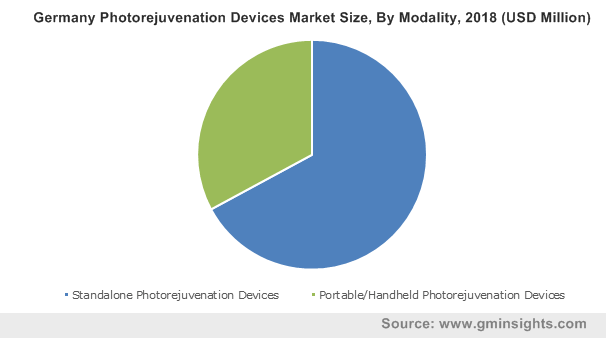 The hospitals segment is expected to hold a significant market revenue share of around 35% in 2018 and is anticipated to exhibit momentous growth during the forthcoming years. Rising prevalence of skin problems increases the demand for photorejuvenation devices in the hospital which would further drive the aesthetic devices market.

Dermatology clinics are expected to hold the considerable market share in the photorejuvenation devices with a growth rate of around 6.0% over the forthcoming years. Dermatology clinics offer photorejuvenation treatment at low prices compared with other end-use settings, which directly contributes to the segment growth. Furthermore, growing inclination of the target population towards non-invasive treatment for wrinkle reduction and scar removal is expected to boost the growth of the market.

North America market is estimated to witness a growth pegged at around 6.1% CAGR over the analysis timeline. The regional growth is majorly attributed due to the presence of established manufacturers with robust product offerings. Also, technological advancements and affordability of photorejuvenation treatment among the general population are further anticipated to boost the North America photorejuvenation device market growth. 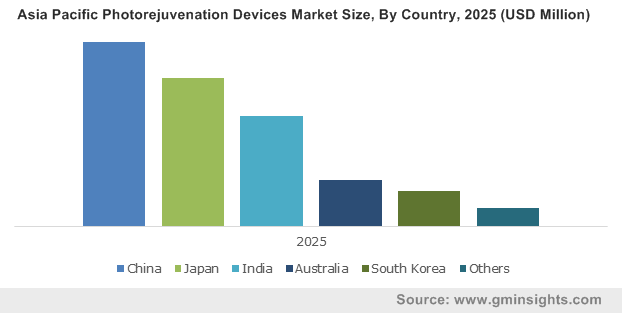 Over the past few years, it has been observed that the medical aesthetics industry has evolved drastically with the introduction of new technologies. Photorejuvenation devices provide different light wavelengths to target a broad range of applications. In 1995, the first intense pulse light device obtained FDA approval for lower extremity telangiectasias treatment. Since then the evolution of photorejuvenation industry is being triggered by the increasing adoption of IPL device in the end-use settings. The favourable cost of the device has led to the rapid use in several clinical settings. However, besides the early claims of having adverse many side effects and less efficacy, innovations in technology have resulted in the development of more predictable, and reliable aesthetic devices in the market.

The market size of photorejuvenation devices exceeded USD 1.6 billion in 2018.
The industry share of photorejuvenation devices is expected to witness 6.6% CAGR from 2019 to 2025.
Some of the factors such as favorable regulatory approval, trend for non-invasive surgical procedures and rising burden of skin disorders are likely to fuel the demand for photorejuvenration devices globally.
Proliferation in technology and increase in the adoption of IPL devices for scar rejuvenation, hair removable, wrinkle reduction, and acne control will serve as a catalyst in spurring the traction of IPL products in the industry landscape.
Robust product offerings and technological advancements in North America have made the region a favorable investment destination in photorejuvenration devices industry.
Leading companies are focusing on portable photorejuvenation devices owing to the increasing trend for portable devices among stakeholders pertaining to the fact that they reduce the number of sessions needed for treatment.
Customize this Report
Inquiry Before Buying