Paraffin Inhibitors Market size was valued at USD 655.5 million in 2020 and will grow at a CAGR of 5.0% from 2021 to 2027. A rapid rise in demand for specialty chemicals and petroleum products will escalate the market growth.

Paraffin inhibitors are mainly used to prevent wax formation during the production of crude oil in the oil & gas sector. These products are also known as Pour Point Depressants (PPDs) owing to their ability to reduce gelling of wax along with improving the fluidity of the crude oil. The product assists in reducing Operational Expenditure (OPEX) for manufacturers in the long run. 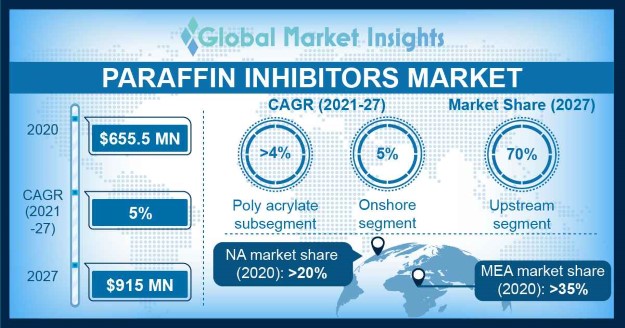 These trends have led to an increase in the consumption level of paraffin inhibitors in the oil & gas sector over the past few years. Rising oil & gas exploration activities around the globe are expected to drive the product demand over the projected timeframe. The proliferation of unconventional onshore oil production in the U.S. will stimulate the paraffin inhibitors market growth. Additionally, the increasing demand for oil & natural gas in the end-user industries will create a need for developing crude oil capacities, which will further drive the consumption level of paraffin inhibitors at significant rates.

The COVID-19 pandemic has significantly hit the global oil & gas sector owing to the shutdown of the industrial sector and the implementation of social distancing norms. The global petroleum & other liquids production value was estimated to decline by 6.3% in 2020 to reach 94.25 million barrels per day. This change will affect product demand as the majority of paraffin inhibitors are consumed at the upstream level. Shutdown or partial closure of automotive facilities around the globe has created a sharp decline in sales volume of petroleum products. Such trends will limit paraffin inhibitors market expansion in 2020. 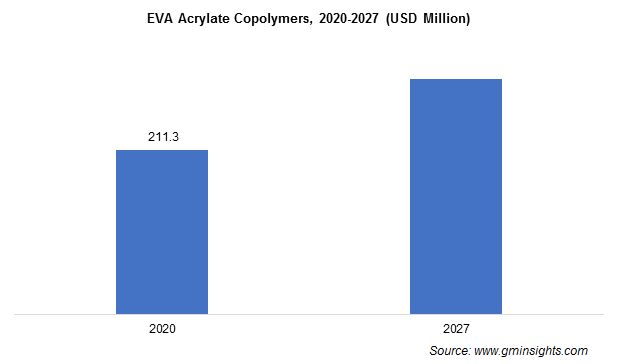 EVA acrylate copolymers are blends of polyacrylate and ethylene vinyl acetate and the segment generated over USD 200 million in 2020 towards paraffin inhibitors market share. The product is available in both liquid & solid forms and possesses a solid content of more than 50%. It can be used as a wax inhibitor and pour point depressant owing to its excellent performance and ability to drop pour point up to -5ºC. Growing oil & gas production across the globe is expected to increase segment growth over the forecast timeframe.

Upstream sector application to remain staple across the industry

The upstream segment will hold around 70% share and is attributed to higher product consumption in exploration & production activities of crude oil. Global oil consumption is increasing at a steady rate, which is creating a need for crude oil and natural gas capacity expansion.

Emerging countries are highly dependent on conventional resources to meet their domestic demand, which is a key reason behind the high share of conventional onshore oil production in the global market. Such trends will propel demand for additive solutions across exploration & production activities of the oil & gas sector, which will further complement paraffin inhibitors market growth. 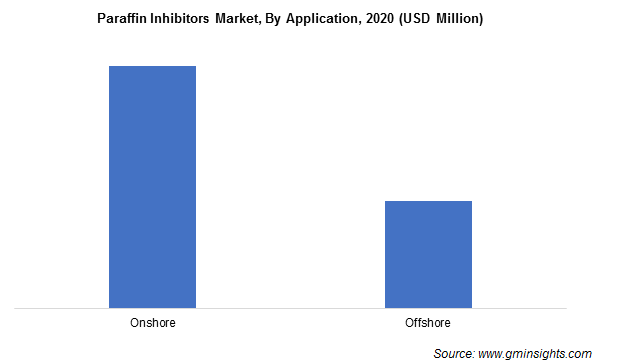 The offshore application will witness around 5% CAGR in paraffin inhibitors market size. This can be attributed to growing investments for offshore oilfield projects across the globe. The short-term break-even cycle of offshore projects will form the basis for their development in emerging countries over the coming years. The deep offshore is estimated to contain more than 300 billion barrels of world liquid hydrocarbon resources, which is further driving oil & gas companies to explore offshore areas. 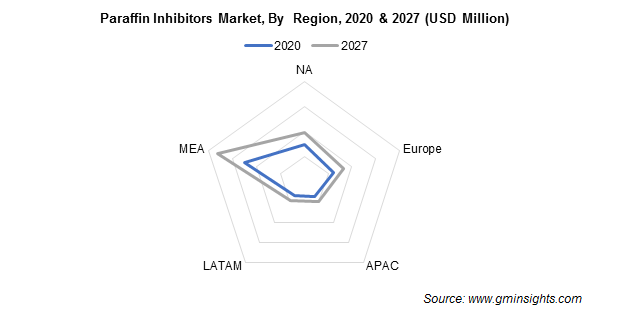 In 2020, the Middle East & Africa region accounted for over 35% share in paraffin inhibitors market, which is attributed to rising investments from major oil & gas companies in the region. Major countries including Saudi Arabia, the UAE, Qatar, & Iraq are expected to witness tremendous growth in oil production in the coming years. The region has a vast amount of oil reserves, which account for the major share in GDP.

For instance, Saudi Arabia oil & gas production accounts for more than 50% of its GDP and around 70% of export earnings. Furthermore, major companies are planning to invest in the Middle East & Africa oil & gas sector. For instance, BP Plc has announced major projects in the Middle East, which are related to oil exploration and production in 2020.

Furthermore, the region is expected to see huge upstream investments from major oil producers over the coming years, which may drive the paraffin inhibitors market sales by 2027. For instance, oil & gas companies invested approximately USD 8.1 billion from 2015 to 2019 in offshore exploration & development activities in Guyana.

Expanding R&D is a key trend observed in the market

The paraffin inhibitors market report includes in-depth coverage of the industry with estimates & forecast in terms of volume in kilo tons and revenue in USD million from 2017 to 2027 for the following segments:

The global market for paraffin inhibitors had reached USD 655.5 million in 2020 and will expand at 5% CAGR up to 2027 with the increasing demand for petroleum products and specialty chemicals.
The paraffin inhibitors industry share from applications in the offshore segment will witness around 5% CAGR owing to the rise in investments towards developing offshore oilfields.
The industry size form EVA acrylate copolymers demand was valued at over USD 200 million during 2020 and will grow with the expanding oil & gas sector worldwide.
The Middle East and Africa region held more than 35% share in 2020 due to consistent growth in investments from leading oil and gas companies.
Customize this Report
Inquiry Before Buying