p-Ethylphenol Market size exceeded USD 95 million in 2020 and is estimated to grow at over 6.6% CAGR between 2021 and 2027. Increasing interest from the pharmaceutical industries into organic chemical application in medicinal drug manufacturing activities shall actively accelerate the global market demand. 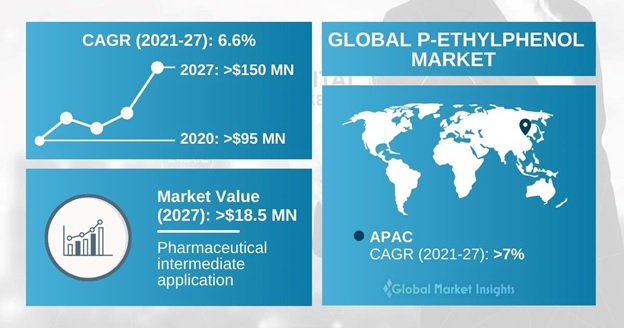 p-Ethylphenol, also known as 4-ethylphenol is a crystalline, weak basic organic compound found in species ranging from humans to bacteria. It is widely used as solvents in various industries such as cleaning and degreasing as a processing aid and is also used for the production of phenolic resins and varnishes. It is also used as an intermediate for dyes and pharmaceuticals. Increasing government support for promoting innovative healthcare support in the form of medicinal drugs is further strengthening the product demand as a vital base ingredient.

The chemical industry has the widespread application of chemical synthesis from p-ethylphenols as their source. It acts as a base material for the production of various antioxidants which are further used in the manufacturing of polymers and rubber. Extending to its effectiveness it is also used as a solvent in the cleaning and degreasing of metal surfaces, corrosion inhibitors, rust inhibitors, and many allied applications.

Asia Pacific being the major contributor to this increase in market demand is the leading region to implement the regulations of the pharmaceuticals market and is constantly driving expansion has also assisted the product demand. This region is also witnessing growing investment in preventive & personalized medicine along with biotechnology for the development of effective drugs, which should accelerate market growth.

The product has potential antioxidant properties that are capable to safeguard material cells from oxidation and inflammation. Thus, rising demand for natural and organic sources of preparation of antioxidants in animal and human healthcare and nutrition formulation will propel product demand.

Extensive product usage as a prominent ingredient, especially in preventive drugs, dyes, coatings, and chemical synthesis have enhanced the market statistics. However, p-ethylphenol has been considered as a "Hazardous Chemical" by the 2012 OSHA Hazard Communication Standard which may restrain market demand. 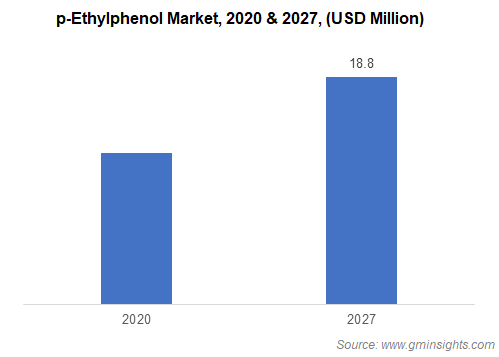 It is produced by two major sources including animals and bacteria. Its adoption in healthcare and chemical synthesis for offering greater effectiveness and more natural results may further support market trends.

Besides, significant increase in the proportion of the elderly population in the U.S. and European countries, along with increased susceptibility of various diseases is anticipated to boost the product demand for pharmaceutical sector.

Rising demand for natural and organically derived food and beverage additives has focused on the use of p-ethylphenol as an agent to enrich the food material in the coloring, flavoring, spicing, and other enrichment aspects. As the consumer preferences in regards with baked foods, fresh beverages, and sweet products will impart in increased growth of this market. The changing lifestyle and purchase power of the end-users enable the manufacturers to use more of such rich and natural base ingredients which will contribute to the upscaled industry expansion.

Asia Pacific industry growth is attributed to strong demand in cosmetics, food and beverage industries and steady demand for the use of organic ingredients 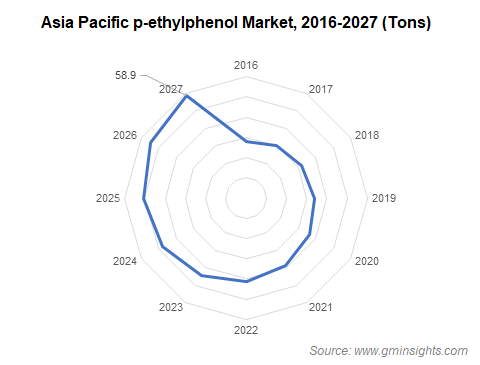 Asia Pacific p-ethylphenol market is anticipated to grow at a considerable rate of over 7% from 2021 to 2027. Substantial product demand for pharmaceutical applications across the region will primarily contribute to industry expansion. The region is characterized by changing lifestyles, rapid industrialization & urbanization, growing middle-class population, and increasing spending on healthcare, nutrition, cosmetics, and wellness products. Besides, rising consumer awareness regarding the nutritional deficiency and demand for enriched and naturally derives food will further boost the regional industry landscape.

Several suppliers are headquartered in China and are vertically integrated in nature, allowing them to manufacture the product, thereby reducing costs, preventing supply disruptions, and increasing competitiveness. Factors such as easy availability of raw materials, cheaper labor availability, and relatively less stringent environmental regulations in the region have led to increased FDI and urged several leading manufacturers to set up a manufacturing plant in the region.

Countries such as India, China, and South Korea have large production units of pharmaceuticals intermediates and are expected to promote the demand for APIs prepared from p-ethylphenol compounds in coming years.

In December 2020, Merck, the parent company of Sigma Aldrich announced a total investment of USD 48.69 million at its production facilities in the U.S. This initiative is aimed at broadening the company’s manufacturing footprint and share in overall market.

In September 2020, Biosynth Carbosynth expanded its synthesis capability by opening new laboratories in the U.K. This initiative is aimed at increasing the company’s capacity to synthesize complex molecules and fine chemicals and hence serve its customers more efficiently.

The p-ethylphenol market research report includes in-depth coverage of the industry, with estimates & forecast in terms of volume in Tons and revenue in USD Thousand from 2016 to 2027, for the following segments:

Global market for p-Ethylphenol went past $95 million in 2020 and is projected to showcase more than 6.6% CAGR during the forecast period of 2021-2027.
Pharmaceutical intermediate applications are anticipated to exceed $18.5 million in the global p-Ethylphenol market by 2027 as the chemical compound has aromatic properties, which can be used in cosmetics, skincare, and food items.
Asia Pacific p-ethylphenol market size is projected to showcase more than 7% CAGR through 2027 as the chemical compound is being widely used to manufacture pharmaceutical products.
Prominent organizations, including Thermo Fisher Scientific, Sigma Aldrich, Santa Cruz Biotech, TCI Chemicals, Clearsynth, and AK Scientific, among several others, are contributing to the growth of the global p-Ethylphenol industry share.
Customize this Report
Inquiry Before Buying