Middle East Ammonia Market size exceeded USD 6.5 billion in 2021 and is estimated to grow at over 3.5% CAGR from 2022 to 2028. Large production capacity along with increasing usage as a refrigerant will positively drive the market growth. 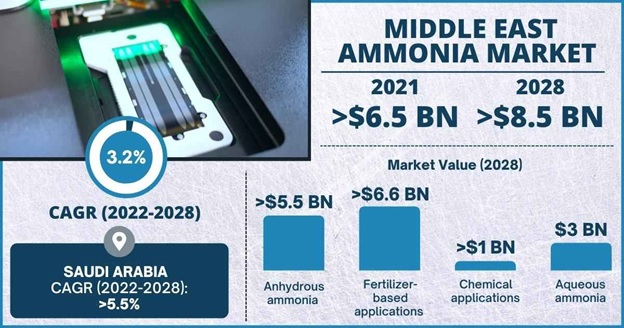 Positive application outlook in industries such as refrigeration, fertilizer, pharmaceuticals, chemicals, and water purification are propelling the ammonia market growth in the Middle East region. The Middle East displays great potential for processed meat & dairy products and holds a major share in the global trade. Advancements in cold chain facilities for food & raw material storage & distribution will promote the ammonia demand as a refrigerant. The increased export & trade of meat & fish through cold chains has also facilitated the market expansion.

However, fluctuations in natural gas production is among the key factors resulting in price variations for the end-product. Furthermore, the COVID-19 pandemic had a limited impact on the ammonia market as the key application industries such as fertilizers were not affected at a major level in the region.

Ammonia is one of the base ingredients of dyes and has witnessed growth in demand in manufacturing industries, supporting the business advancement. The use of ammonia in the expanding textile and other chemical markets has increased significantly, strengthening the product demand. Moreover, the curing effects of the product in preventing & treating fainting & dizziness provide a growing market in the pharmaceutical sector thus driving the industry outlook. 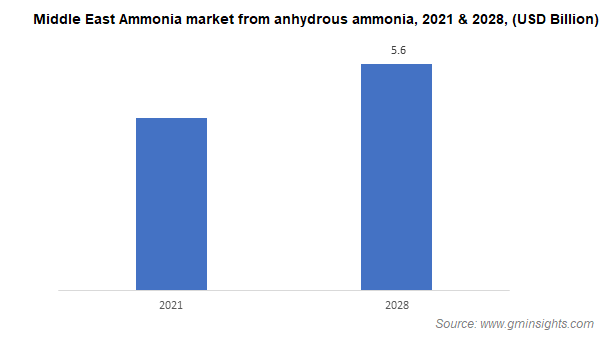 Middle East Ammonia market from anhydrous ammonia type segment is expected to surpass USD 5.5 billion by 2028. It is a colorless non-flammable liquified gas and is a pure form of ammonia with no water content. It is manufactured through the haber-bosch process that combines hydrogen and nitrogen by using pressurized and heated catalysts.

It is the most efficient and widely used source of nitrogen fertilizer for crops such as wheat and corn. Increasing usage of anhydrous ammonia owing to its medicinal and cleaning properties along with cost-effectiveness will promote product demand over the forecast timeframe.

Anhydrous ammonia is widely used to manufacture chemical fertilizers including ammonium phosphate, urea, and ammonium nitrate. Rising inclination toward cleaning and sanitation due to increased well-being and health awareness amidst pandemic has boosted the demand for household & industrial cleaners, which in turn accelerates the market statistics. 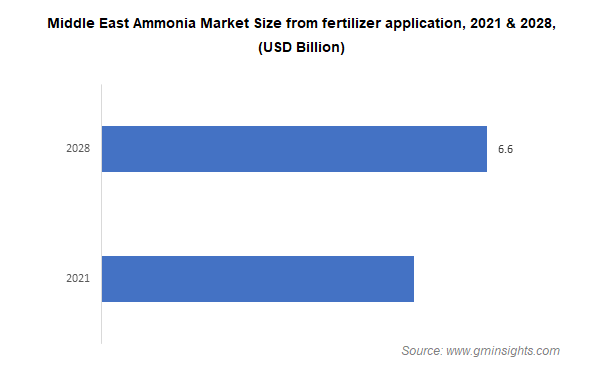 Middle East Ammonia market from fertilizer-based applications is likely to cross USD 6.6 billion by 2028. The growing focus of the agricultural sector on fertilizers and their variants to enrich the soil for attaining a better crop quality will add to the market growth. The use of fertilizers is essential & increasing in the diverse climatic conditions faced by farmers and agronomists, thereby providing a boost to the overall market demand.

Several initiatives are taken by the governments to promote awareness regarding the use of fertilizers and their positive impact on crops is accelerating the product demand. Furthermore, a limited arable area in the region and less nutrient content in the soil due to the high use of pesticides and other chemicals are expected to augment product adoption. 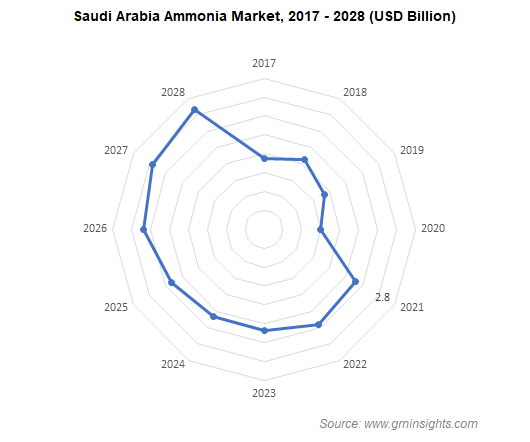 Saudi Arabia ammonia market exceeded USD 2.8 billion in 2021 and is anticipated to grow at over 5.5% CAGR from 2022 to 2028. The demand for fertilizers is led by the need for high crop production from limited arable land, which will boost ammonia production, thus propelling the business landscape.

Further, ammonia market growth in the country is anticipated to the shortage of water, and less rainfall in that boosted demand for fertilizers to increase agricultural crop production. Saudi Arabia is one of the prominent exporters of ammonia and its derivatives. The country exports a significant share of its production to Brazil and Asian countries, providing it a strong position in the global ammonia exporter’s list.

New product development along with acquisition, and expansion is among the primary business strategies adopted by manufacturers

In September 2021, Enova provided Yara International ASA around USD 30 Million for the initiative of producing green ammonia. With this Yara officially takes the first step toward full decarbonization of the ammonia plant at Herøya in Porsgrunn.

In February 2022, Ma’aden that has completed the construction and pre-commissioning activities of the third ammonia plant, part of the phosphate 3 projects to enhance its market share.

The Middle East Ammonia market research report includes in-depth coverage of the industry with estimates & forecasts in terms of volume in Kilo Tons and revenue in USD Million from 2017 to 2028 for the following segments:

Middle East ammonia market value surpassed USD 6.5 billion in 2021 and is set to expand at a CAGR of 3.5% between 2022 and 2028 owing to the rising product usage as a refrigerant.
Middle East ammonia market size from anhydrous ammonia type is estimated to exceed USD 5.5 billion until 2028 considering the surging product adoption on account of cleaning and medicinal properties.
Saudi Arabia ammonia market revenue is poised to grow at a CAGR of 5.5% from 2022 to 2028 driven by the escalating need for high crop production from limited arable land.
Prominent players in the Middle East ammonia industry comprise SABIC, OCI N.V., Qatar Fertiliser Company, Petrochemical Industries Company, Hemmat Petrochemical Company, Yara International ASA, and others.
Customize this Report
Inquiry Before Buying