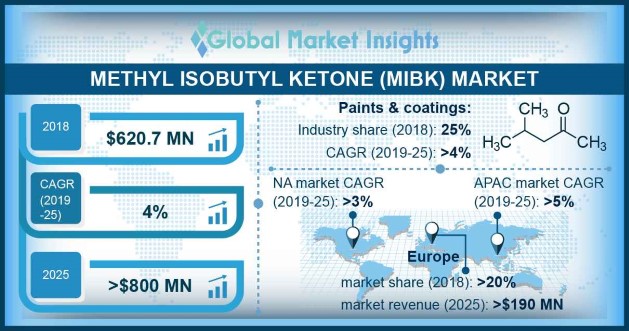 Thriving global automotive sector has increased the demand for solvents in rubber processing and surface coatings chemicals, that has pushed the product demand in the industry. Similarly, rising expenditure on construction industry has increased the use of methyl isobutyl ketone (MIBK) in form of solvents and extraction solvents for paints & coatings. Moreover, its growing demand in marine and pharmaceutical industries will boost the market, leaving an optimistic impact on the product market during the projected timeframe. Additionally, the product is widely used in production of insecticides, that are commonly used in commercial agriculture sector on a massive scale. This is fueling the agriculture driven economies such as India, that are spending heavily in improving their agricultural production output by focusing on insecticides and fertilizers, which in turn, will positively influence the methyl isobutyl ketone market growth in the forecast period.

Methyl isobutyl ketone, being organic, is widely used in the production of agrochemicals and cosmetics products, that has nurtured its utilization across the globe. Furthermore, the product is one of the remarkable solvents for resin gums, paints, varnishes, etc. It is extensively treated as a denaturant in various ethanol formulations & extractive agent in de-oiling and de-waxing of rubber products. Moreover, synthetic MIBK exposure can have severe impact on the ecosystem which will trigger the rising demand for bio-based MIBK globally; that costs less in comparison to other petroleum-based method for its processing method. In addition, petroleum based MIBK are explosive peroxides in nature when exposed to air, which could be hazardous just in case of spillage during storage, handling and transport. Hence, use of bio based MIBK will be economically and ecologically viable option for a number of industries and is likely to fuel the methyl isobutyl ketone market demand across the globe during the expected timeframe.

Many regulatory bodies around the globe are imposing stringent regulations and guidelines on the production of MIBK due to its high toxicity level. Although, on the other hand its negative impacts on the environment and human health has led to an increased implementation for bio-based methyl isobutyl ketone. The bio-based MIBK is expected to substitute the synthetic-based MIBK for numerous major applications to provide lucrative growth opportunities for major companies and will swell the product industry size by 2025.

Based on application type, the methyl isobutyl ketone market is segmented by solvents, extraction solvents, rubber processing chemicals, surfactants and other applications such as denaturant, insecticides etc. MIBK has wide-ranging application as a solvent in industries that produce machineries, rubber products, paints & chemicals. Owing to the low solubility in water MIBK is suitable for liquid-liquid extraction. The segment is likely to hold a major share in the future and accounted over 60% market share in 2018. Furthermore, growing automotive and construction sector in developing economies will certainly encourage the market demand in the near future.

The methyl isobutyl ketone market is further segmented considering the end-use industry industries, i.e. paints & coatings, pharmaceuticals, automotive, rubber, agrochemicals and some other end-use industries. The others segment consists of marine, building & construction etc. Paints & coatings industry is anticipated to grow with the CAGR of over 4% for the forecast period owing to the product demand. The industry held a share close to 25% in the market in 2018 and is expected to grow at moderate rate in the projected timespan.

Asia Pacific proved to be the fastest growing region in the methyl isobutyl ketone market and will continue to grow with the maximum CAGR over 5% in the expected timespan. This is due to increasing industrialization and construction activities in the region. Besides, the region also possesses high product demand form the other end-use industries such as agrochemicals, automobiles, rubber, etc. The demand for methyl isobutyl ketone is predicted to rise in the emerging economies of the region namely China, Korea and India due to growing production and sales of automotive products. This is mainly due to easy accessibility of raw materials and minimum labor cost to fulfil the product demand in various applications, that will enhance the regional market share in the coming years.

North America holds a fair share in the MIBK market and is considered to behold a firm growth due to the growing usage in the pharmaceutical sector. The segment is said to grow with a significant rate of over 3% in the projected timeframe.

The companies in this industry are adopting aggressive product pricing strategies in order to overcome escalating raw material prices and severe competition. For instance, in May 2018, Arkema Group announced price increase of the oxygenated solvent products, which is due to increasing raw materials price of the product.

Methyl isobutyl ketone market size is expected to witness a very high growth in the near future due to the wide applications from diverse end-use industrial operations worldwide. Increasing automotive and construction activities, especially in emerging economies, will boost the product demand for various applications such as rubber processing chemicals, surfactants in addition to solvent based applications which will further fuel the product demand. In addition to this, the product is also widely used as denaturant and insecticides by agriculture driven economies, that will augment the global market size by 2025.