Medical Marijuana Market size surpassed USD 22.4 billion in 2020 and is estimated to register over 19.3% CAGR between 2021 and 2027. The increasing awareness among patients as well as healthcare professionals regarding the benefits of medical marijuana has compelled the regulatory authorities to consider and legalize medical cannabis. Over 30 countries have legalized its medical use through various national programs. Several states in the U.S. have also approved its medical use. However, the drug remains to be identified as illegal at the federal level, irrespective of medical or recreational use, which places it in The Controlled Substance Act of 1970, Schedule I in the U.S. As several research and development initiatives studying the medical use of marijuana are noted across countries, a dynamic legislative scenario is expected during the forecast period. 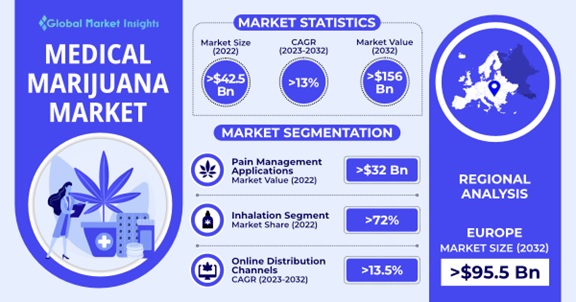 Medical marijuana, also known as MMJ or medical cannabis, is the marijuana plant and derived products used for the treatment of several illnesses and conditions such as chronic pain and nausea, among others. It is used for various medical purposes such as pain management, epilepsy among others. Various efforts are underway to legalize the use of medical marijuana across major markets in Asia Pacific and Middle East region.

The COVID-19 pandemic has led to increasing usage of medical cannabis across several states of the U.S. and Canada. There was a significant upsurge in the number of medical marijuana patients and prescriptions across the U.S. and Europe during the COVID-19 pandemic. However, with the approval of recreational or adult-use of cannabis in major U.S. states such as California, Colorado, Washington among others, the industry witnessed a downfall due to ease of availability of recreational cannabis. This may slow down the growth of market during the forecast timeline.

Development of medical marijuana as an alternative for traditional medicine

Medical marijuana continues to remain widely researched and debated for several decades. The proven medical benefits of specific marijuana-based formulations have led to the commercial approval of multiple medications from The U.S. Food and Drug Administration (FDA). The rising prevalence of cancer has led to an increasing number of patients undergoing chemotherapy and largely experiencing nauseatic conditions. These are studied to be nullified with the help of THC-based medications. THC-based medications are also noted to act as appetite stimulators in cases with wasting syndrome caused owing to AIDS. Further, several THC and CBD-based medications are approved or are undergoing clinical trials for the treatment of neuropathic pain and muscle spasms. As medical marijuana is noted to act as an alternative medicine to its traditional counterparts, an increasing prevalence of illnesses is fuelling the market growth.

Regulatory framework to cause hurdles in the medical marijuana market expansion

While several national regulatory bodies have legalized the use of recreational and medical marijuana in respective countries, numerous countries have neglected its legal consumption. This leads to an unfulfilled demand for cannabis from the illegal, or black market, thereby hampering the country’s economy. This move also limits the global market potential. Additionally, stringent regulations and strict quality standards pose a threat to the market value.

Pain management to dominate the market size in the coming years 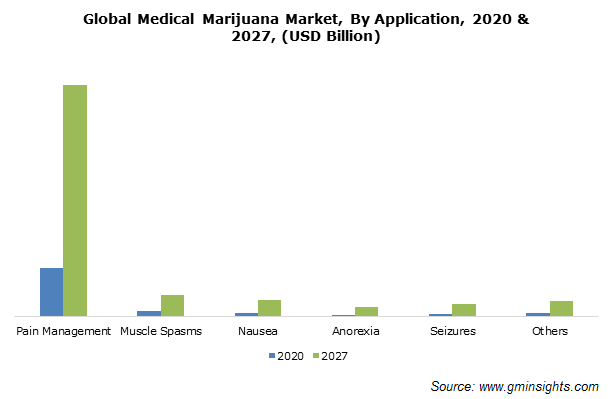 The pain management segment accounted for nearly three-quarters of the market proportion in 2020. Rapid adoption of medical cannabis for pain management applications is noted and is anticipated to expand at a relatively higher pace. As cannabinoids have shown higher potential in pain relieving experiments than opioids, these are showcasing an upsurge for chronic pain treatment. Medical cannabis is also noted to replace opioids for the pain management applications owing to numerous side effects of opioids. As per the findings of the Centre for Disease Control and Prevention (CDC), nearly 20.4% of U.S. adults suffered from chronic pain. The increasing prevalence of chronic pain primarily creates a vast demand for medical marijuana, hence boosting the market revenue. 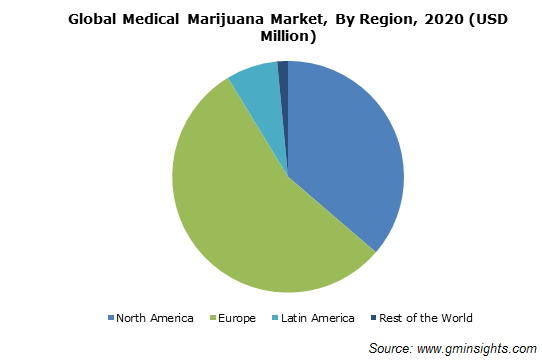 North America medical marijuana market size was over USD 8.1 billion in 2020. Legalization of medical cannabis has created a domino effect across states and a rapid spur is observed to approve and initiate the commercialization of MMJ in U.S. Canada is also noted to remain a highly lucrative market observing an exponential growth led by a wide population opting for medical cannabis as a treatment alternative. The rising prevalence of illnesses such as Alzheimer’s as well as Crohn’s disease have also propelled the sales of medical marijuana in the region. Furthermore, several dispensary chains are considered participate in the distribution of medical marijuana across states to enable uninterrupted availability, leading to an adequate supply of medical marijuana and impelling the demand. Similar trend is slated over the forecast period and the North America industry is anticipated to register significant growth rate during the forecast timeframe.

The medical marijuana market research report includes in-depth coverage of the industry with estimates & forecast in terms of revenue in USD from 2016 to 2027, for the following segments:

The global medical marijuana market recorded a valuation of over USD 22.4 billion in 2020 and will expand at a CAGR of 19.3% over 2021-2027.
The pain management segment held a dominating share of around 75% in 2020 and will grow owing to the higher potential of cannabinoids in providing pain relief as compared to opioids.
The legalization of medical cannabis and the rising incidences of diseases such as Crohn’s and Alzheimer’s will drive North America medical marijuana market share, which was valued at over USD 8.1 billion in 2020.
The hospitals segment accounted for USD 13 billion of the overall market revenue in 2020 and will grow due to the upsurge in government policies that favor the execution of medical marijuana programs.