U.S. Medical Marijuana Market size exceeded USD 7.2 billion in 2020 and is estimated to expand at a CAGR of 10.5% between 2021 and 2027. A significant contribution to the rapid growth witnessed by the market is the large-scale awareness surrounding the treatment of chronic diseases. The increasing awareness is primarily compelling the regulatory authorities to legalize medicinal use of marijuana. As of 2020, 34 states in the U.S. have approved and commercialised the sales of medical marijuana. However, use of cannabis is still identified as illegal at a federal level, limiting the overall market potential. However, a rise in R&D activities has led to the increasing market penetration of medical cannabis for various medical conditions including cancer, neurology, HIV/AIDS, muscle spasms, among others. 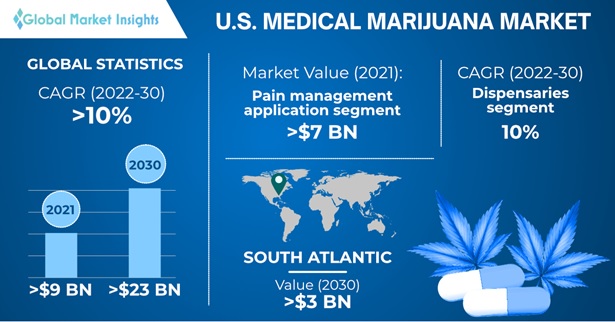 Medical marijuana is the marijuana plant and its downstream products used for the treatment of several medical conditions. It is used to treat conditions such as nausea and pain management among others. Several states where the medicinal use of cannabis is considered illegal are noted to make the shift and decriminalize possession as well as cultivation. This represents an optimistic scenario for the market in the coming years.

The economic impact of COVID-19 pandemic on the U.S. medical marijuana market is observed to be optimistic across the country. A significant spike in the number of patients as well as prescription across states in U.S. has caused an upsurge in the market. However, as the legalization and commercialization of recreational cannabis gain momentum, states such as Colorado, California and Washington among others have showcased a sluggish performance of the industry. This is anticipated to create hurdles in the market growth over the coming years.

Significant research activities in the initial years of commercialization have transformed the pain management segment into a highly mature segment of the market. This allows room for research activities to study the effectiveness of marijuana in other medical disorders. The approach is noted to be fruitful in the industry as several other applications such as HIV/AIDS, anxiety, among others have been considered and qualified by several states. Additionally, several government grants and funds are also allocated to explore additional uses of cannabis plants for medicinal purposes. Support from various government and non-government organizations for R&D activities of cannabis will be conducive to the market expansion.

The growing interest in medical marijuana has led to its increasing use in treating medical conditions and related symptoms such as pain, depression, anxiety, multiple sclerosis, insomnia, arthritis, PTSD, nausea, among others. The qualifying conditions for medical marijuana vary across states in the U.S. In some cases, states such as California, Oklahoma and District of Columbia, among others, allow physician’s discretion when prescribing medical marijuana. However, on the other hand, several states allow prescriptions only for a limited set of qualifying conditions. As the drug is identified as illegal at a federal level, possessing medical marijuana while travelling across states is also considered illegal. Further, with several states yet to legalize its consumption, a proportion of the demand for cannabis in these states is poised to be fulfilled by the illegal means, or black market. This hampers the market, in particular, while also impacting the country’s economy to a certain extent. Cumulatively, these factors represent some of the grey areas of the industry, potentially slowing down the market value.

Pain management remains the dominant segment during the forecast timeframe 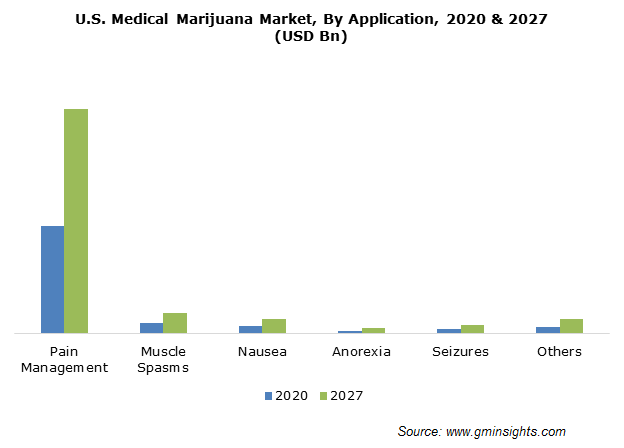 The pain management segment in the U.S. medical marijuana market will capture more than 75% of the market share by 2027. The increasing prevalence of pain in U.S. is primarily contributing to the country’s growing demand for medical marijuana. According to the Centres for Disease Control and Prevention, the prevalence of chronic pain in U.S. is 20.4% of U.S. adults while the prevalence of high-impact chronic pain is 7.4% of U.S. adults. The rising prominence of medical cannabis as an alternative to traditional medicine is noted to significantly contribute towards the segment growth.

The inhalation segment accounted for over USD 5.3 billion in 2020. A controlled dose can be delivered via the inhalation route of administration, making it one of the preferred options. Patients preferring inhalation are noted to experience a faster relief as over 50% THC is delivered to the lungs. 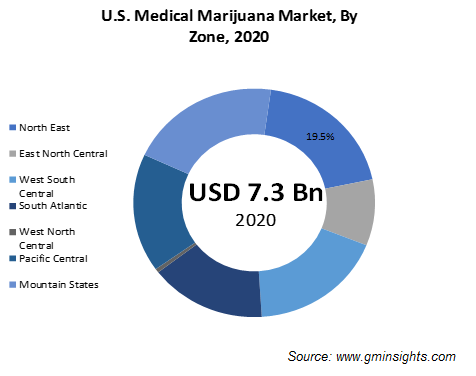 North East zone in the U.S. medical marijuana market is slated to expand at a CAGR of 13.6% through 207. Over 9 states in the North East have legalized the medicinal application of marijuana with Pennsylvania leading the revenue contribution in the region. With a relatively higher price of medical marijuana in the region owing to regulatory implications, the North East zone is anticipated to gradually expand over the forecast period.

The U.S. medical marijuana market research report includes an in-depth coverage of the industry with estimates & forecast in terms of revenue in USD from 2016 to 2027, for the following segments:

The above information is provided for the following zones and states: