Maritime Patrol Aircraft Market size exceeded USD 5 billion in 2019 and is anticipated to grow at a CAGR of over 3% between 2020 and 2026. The market growth is attributed to the rapid requirement to increase maritime surveillance activities in response to geopolitical conflicts. 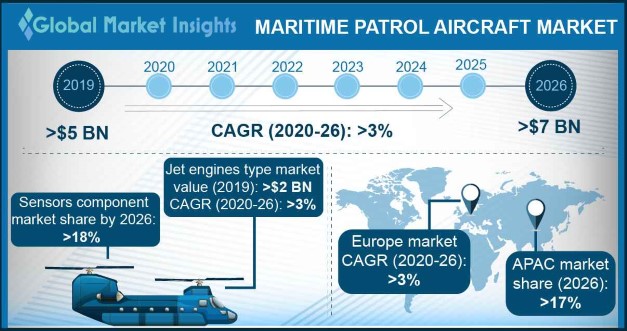 Presence of major aircraft manufacturers, such as Airbus, Boeing, and Lockheed Martin, along with significant intervention of government and defense bodies while undergoing contracts will regularize market dynamics. The companies in collaborations with government bodies and research centers are extensively investing in R&D activities of peripheral components, such as sensors and cameras, to increase efficiency of maritime surveillance systems.

The maritime patrol aircraft market witnessed a moderate impact of the COVID-19 pandemic due to the temporary shutdown of various military & defense projects in mid-2020. Several government administrations have passed regulations to suspend the production activities related to defense equipment manufacturing to minimize the spread of the coronavirus pandemic. This has delayed developments in the ongoing projects, hampering the market. However, surging requirements for emergency medical services and rescue & airlifting operations for COVID-19 patients in the coastal areas and neighboring nations have created a high demand for maritime patrolling aircraft. Adding to this, the stringent restrictions imposed on the international transportation of goods and unwanted trade activities are expected to increase the demand for maritime patrol aircraft during the COVID-19 pandemic.

The North America camera segment accounted for more than USD 300 million in 2019 and showcase growth rate of more than 2% through 2026 led by ongoing technological advancements in cameras, allowing them to capture high resolution images in various environmental conditions.

The Asia Pacific Jet engine segment in the maritime patrol aircraft market is predicted to expand at a CAGR of 5% by 2026. The rise in geopolitical tension and missile testing activities in China, India, Pakistan, North Korea, and South Korea have accelerated the acquisition of surveillance aircraft. There has been a significant rise in cross border conflicts, which has given rise to unwanted naval threats and terrorist activities. Efforts of some countries to establish global and regional dominance are creating tension within the environment, augmenting the market opportunities.

Various countries are increasing their pace of defense acquisition to safeguard their borders from neighboring countries. For instance, in March 2020, South Korea finalized the order of six Boeing P-8 maritime patrol and reconnaissance jets, which will be delivered by 2022. The acquisition was in response to aggressive missile testing activities carried out by North Korea.

The Europe fixed wing aircraft segment was valued at USD 1 billion in 2019 and is estimated to attain a CAGR of 3% through 2026. Rising efforts of Europe to convert existing fixed wing commercial aircraft into maritime surveillance aircraft by providing required upgrades will support the industry growth.

The Asia Pacific maritime patrol aircraft market will capture over 17% of revenue share by 2026 on account of the increasing acquisition of surveillance aircraft along with rising efforts of regional governments to improve their aircraft manufacturing capabilities. For instance, in December 2019, China initiated mass production of special mission aircraft including early warning aircraft, anti-submarine aircraft, electronic warfare aircraft, surveillance aircraft, and a range of warplanes. Once the manufacturing capabilities are achieved, China plans to establish a full information system to increase self-reliance.

The market research report on maritime surveillance aircraft includes in-depth coverage of the industry with estimates & forecast in terms of revenue in USD from 2015 to 2026 for the following segments:

The market size of maritime patrol aircraft was exceeded USD 5 billion in 2019.
The industry share of maritime patrol aircraft is poised to grow at a CAGR of over 3% between 2020 and 2026.
The Asia Pacific market will account for more than 17% revenue share by 2026 driven by increasing acquisition of surveillance aircraft coupled with increasing efforts of regional governments to improve their aircraft manufacturing capabilities.
According to the analysts at GMI, the camera component segment in the North America market valued at USD 300 million in 2019 and is predicted to witness growth rate of more than 2% through 2026.
The industry will experience a moderate upsurge in 2020 due to coronavirus (COVID-19) pandemic. Sudden growth in requirement of emergency and medical services in coastal regions and friendly neighbors along with requirement of maritime surveillance to limit unwanted trade activities will create opportunities for the market expansion.
Major industry players are Airbus S.A.S, Boeing, Lockheed Martin Corporation, Saab AB, BAE Systems plc., Leonardo S.p.A, Thales Group, Kawasaki Heavy Industries, Ltd, Dassault Aviation, and Textron Inc.
Customize this Report
Inquiry Before Buying