Lung Stent Market size exceeded USD 134 million in 2019 and is projected to grow at over 14.6% CAGR between 2020 and 2026. The rising prevalence of lung cancer and chronic obstructive pulmonary disease across the globe is propelling the market growth.

Growing adoption of endoscopic therapy and rising preference for minimally invasive surgeries are some of the major factors uplifting the market revenue. Increasing investments on research and development by public and private organizations is leading to development of novel non-vascular stents, thereby fueling the adoption for airway stenting. Additionally, increasing funding on healthcare infrastructure is leading to development of well equipped, well-furnished, and advanced healthcare facilities that is further fostering the market value. 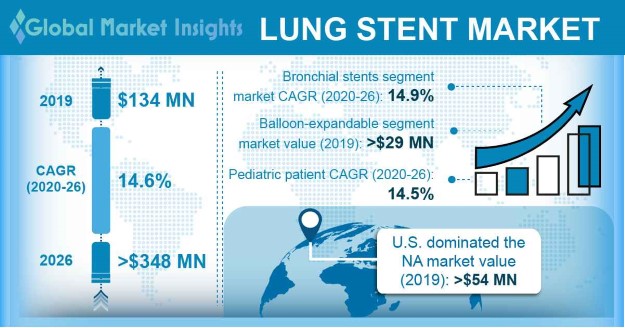 The ongoing COVID-19 pandemic is an unprecedented public health concern and has a minimal impact on the lung stent market. Healthcare professionals across the globe have postponed the minimally invasive surgeries to decline the risk of patients being exposed to COVID-19 in hospital, thereby supporting the hospitals in converting operating theatres into intensive care units.

Several adverse events post the deployment of self-expandable metallic stents for benign airway disease have been reported. Thus, regulatory authorities are engaged in regulation of metallic lung stent in order to ensure patient safety and high level of care. The Food and Drug Administration (FDA) has published advisory on the usage of metallic stents in patients suffering from benign airway disease. Moreover, the physicians performing airway stenting must report all adverse device events to the FDA. Furthermore, the European Association of Bronchology and Interventional Pulmonology (EABIP) has established high standards in diagnostic and therapeutic research in interventional pulmonology including bronchoscopy & thoracoscopy as well as in clinical practice. In addition, rising emphasis of market leaders on new product development and product upgradation will influence the industry expansion.

The increasing incidences of lung cancer have led to an increasing adoption of minimally invasive surgeries to circumvent pain. Patients with congenital cystic adenomatoid malformations causing difficulty in breathing prefer undergoing stent placement. Therefore, the utilization of airway stents is significantly increasing and as a result, the demand for lung stent is expanding. Moreover, placement of lung stent is cost-effective as compared to conventional procedures and has reduced risk of complications.

Growing demand for tracheal stents will spur the market revenue

Tracheal stents segment valued at more than USD 93 million in 2019 owing to high adoption of tracheal stents for the treatment of respiratory disorders and among patients suffering from stenosis on account of tracheal cancer. Furthermore, accidental trauma or tracheostomy can lead to difficulty in breathing that will in turn lead to an increased need for tracheal stenting.

Growing preference for silicone stent will boost the market expansion

Silicone segment size was around USD 73 million in 2019 led by easy repositioning and removability, greater firmness, high mechanical strength, and greater flexibility of silicone stents. Additionally, these stents are cost-effective, well-tolerated, and have the enough firmness to resist extrinsic compression. Therefore, the adoption of these stents is significantly increasing. Moreover, silicone stents can be easily customized as per the airway anatomy of the patient prior to insertion. Silicone stents are widely accepted for the bronchoscopic management in post-tuberculosis tracheobronchial stenosis. 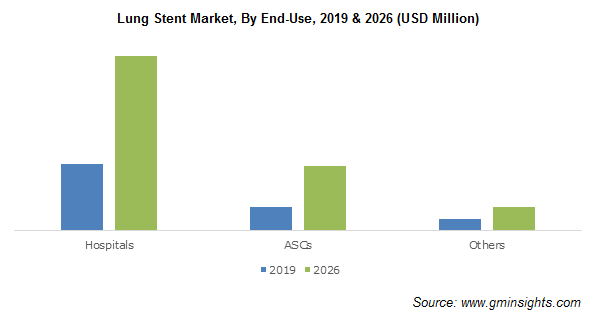 Hospital segment revenue in 2019 was USD 88 million on account of the high inflow and admission of patients suffering from chronic disorders. The number of admissions of patients in hospitals has increased due to the availability of large number of skilled medical professionals in hospitals. Favorable reimbursement scenario pertaining to procedures of breathing conditions in hospitals is resulting in an increased inflow of patients. Increasing number of public hospitals to provide cost-effective treatment to patients has also increased adoption of airway stenting in hospitals.

Adult segment held majority market share in 2019 and crossed USD 88 million revenue. The majority share of the segment is owing to increasing prevalence of chronic obstructive pulmonary disease (COPD) among adult population. According to a published report, in 2020, approximately, 14.8 million adults have been diagnosed with COPD in the U.S. Thus, the growing number of geriatric population suffering from respiratory disorder associated with COPD is significantly leading to an upsurge in demand for lung stent. Moreover, prevalence of lung disorders and post-tuberculosis stenosis among adult population results in an increasing demand for lung stenting. 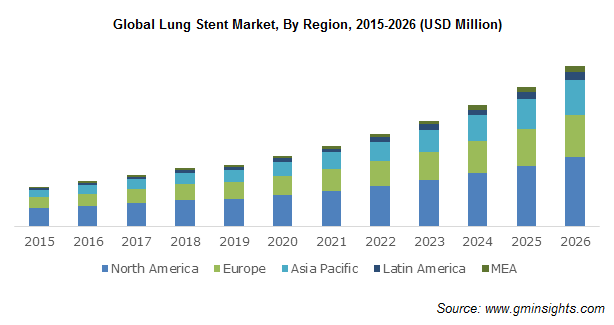 U.S. dominated the North America lung stent market and was valued at more than USD 54 million in 2019 impelled by high number of patients suffering from respiratory disorders. According to a published report, in 2020, by Office of Disease Prevention and Health Promotion (ODPHP), approximately, 14.8 million adults have been diagnosed with COPD and over 25 million people have asthma. Therefore, due to increasing prevalence of respiratory disorders there is a consistent demand for airway stenting in the country. Furthermore, the number of people undergoing bronchoscopy in the country is increasing, leading to augmented demand for bronchial stent. Presence of strong market players engaged in development and launch of novel and innovative lung stent is further fueling the market demand.

Germany accounted for largest revenue across the European region and was estimated at USD 6 million in 2019. The high revenue share in the country is attributed to the fully integrated network of public and private hospitals, growing geriatric population and increasing prevalence of respiratory diseases. Rising healthcare expenditure and higher preference among surgeons has resulted in increasing adoption of these stents across the region.

Some of the major players operating in the market are Boston Scientific Corporation, Hood laboratories, Micro-Tech (Nanjing) Co., Ltd., Novatech SA, Boston Medical Products, Inc., Merit Medical Systems, Inc., Cook Group, EFER ENDSCOPY and Stening SRL among others. These major industry players are engaged in making investments in the market that enables these players to garner maximum revenue share. These industry players are focusing on strategic mergers, acquisitions, and collaborations to launch new products to expand their geographical presence and product portfolio.

The lung stent market research report includes an in-depth coverage of the industry with estimates & forecast in terms of revenue in USD from 2015 to 2026, for the following segments:

The global industry size of lung stent surpassed USD 134 million in 2019 and is poised to grow at more than 14.6% CAGR through 2026.
In 2019, the self-expandable lung stent segment share exceeded USD 104 million and could witness a substantial growth owing to its broad usage in malignant airway obstruction treatment due to ease of insertion.
Silicon segment share was registered at nearly USD 73 million in 2019, driven by benefits like easy repositioning and removability, high mechanical strength, greater firmness, and greater flexibility.
The adult segment size exceeded USD 88 million in 2019, led by the increasing cases of chronic obstructive pulmonary disease (COPD) among the adult population.
The U.S. contributed over USD 54 million towards the market in 2019 owing to significant number of respiratory disorder patients and increasing preference for undergoing bronchoscopy.
Customize this Report
Inquiry Before Buying