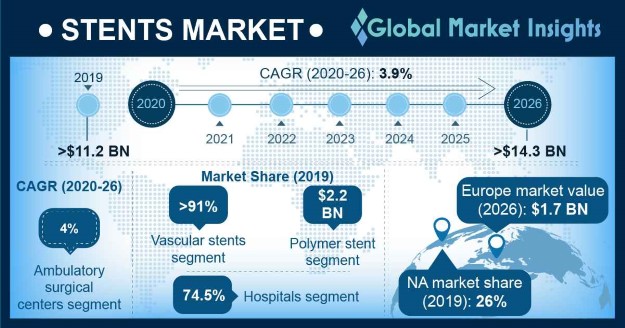 Stents are essential medical devices, used in critical life-saving procedures. Thus, it can be expected that the COVID-19 crisis will not directly impact the manufacturing of such devices. However, logistical disruptions can be expected especially due to the reliance on Chinese manufacturing. This could disrupt the supply of stents and cause temporary shortages, potentially increasing the prices of stents.

Stringent regulation approvals may slow down the market expansion

Strict regulatory landscape may act as a barrier in growth of the stents market. Various governments and organizations dictate guidelines and rules for safer and effective employment of stents. For instance, the European Association of Percutaneous Cardiovascular Interventions (EAPCI) provides clinical and non-clinical guidelines for stents. Also, the U.S. FDA performs extensive systemic review of literature and pre-clinical trials in animals before granting approval for stents. Moreover, Office of Combination Products (OCP) have also published regulations for the use of drug eluting stents by surgeons and physicians. These stringent rules for employment of stents will significantly hinder the industry growth.

The vascular stents market accounted for revenue share of over 91% in 2019 owing to growing burden of cardiovascular disease (CVD). For instance, according to the American Heart Association (AHA) report, the CVD prevalence was high in the U.S., Central Europe, North Africa and in Middle East in 2018. The report also stated that, nearly 30.3 million U.S. adults were diagnosed with cardiovascular disease in 2018. Thus, rising prevalence of disease burden in various regions coupled with increasing usage of vascular stents in such disease treatment solution and procedures will upsurge the segment growth. Furthermore, vascular stents are used in opening narrowed blood vessels and clearing blockages.

The metal stents segment value was around USD 9.1 billion in 2019. Metal is the material of choice for stents due to advantages such as lower rates of stent fracture, flexibility, and biocompatibility. Integration of metallic stents with biodegradable polymers to overcome the limitations of conventional will be another factor propelling the segment growth. Furthermore, metal stents reduce the incidence of abrupt vessel closure and restenosis compared with balloon angioplasty, thereby decreasing the rate of target lesion revascularization (TLR).

Hospital segment dominated a stent market share of 74.5% in 2019. Hospitals are well equipped with medical devices including stents, as they are essential devices and widely used in various minimally and surgical procedures. Changing lifestyle, adoption of unhealthy habits such as alcohol and smoking along with environmental factors including pollution adds in disease populations. Therefore, significant increase in hospital admissions will stimulate the demand for advanced treatment solutions offering immense growth opportunities for the market. Furthermore, availability of skilled healthcare professionals and the quality of post-operative care will supplement the segment growth. 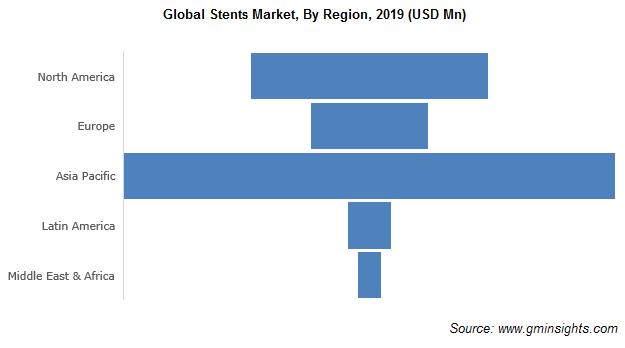 North America stents market held more than 26% revenue share in 2019 attributed to increasing incidence of cardiovascular disease coupled with rising geriatric population in the region. For instance, according to the Center for American Heart Association, cardiovascular disease (CVD) is listed as one of the leading causes of death, accounted for more than 800,000 deaths in the U.S. in 2018, that represents approximately 1 of every 3 deaths. Similarly, according to the U.S. Census Bureau, there were more than 54 million U.S. residents aged 65 years and older in 2019. This number involves various disease conditions and disorder such as coronary heart disease and angioplasty, among others. Thus, usage of stents in such disease condition or procedures will impel the North American market expansion.

The stents market research report includes an in-depth coverage of the industry with estimates & forecast in terms of revenue in USD from 2015 to 2026, for the following segments:

The market size for stents was more than USD 11.2 billion in 2019 and will expand at over 3.9% CAGR through 2026 owing to high reliability and accuracy level in the products available today.
The vascular stents held more than 91% of the overall market in terms of revenue during 2019 due to the rising prevalence of cardiovascular diseases (CVD) across the U.S., Europe and MEA regions.
The market share of metal stents had reached USD 9.1 billion in 2019 and will grow owing to advantages like flexibility, low stent fracture rates and integration with biocompatible polymers.
The balloon-expandable stents segment share was pegged at USD 7.2 billion in 2019 and will rise due to benefits like improved elasticity and long-term integrity.
North America industry accounted for over 26% of the global revenue share in 2019 with the growing prevalence of cardiovascular disease (CVD) and surging geriatric population.