Linear Low-Density Polyethylene Market size was above USD 37 billion in 2015 with gains at over 6% between 2016 and 2024. It has applications in various industries such as household products, packaging, automotive, and agriculture. Linear low-density polyethylene offers a wide spectrum of advantages than other polyethylene derivatives. 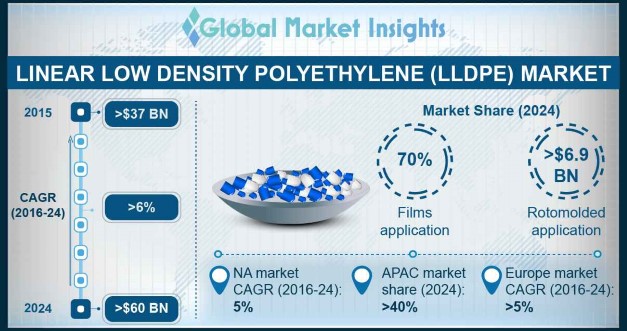 Linear low-density polyethylene is extensively used as films owing to its superior tensile properties. These films are used where elongation and flexibility are vital factors such as packaging industry, canal linings, miming, hazardous waste liners, and geo-membrane liners. LLDPE films are consumed widely in the food packaging sector as they are impact resistant and possess high tensile strength. Packed food & beverage consumption is increasing due to improved living standards of youth. Moreover, escalating adoption of ready-to-mix and ready-to-eat food packets has increased the linear low-density polyethylene market in the food packaging industry.

Linear low-density polyethylene films segment accounted for more than 70% of market share in 2015 and is anticipated to have a significant share during the forecast period. Increasing protective films demand in agriculture for UV ray’s protection and reducing soil erosion shall give a positive outlook to linear low-density polyethylene market growth. LLDPE films are also used as a moisture barrier in the construction sector under concrete structure. Further, increased usage of films in the food packaging industry has also contributed to the market. 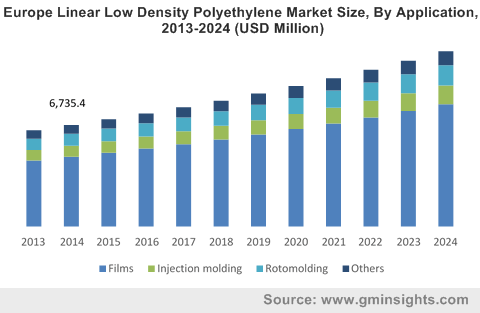 Another upcoming linear low density polyethylene application is rotomolding, it had a market size of more than USD 4.4 billion in 2015. Rotomolding process is used to manufacture hollow plastic articles without any pressure involved in its manufacturing. This technology is more economical than injection or blow molding as the molds do not have to sustain any pressure.

Rotomolding has a wide range of applications in construction, furniture, agriculture, automotive, water treatment, and packaging industries. Substantial growth in all these industries has led to increasing the linear low-density polyethylene market consumption in rotomolding applications.

Asia Pacific had registered a significant share of nearly 45% in 2015. Emerging economies’ construction spending is rising in this region. China and India had witnessed construction spending of around USD 1.75 trillion and USD 420 billion respectively in 2015, which is likely to boost the linear low-density polyethylene market revenue over the forecast period. Moreover, the growing packed food adoption in this region due to its ease of consumption has bolstered the product demand.

North America has an established packed food & beverage business, especially in the U.S. Also, it has a considerable potential for infrastructural development owing to the ever-increasing living standards of their population. North America contributes significantly to the automobile industry with automobile manufacturers such as “General Motors”. North America had a market size of above USD 7 billion in 2015 in linear low-density polyethylene market.

Europe had witnessed an increasing adoption of rotomolding technology owing to its developing telecommunication, electronics, and automobile industries. This industry flourishment has resulted in infrastructure growth in Spain, Italy, and Germany. Moreover, Germany is an automobile hub with automotive giants including “Volkswagen AG” and “ŠKODA AUTO a.s.”

Linear low-density polyethylene market report includes an in-depth coverage of the industry with estimates & forecast in terms of volume in kilotons & revenue in USD million from 2016 to 2024, for the following segments:

The forecast worth of linear low density polyethylene market is predicted to exceed 60 Billion (USD) by 2024.
According to credible reports, linear low density polyethylene market would record a crcr of 6% over the anticipated time span.
Linear low density polyethylene is used for making films for industries like the packaging sector where parameters like elongation and flexibility are of high significance.
Robust increase in the consumption of packed food & beverage products and escalating adoption of ready-to-eat food packets have driven the demand for LLDPE films in the food packaging industry.
Notable growth in the packed food & beverage sector of the U.S. and changing standard of living will fuel new growth proceeds in North America LLDPE market.
Companies like Nova Chemicals Corp., LyondeBassells Industries N.V., Reliance Industries, SABIC, CNPC, Exxon Mobil Corp., and Chevron Phillips Chemical Co. are some of the key manufacturers and suppliers of LLDPE.
Customize this Report
Inquiry Before Buying