Linear Alkylbenzene Sulfonate (LAS) Market size was more than USD 5 billion in 2015 and is likely to observe gains more than 5% CAGR over the forecast timespan. 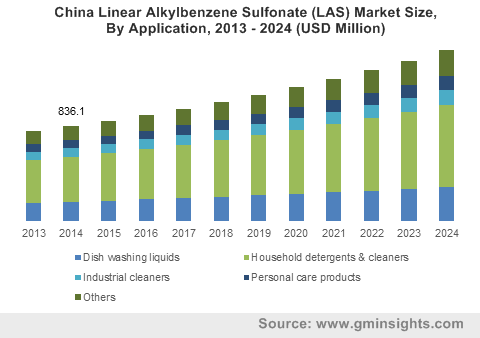 Global linear alkylbenzene sulfonate (LAS) market size is positively influenced by increasing product demand in household detergents. The overall household detergents demand in 2015 was roughly around 30 million tons and is projected to exceed 50 million tons over the projected timespan. The product is an anionic surfactant and is majorly used in detergents. It offers characteristics such as reducing the surface tension of water, which helps in removing stains from fabrics and textiles caused by oily & fatty soil. Upgrading consumer lifestyle dynamics accompanied with increasing disposable income has stimulated the demand for detergents in the recent years. This is turn will proliferate the global linear alkylbenzene sulfonate market share over the projected timeframe.

Dish washing liquids demand is substantially elevated in the past few years and is likely to expand at a promising growth rate by 2024, particularly due to high demand from food & beverage industry and residential application. Surfactants, thickening and stabilizing agents are widely used in dish washing liquids. Thus, linear alkylbenzene sulfonate market size will be significantly propelled by increasing demand for dish liquids demand across the globe. Furthermore, the product is also used in personal care products such as shampoo, shower gels and hair conditioners due to its emulsifying, foaming and cleansing properties. In addition, the cosmetic industry is likely to observe growth close to 4% over the forecast timespan on account of increasing consumer spending pattern along with awareness towards personal wellbeing will positively boost the overall linear alkylbenzene sulfonate market share in the coming years.

LAB (linear alkyl benzene), is the precursor of linear alkylbenzene sulfonate (LAS). Major raw materials used in manufacturing the product are kerosene and benzene. In addition, kerosene, a petrochemical derivative, is the key raw materials used in producing LAB. Which signifies, that the overall linear alkylbenzene sulfonate market price trends follow similar dynamics with petrochemical price. Therefore, wavering crude oil prices is likely to hamper the global business growth by 2024. Nevertheless, the industry will be positively influenced by increasing R&D investment by major product manufacturers for new product development. For instance, Clariant and Stepan Company had opened new R&D center in 2013 and 2014 respectively.

Asia Pacific led the overall linear alkylbenzene sulfonate market share and accounted for over 40% of the overall volume in 2015. Improving consumer lifestyle dynamics, spending pattern and growing population has significantly propelled the demand for personal care products and household detergents in the region. Furthermore, rapid industrialization in the region along with regulatory norms for maintaining hygiene in the industries has stimulated the industrial cleaners. This is turn will boost the overall business size by 2024.

Major industry share contributors including BASF SE, Huntsman Corporation and The Dow Chemical Company have presence across multiple stages of the industry ecosystem, and thus hold a prominent chunk of the overall business. Additionally, other prominent product manufacturers including Clariant and Stepan Company are involved in R&D investments for new product development in order to achieve competitive advantage.

Linear alkylbenzene sulfonate (LAS) is anionic surfactant broadly used in detergents and cleaners. LAS is the most preferred surfactant among detergent and personal care product manufacturers due to its comparatively low price and less toxicity. Increasing LAS demand for detergents & cleaners and personal care industries is expected to drive the global linear alkylbenzene sulfonate market size by 2024. Improved consumer lifestyle dynamics, spending pattern and growing pattern are the key industry growth contributors. The product is petrochemical derivative and thus follows similar price dynamics, this may hamper the business growth in the near future. Household detergents & cleaner led the overall demand in 2015. Regionally, Asia Pacific accounted for maximum chunk in the same year.

Linear Alkylbenzene Sulfonate market is likely to surpass a mammoth of 9 Billion (USD) by the end of 2024.
As per estimates, linear alkylbenzene sulfonate industry would account a crcr of 5% through 2024.