Lignosulfonates Market size was USD 700 million in 2015 and is anticipated to grow with more than 3.5% CAGR through 2024 driven by robust growth in construction sector. It is primarily used as a water-reducing chemical and imparts the necessary cement workability even at elevated temperatures.

Asia Pacific and Middle East & Africa are the major regions prone to severe problems associated with elevated temperatures, which reduces the cement workability. Lignosulfonates are typically used as plasticizers, while modified lignosulfonates are used as superplasticizers. In addition, it can be easily blended with other water-reducing chemicals such as sulfonated naphthalene formaldehyde (SNF), which makes them ideal for individual and combined usage in concrete admixtures application. 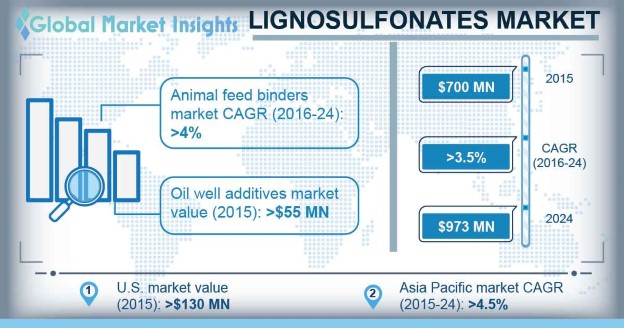 Factors such as infrastructure development and population growth in BRIC nations will boost the lignosulfonates market in residential and non-residential sectors. Furthermore, low product cost makes them more suitable for usage in these nations, where water-reducing chemicals demand is considerably high.

Global animal feed production was over 970 million tons in 2015 and might exceed 1 billion tons by 2024. Lignosulfonate is mainly used as animal feed binders (pellet binders) in the animal feed industry. It provides necessary calcium and sodium, which serve as inorganic electrolytes appropriate for animal health. In addition, it balances the beneficial bacteria in the animal body and promote feed efficiency, thereby increasing body animal weight up to 10%. Significant reduction in cecal pH takes place when calcium lignosulfonate is added to the feed. This is ultimately beneficial to the gastrointestinal tract animal’s health.

Sulfonated naphthalene formaldehyde, sulfonated melamine formaldehyde and polycarboxylic ether gives stiff substitution threat to lignosulfonate market share in application segments such as oil well additives and animal feed binders. Also, there are several animal feed binders including wheat, bentonite & clay, guar meal & starch and synthetic binders such as urea-formaldehyde. Notably, oil production in the Middle East & Africa stood at over 23 million barrels per day in 2010 and is projected to increase up to 28 million barrels per day in 2024.

Sodium lignosulfonate was valued at over USD 290 million in 2015. It is the most commercialized product, which is primarily preferred in concrete admixtures as a plasticizer and pellet binder in animal feed.

Sodium lignosulfonates market share is projected to experience gains at more than 3% CAGR. It is primarily used in animal feed application, mainly due to its antimicrobial and preservative properties similar to sodium and calcium lignosulfonate. Furthermore, it is used as a substitute for conventional chloride materials in dust control applications.

Animal feed binder shall witness highest growth of more than 4%. The product offers various added advantage including economical pellet binder in animal feed application over the forecast timeframe. Furthermore, it helps in improving animal weight and in maintaining the animal’s gastrointestinal health.

North America was valued at over USD 130 million in 2015. Currently, there are around 6,000 animal feed mills in the U.S., which are engaged in producing approximately 150 million tons of finished animal feed per annum. As a result, this must boost the regional lignosulfonate market growth.

Asia Pacific will witness gains exceeding 4.5%. Increasing construction expenditure in China, India and Japan will propel lignosulfonate market by 2024. For instance, in 2015, Japan’s construction spending was more than 700 billion. In addition, increasing animal feed demand in China will further complement industry growth over the forecast timeframe.

Lignosulfonates market report includes in-depth coverage of the industry, with estimates & forecast in terms of volume in kilo tons & revenue in USD million from 2013 to 2024, for the following segments:

The global lignosulfonates industry size attained close to USD 700 million in annual revenue in 2015 and is pegged to expand at a 3.5% CAGR up to 2024 owing to significant developments in the construction sector.
The sodium lignosulfonate market share is anticipated to witness a CAGR of more than 3% through 2024 driven by higher usage in animal feed applications.
The overall market revenue from animal feed binders is likely to rise substantially at a growth rate of 4% through 2024 due to the increasing need for enhancing the animal weight and gastrointestinal health.
Asia Pacific is poised to observe gains at over 4.5% up to 2024 owing to the higher construction expenditure in countries including China, India, and Japan.
Customize this Report
Inquiry Before Buying