Less Lethal Ammunition Market size valued at USD 1.05 billion in 2020 and is estimated to exhibit over 2.9% CAGR from 2021 to 2027. Less lethal ammunition is also known as riot control ammunition and is designed to minimize the risk of serious injuries or death when used as intended. The less lethal ammunition is used in situations like to disperse riots or civil disturbance, to weaken the individual rioters, in hostage rescue and other police operations. 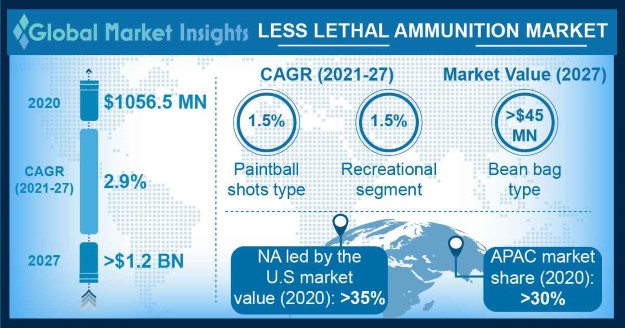 Less lethal ammunition manufactures are continuously investing in research and development to enhance safety in non-lethal munitions. Market participants are working on producing products that have more impact on the given applications without causing lethal injuries. Development of products such as coated metal bullets, will induce significant potential in less lethal ammunition industry landscape.

The rubber shot segment generated around USD 750 million in less lethal ammunition market revenue in 2020. The rubber shot engine will showcase considerable growth through 2027 owing to the significant use of rubber bullets by the law enforcing agencies for controlling civil disturbance and protestors in a riot or mobs. Moreover, many paintball gun manufacturers are developing a gun that can fire different types of less lethal ammunition in situations such as to have protection against sudden invaders or thieves. 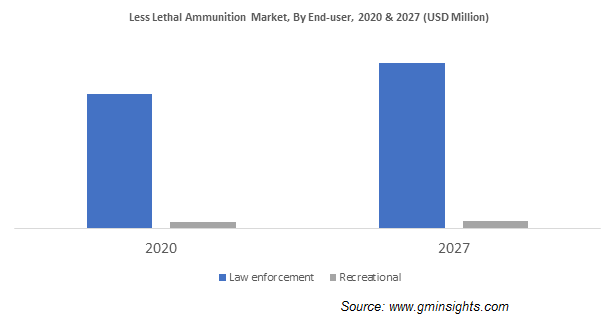 The less lethal ammunition market from recreational end use segment is likely to witness above 1.5% CAGR from 2021 to 2027. The increasing competitive team shooting sports activities worldwide, where players eliminate other players by hitting them with spherical dye-filled jelly balls also known as paintball. The rising involvement of the youth population in recreational sports and increasing popularity of paintball sports among millennials globally are gaining traction. Asia Pacific has developed as a profitable region for less lethal ammunition manufactures due to increasing recreational activity such as paintball sports and water sports. The paintball technology is also utilized by the various paramilitary, law enforcement, armed forces, and security organizations to supplement military or other training.

The ongoing covid-19 has significantly impacted recreational sports worldwide impelled by stringent lockdown and social distancing norms by several government authorities, Moreover, the average lock-down duration across the world is nearly 30-40 operational days, which is predicted to affect the overall sales in 2020.

North America to bank upon presence of multiple industry players 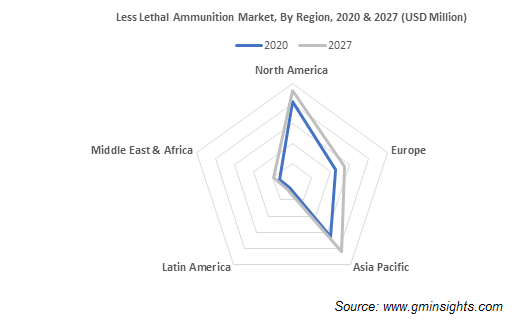 The less lethal ammunition industry to be highly fragmented

The industry is highly fragmented with presence of many small and large market players worldwide. Market participants are engaged in collaboration with the law enforcing agencies to have a competitive advantage over other companies. Technological improvements in less lethal ammunition are set to have a huge impact on industry development. For instance, in September 2020, The Defence and Security Accelerator (DASA) has launched the program to develop advance less lethal weapons for police and law enforcement agencies to halt violent or armed offenders with the nominal necessary force from distance.

The market revenue for less lethal ammunitions was recorded at USD 1.05 billion in 2020 and will grow at a CAGR of more than 2.9% through 2027.
The rubber shot segment accounted for a revenue share of nearly USD 750 million and will grow owing to rising preference for rubber bullets by law enforcing agencies to control protestors and civil disturbance in mobs or riots.
The overall market size from recreational activities will grow at a CAGR of over 1.5% through 2027 with the increasing competitive team shooting sports activities across the world.
North America accounted for 35% of the less lethal ammunition industry share in 2020 and will expand due to increasing recreational activities’ popularity and the presence of major market players.
Customize this Report
Inquiry Before Buying