Consistent rise in terror attacks worldwide and increased spending on defense modernization programs will augment the demand for various types of ammunition. According to the latest Global Terrorism Index (GTI), in 2021, the number of attacks had surged by 17% compared to the previous year. The rise in attacks represents the need for law enforcement and military agencies to maintain a robust arsenal for national security. 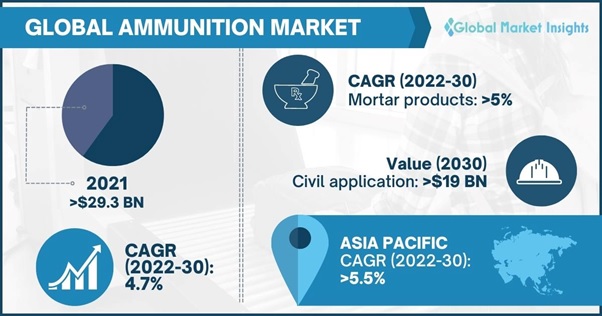 In regions such as North America and Europe with strong defense capabilities, the adoption of modern equipment and infrastructure is growing. For instance, the Russia-Ukraine war in 2022 urged Germany to introduce a USD 112 million security fund to support the modernization of its military capabilities. Similar investments across the globe will boost the manufacturing of advanced weaponry and fighter aircraft, expanding the medium & large caliber ammunition industry share.

Government efforts to curb gun violence and public outrage against domestic attacks could act as barriers to the industry growth. A few countries in Latin America are looking to adopt stringent laws on gun ownership including nations where gun possession by civilians is legal. Increasing crime rates in developing countries may further impact weapon laws, hampering ammunition demand.

Expansion of defense forces to drive the mortar segment growth

The global ammunition market sales from mortar products will record more than 5% gains through 2030 owing to a rising number of cross-border conflicts in regions such as Europe and the MEA. The product offers various benefits for military personnel including portability, easy maneuverability, and the ability to be used from trenches.

Considerable spending to reinforce naval and ground defense forces across the world will influence the manufacturing of artillery products. In 2022, the UK government announced that it has increased its naval budget to nearly USD 45.9 billion, which is a notable change compared to the previous budget. Reportedly, the funding will be directed toward enhancing the navy’s lethality, fleet availability, and developing a more high-tech force. The move represents a substantial potential for artillery and large-caliber ammunition demand to fortify sea and air defense systems.

Recreational activities to boost the growth of civil application segment 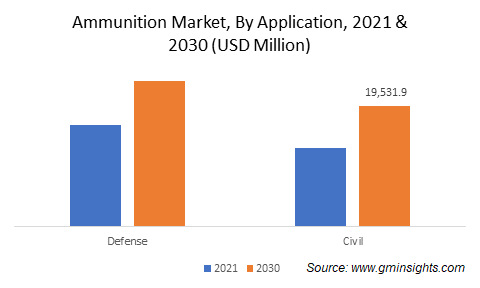 Based on ammunition sales statistics, the civil application is predicted to surpass USD 19 billion by 2030 with increased spending on public security and the growing use of guns for recreational activities. Smaller firearms witness considerable sales in countries such as the U.S., Canada, and Brazil, among others. In North America, gun ranges and shooting sports are quite common. Government agencies allow people to hunt and shoot on designated lands, keeping public safety in mind. High expenditure on local law enforcement agencies will further strengthen small caliber ammunition demand.

Military partnerships in the Asia Pacific 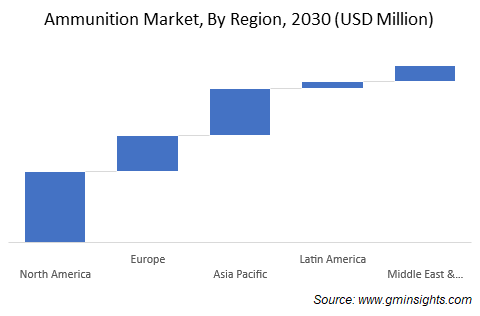 In terms of regional performance, the Asia Pacific ammunition market size is expected to witness growth rate of more than 5.5% up to 2030. Prominent industry drivers include growing defense budgets in countries such as China, India, and Japan. Nations are also aiming to improve their military capabilities through transformative programs to address civil & cross-border tensions. For instance, India, Japan & Australia are part of the Quad Group with the U.S. being the fourth member. These countries are collaborating to develop their technical expertise and improve their strategic advantages.

Despite the global economy slowing down in 2020 - 2021 due to coronavirus pandemic, the overall sales of arms had increased. At the end of 2021, SIPRI reported that the high sales can be attributed to continuous government demand for military products and security services. However, supply chain disruptions did affect a few weaponry manufacturers in 2020, where they reported lower sales in some areas. Ammunition market trends in 2022 and beyond will depend on increased crime rate in the COVID-19 pandemic and government efforts to strengthen citizen security.

This market research report on ammunition includes in-depth coverage of the industry with estimates & forecast in terms of revenue in USD million from 2017 to 2027, for the following segments

The global ammunition market size surpassed USD 29.3 billion in 2021 and is projected to register around 4.7% CAGR from 2022-2030, says this GMI report.
It is estimated that the ammunition industry revenue from civil applications will be more than USD 19 billion by 2030 driven by increased demand for public safety and the popularity of recreational shooting activities.
Global ammunition sales from mortar segment is expected to witness over 5% CAGR between 2022-2030, with a surge in cross-border conflicts and increase in defense budgets in developed countries.
Global Market Insights Inc. predicts that APAC ammunition market size will expand at around 5.5% CAGR till 2030, with growing military spending in China, India, Japan, and other countries.
Some of the leading ammunition companies worldwide include Northrop Grumman Corporation, Ruag Ammotech, Elbit Systems Ltd., Magtech, NAMMO AS, BAE Systems, Nexter Group, Global Ordnance, and CGI.
Customize this Report
Inquiry Before Buying