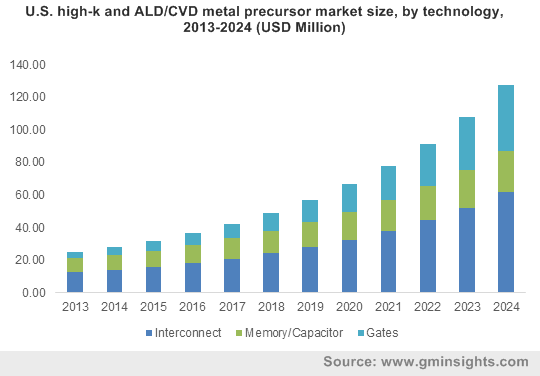 Significant process development initiatives and high demand for improved semiconductor devices will drive high-k and ALD/CVD metal precursor market size in the coming years. Phase-Change Materials (PCM) have been deposited by physical vapor deposition techniques or other sputtering methods. These are inherently weak in terms of deposition uniformity. Therefore, alternative deposition methods like MOCVD have driven demand, which is mainly due to benefits of industrial scaling and compositional control.

Interconnects led global demand in 2015, with over 45% of the high-k and ALD/CVD metal precursor market share in the same year. Non-planar transistors and new memory technologies are expected to expand opportunities for thin film materials suppliers in order to speed up fabrication processes and time to market.

High-k metal gate precursor market share will grow at over 22% CAGR estimations from 2016 to 2024. These have considerable potential for replacment of silicon oxide in the 65 nm CMOS technology space. The major requirements include thermal and chemical stability, a high dielectric constant, and high band offset with electrodes. Other desirable traits include compatibility with the gate electrode material and the interface state density. Significant need for a timeline and accurate translation of large amount of content will drive demand in various technology industries.

China metal precursor market share was more than 35% of the Asia Pacific revenue in 2015. Increasing semiconductors demand from BRIC nations on account of high electronics consumption may significantly drive adoption. Other factors include portability, low cost, and considerable number of options.  UP Chemical and Chemtura Corporation formed a joint venture in order to produce high purity MO precursors to cater to the LED sector, focusing Asia Pacific in general and South Korea in particular.

Supply chain management is becoming a critical competence for materials suppliers. Rising demand for semiconductor materials owing to process complexity has increased the focus on formulation of sub-suppliers. The market primarily comprises large number of silicon wafer and mechanical component vendors. Samsung is a major player in Korea; in order to drive product differentiation and profitability, the company has been expending manufacturing of its 20 nm class of DRAM.