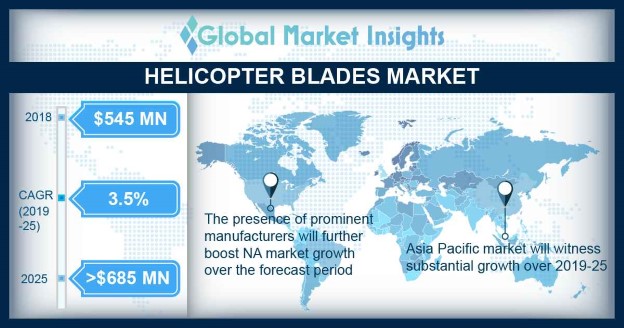 Increasing helicopter sales across the globe owing to rising applications in military and emergency medical services (EMS) among others are driving the helicopter blades market share over the study timeframe. The development of advanced new helicopters with increasing payload capabilities, comfort, connectivity, and ease of operations are diversifying its applications across EMS. Additionally, an upsurge in military and defense budgets globally are providing a positive outlook for the industry expansion.

The ability of helicopters to perform a diversified range of operations including vertical take-off and landing operations along with the capability to hover across areas are expanding the helicopter blades market size. Additionally, the usage of light materials for producing such aircrafts with a focus on improving efficiency and reduce carbon emissions are the prime focus areas of manufacturers to increase their business share.

The increasing adoption of smart helicopter technologies are enabling OEM’s to diversify their product portfolio and gain competitive edge over the competition. The incorporation of innovative blade systems including the active blades with the capability of adapting to the aerodynamic properties of helicopter blade flows enables for efficient flight travel. Additionally, the smart blades also enable for reduced vibrations, noise & harshness, thereby boosting the helicopter blades market share over the study timeframe.

Industry participants are continuously upgrading their product portfolio by introducing newer variants with multiple blade rotors to improve the overall helicopter in-flight experience. These are also designed with a focus on minimizing noise, turbulence, and vibrations along with focus on improving efficiency. For instance, in July 2018, Airbus launched H160 helicopters with an advanced Blue Edge five-bladed main rotor system, thereby enhancing the helicopter blades market share. 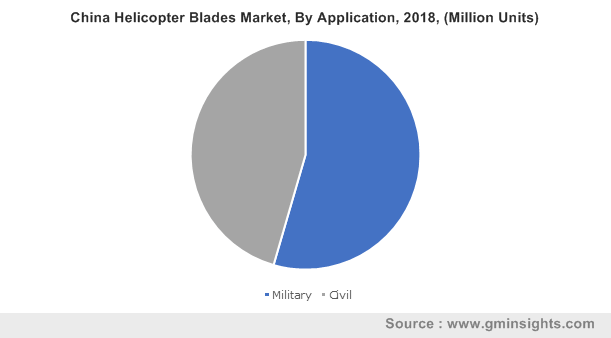 Military segment will witness significant growth owing to the development of helicopters with a wide range of applications and operations including high-speed combat and stealth among others. The advanced helicopters can reach a speed of around 250 miles/hr and are equipped with efficient rotor systems that reduces airflow breakdown possibilities for enhancing helicopter speed. Defence organisations including the Russian Ministry of Defence are testing their main rotor blades systems for combat helicopters for assisting in military operations. For instance, in December 2018, Russian Defence Ministry approved the development of combat helicopters and invested around USD 130 million in the project. Additionally, military organisations across the globe are procuring new helicopters to enhance their defence power. For instance, April 2019, the U.S. agreed to sell its multi-role MH-60R helicopters to India. The country is also expected to purchase 24 Seahawk maritime helicopters with an estimated cost of around USD 2.6 billion.

The tail rotor blade will showcase a significant growth owing to the rising helicopter production and deliveries across the globe. The tail rotor maintains the helicopter balance and prevents the movement in unwanted direction. The development of composite tail blades with reduced vibration levels compared to conventional blades further boosts the product penetration. The expansion of manufacturing and production facilities are positively influencing the segment share. For instance, in April 2019, Airbus Helicopters opened its additional assembly line for light weight twin H135 in China.

Carbon fiber reinforced plastic (CFRP) will account for significant share in the helicopter blades market size. This can be credited to the superior strength offered by these materials for supporting helicopter operations. Additionally, the material offers higher specific modulus, that contributes significantly towards lowering helicopter weight and improving blade strength, thereby further proliferating the segment size.

The glass fiber reinforced plastic (GFRP) will showcase a considerable growth in the helicopter blades market share over the projected timeframe. The material offers significant advantages over the conventional blade materials including lower manufacturing cost, light weight, and ease in manufacturing processes. However, the lower stiffness may limit its usage in main rotor blades.

OEM is expected to account for a significant volume share in the helicopter blades market size. The dominance can be attributed to the increasing helicopter production globally. The advent of light weight materials along with rising focus on upgrading existing helicopter fleet with advanced blades for increasing payload capacities. For instance, in March 2019, Airbus announced the upgradation of its H145 helicopters with five-blade rotor technology for increasing the total payload by 150 kg.

Aftermarket will grow considerably in the helicopter blades market owing to the requirement for periodic maintenance over a period of definitive flight cycles. The parts are required to be replaced owing to wear and tear coupled with stringent airworthiness regulations. The helicopter service providers are continuously engaged in long term agreements with MRO providers for carrying out the maintenance of their fleet. For instance, in April 2019, Caverton Helicopters signed a multi-year maintenance contract with Heli-One for serving their Sikorsky S-76C++ helicopters. 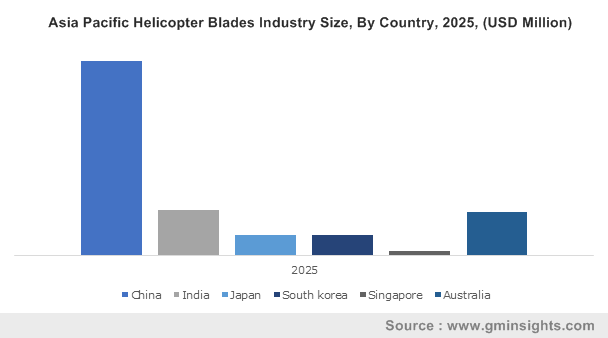 North America helicopter blades market share will witness significant growth owing to the presence of prominent manufactures across the region. Manufacturers are opening new production and manufacturing facilities for supporting the growing helicopters demand. For instance, in March 2019, Kopter announced the opening of its new SH09 helicopter production facility in the U.S. Moreover, rising defense budget along with continuous upgradation of existing military helicopters are further supporting the regional expansion. For instance, in March 2019, the U.S. government proposed a budget of around USD 720 billion for Department of Defense.

Asia Pacific will grow considerably in the helicopter blades market shre over the projected timeframe. This can be attributed to the rising helicopter usage in emergency rescue operations. For instance, in November 2018, Russian Helicopters signed a deal for providing 20 Ansat EMS light twin helicopters to the Emergency Medical Association of China. Additionally, proliferating tourism in the region is resulting into growing helicopters demand. For instance, in February 2018, Nautilus Aviation received two bell helicopters for charter, tourism and utility operations.

Industry participants are testing newly developed products against the stringent flight tests to ensure compliance with safety regulations. The long-term contracts with helicopter manufacturers and R&D investments to develop advanced products are the growth strategies adopted by the manufacturers to enhance their market share.

The market size of helicopter blades was hit USD 545 million in 2018.
The industry share of helicopter blades is estimated to exhibit over 3% CAGR from 2019 to 2025.
Prominent market players consist of Airbus S.A.S., Van Horn Aviation, LLC, Bell Helicopter Textron, Boeing, Lockheed Martin Corporation, and Hindustan Aeronautics Limited.
Manufacturers of helicopter components are aiming to incorporate lighter materials to improve overall efficiency and minimize carbon emissions.
According to this research report by GMI, the APAC market is witnessing high traction on account of increased use of helicopters in rescue operations.
North American industry will witness significant growth through 2025 owing to presence of prominent manufactures across the region.
Customize this Report
Inquiry Before Buying