Food & Beverages Color Fixing Agents Market size was valued at around USD 2.4 billion in 2020 and is set to record over 4.9% CAGR from 2021 to 2027. The increasing demand for processed meat will fuel the growth of the global market over the forecast period.

Increasing fish production and consumption across the globe will propel the growth of the food & beverages color fixing agents market in the near future. According to the Food & Agriculture Association (FAO), the global fish production increased to nearly 179 million tons in 2018 from around 154 million tons in 2011. This is projected to grow at a significant CAGR in the near future. This growth in fish production and consumption will fuel the product demand over the forecast period. Global fish output peaked in 2016 at around 171 million tons, with aquaculture accounting for 47% of the total production and 53% if non-food applications (such as reduction to fishmeal and fish oil) are excluded. In 2016, the overall first-sale value of fisheries and aquaculture production was anticipated to be USD 362 billion, with aquaculture production accounting for USD 232 billion.

The rising usage of sodium nitrite will complement the industry expansion 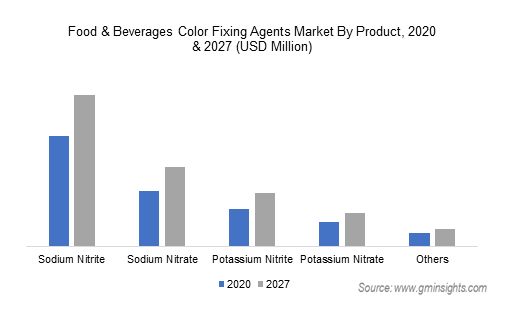 Food & beverages color fixing agents market from sodium nitrite segment held the largest share of around 45% in 2020 and is projected to grow at a CAGR of over 4.7% during the forecast period due to the product's widespread availability and widespread use in the meat business. Sodium nitrite segment expansion will be fueled by the rising demand for processed meat over the assessment period. Sodium nitrite is a salt and antioxidant used in the curing of foods including bacon, ham, and hot dogs. Furthermore, the potassium nitrite segment is anticipated to grow at a CAGR of 5.4% during the forecast period. The growing product usage in the fish & poultry industry is likely to have a positive impact on the food & beverages color fixing agents’ industry statistics in the coming years. 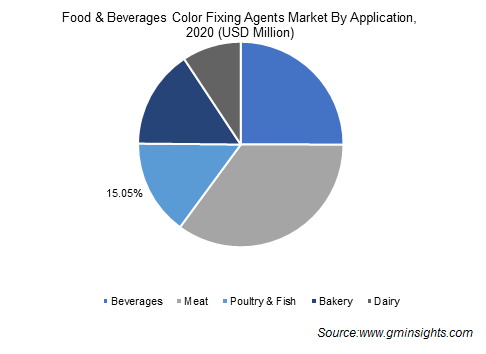 North America to witness a significant growth during the forecast period 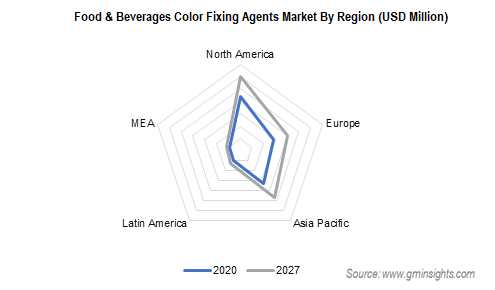 The Food & Beverages Color Fixing Agents Market research report includes in-depth coverage of the industry with estimates & forecast in terms of volume in kilo tons & revenue in USD billion from 2017 to 2027 for the following segments: