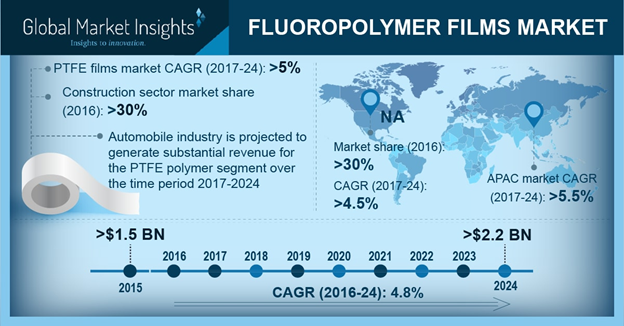 The global market is highly competitive in nature. These films are conventionally manufactured on a large scale. Manufacturing of fluoropolymer films entails extensive equipment and several processing steps. Production of fluoropolymer films involve sintering, melt processing, coating, paste extrusion processes. The proficient manufacturers in the value chain are active in the developmental strategies for expansion of their business beyond regional terrains.

Polytetrafluoroethylene [PTFE] polymer was the largest segment in 2016 and is projected to exhibit a CAGR of over 5% during the assessment period. PTFE are strong and nonflammable synthetic resin manufactured through the polymerization of tetrafluoroethylene. It possesses extremely high melting point and are widely resistant to chemicals. These properties make it ideal for its use in various end user industries. The growing demand for PTFE in automobile industry due to its low friction, thermal & chemical resistant coupled with its ability withstand high temperatures, which makes it desirable for high temperature fluid applications in the automotive. The most common automobile applications include fuel hoses, hydraulic brake fluid, clutch fluid, and cooling applications. The growing automobile industry is projected to generate substantial revenue for the PTFE polymer segment throughout the given period 2017-2024.

The construction application was the largest fluoropolymer films market segment in 2016 that held over 30% share. Fluoropolymer films are used in construction as it provides thermal insulation, weight and structural benefits over traditional construction materials. Ethylene Tetrafluoroethylene (ETFE) film based roof applications are self-cleaning and provide increased support under heavy stress. These films are also used in paint & coatings, which provides with enhanced durability, increased ultraviolet resistance, aesthetics and also aids in the extension of life cycle of building and bridges. 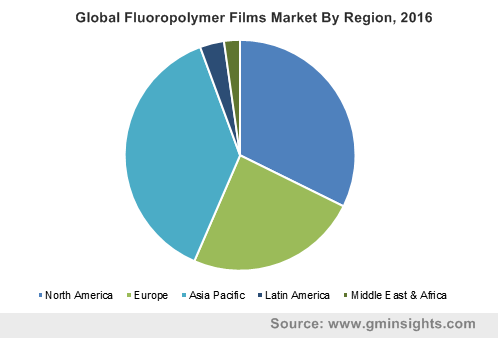 Asia Pacific was the largest revenue generating region in 2016 closely followed by North America. Asia Pacific market of fluoropolymer films is projected to exhibit the highest CAGR of over 5.5% during the assessment period. The growing construction industry in the region along with the ongoing government schemes for infrastructure development is projected to positively contribute to the market growth. Moreover, the growing electronics market in the region especially Japan and India shall further surge the demand for the product. North America held a market share of over 30% in 2016 and is anticipated to grow at a CAGR of over 4.5%.