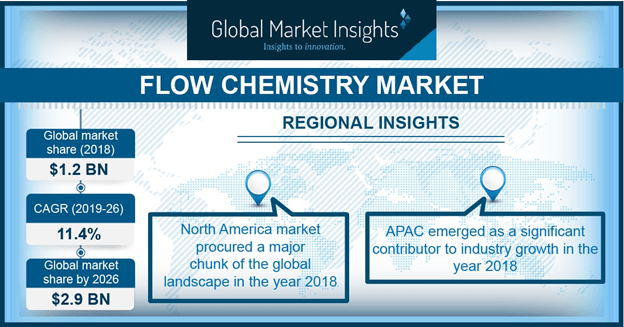 Flow chemistry is a technology in which chemical reactions are run in a continuous flowing stream and not in batches. In the process, pumps are used to facilitate the movement of fluid into a tube and when these fluids come in contact with each other, reaction takes place. The technique has enabled many chemical processes to be more efficient, cleaner, safer, cheaper and faster.

Chemical industry is the primary user of continuous flow technology as the bulk chemical manufacturers such as fertilizer and sugar manufacturers deal with low price and high-volume products and hence are highly dependent on productivity to deliver the desired volume. As flow chemistry makes bulk processing quite easy and economical, the technology is being adopted by many chemical manufactures worldwide. The technology is generally used to undergo reactions which are hazardous in nature such as oxidation, hydrogenation, halogenation etc. Strengthening chemical sector of Asia Pacific is one of the major contributors for increasing demand of flow chemistry in the region. The chemical industry of Asia Pacific contributed around USD 2.6 trillion to the overall GDP of APAC making it one of biggest industries in the region. The chemical sector in the region is strongly driven by rising demand for cosmetic, soaps and detergents as emerging economies are shifting towards consumer- led economy supported by increasing middle class population in countries such as China, India and Japan.

Flow chemistry also have few disadvantages. For instance, heterogenous mixtures can be a bit difficult to process as a result of clogging in reaction tubing. Furthermore, if the chemical reaction is slow, the process does not provide any such advantages over batch processing.

CSTR emerged as the most used flow reactor

Flow chemistry system typically comprises of one or more microreactor system, CSTR, Plug Flow Reactor or Mesoreactor. Continuous stirred tank reactor (CSTR), also known as continuous flow stirred tank reactor (CFSTR) is used to feed & exhaust reactants continuously. The reactor is primarily utilized in homogenous liquid flow reaction which require constant agitation. It can be used all by itself, in battery or in series. CSTRs are generally used as loop reactors in pharmaceutical industry. CSTRs are operated at a steady state and there is no position or time dependence of concentration and temperature inside CSTR. These types of reactors are also used in wastewater treatment processes because of their ability to provide resistance to both high and low PH fatty acids waste.

Bulk chemicals are a category of chemicals which are produced in large quantities to fulfill the demand. Few bulk chemicals generally synthesized using continuous flow technique are sulfuric acid, ammonia, methanol, formaldehyde, sodium hydroxide and many more. Many industries including food & beverages, fertilizers etc. are dependent on flow chemistry for producing bulk chemicals. As a result of increasing application of the technology in bulk chemicals, chemical industry has emerged as the key end user sector of flow chemistry technology contributing to over one-third of the overall demand. Production growth in the US have resulted in the addition of over 10 million tons of liquid phase bulk chemicals in the year 2016. Major chemical additions in the country include ethylene, methanol, ammonia, propylene as well as their derivates mainly fertilizers and plastics. Increasing production of bulk chemicals is anticipated to positively influence flow chemistry market outlook in the upcoming years.

Can North America do justice to its growth potential?

Apart from North America, APAC also emerged as a significant contributor to flow chemistry market growth supported by rising pharmaceutical manufacturing in the region. Indonesian and Indian pharmaceutical industry are two of the major contributors to overall growth pharmaceutical sector in the region supported by rising urbanization and government’s efforts to increase domestic production of drugs in the country. Philippines government has also been continuing the efforts to expand its health care industry by increasing funding in the sector.

Flow chemistry is an emerging technology in the industry and has been gaining attention of many players in the market attributed to advantages offered by the technology over traditional batch production such as bulk production and cost effectiveness. Companies are keen to adopt strategies in order to tap a higher market share. For instance, Chemtrix BV has announced the delivery of a new flow chemistry technology plant located in India. The plant has the capability to operate at muti-tonne scale with highly challenging operations facilitated by using ceramic reactors. The new plant will help the company in gaining a competitive edge over other players as it will be one of the largest flow reactor plant in the country.

Flow Chemistry Market research report includes in-depth coverage of the industry with estimates & forecast in terms of volume in kilo tons & revenue in USD million from 2016 to 2026, for the following segments:

flow chemistry market’s recorded worth was USD 1.2 billion in 2018.
In 2026, the flow chemistry industry is estimated to record a valuation of USD 2.9 billion.
Flow chemistry is a technology in which chemical reactions are run in a continuous flowing stream and not in batches. In the process, pumps are used to facilitate the movement of fluid into a tube and when these fluids come in contact with each other, reaction takes place.
According to this report, North America has registered itself as the highest growth market for flow chemistry technology as a result of surging chemical industry in the region.
Report estimates, market value of flow chemistry was over USD 1 billion in 2018 and is expected to witness a CAGR of approximately 11% between 2019 and 2026.