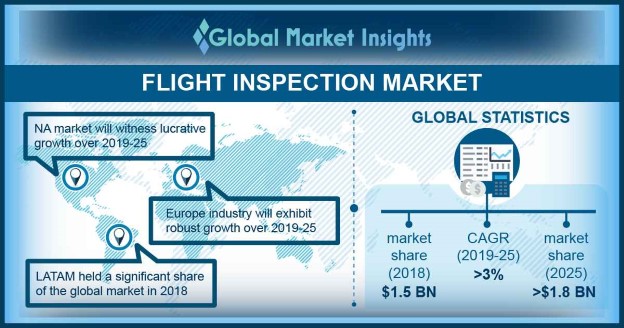 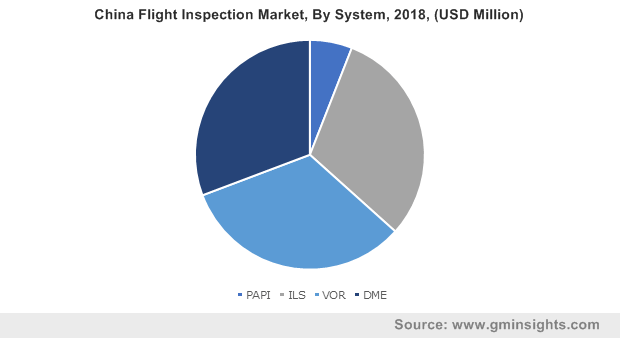 Commercial airports will witness significant growth in the flight inspection market size owing to the increasing passenger traffic across the globe. As per FAA, the airliners are serving around 2.5 million airline passengers in over 43,000 air travels per day. Increased aircraft frequency is escalating the inspection requirement to ensure passenger safety. Industry participants involve in new solutions for superior system reliability. For instance, in December 2016, Safran announced the delivery of Carnac MS calibration system to International Flight Services (IFS) in Peru for air travel support. The system enables the validation and inspection of automated and landing navigation aids.

Military airports will register significant growth with requirement of accurate and safe guidance system for aircraft landing in normal and adverse weather conditions. Scheduled inspection check-ups and calibration of navigational aids as per regulatory standards will proliferate the segment growth. Increasing investments on projects on development of military air bases, runway expansion and operational facilities will enhance the industry size. 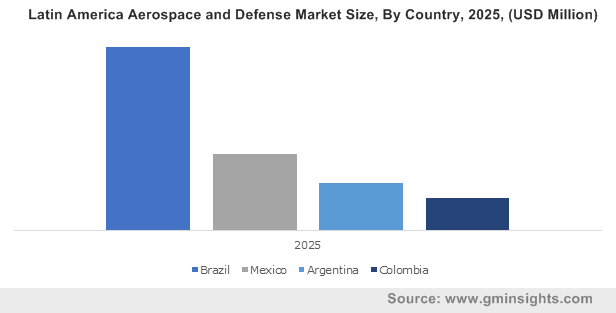 North America will witness significant growth in the flight inspection market with emergence of regulatory guidelines for airport infrastructural development. For instance, in august 2018, the FAA announced an investment of over USD 620 million in airport infrastructure projects. Further, the organization allocated funding of around USD 3 billion in Airport Improvement Program. This program will provide over 242 grants for around 226 airports and 408 infrastructure projects positively influencing the industry size.

The market size of flight inspection was valued at around USD 1.5 billion in 2018.
The industry share of flight inspection is estimated to exhibit over 3% CAGR from 2019 to 2025.
Government bodies have been promoting the need to replace old systems with advanced inspection systems that will enhance the safety of an airplane.
Military applications require safe and accurate guidance system for an aircraft to land in both adverse and normal weather, along with many scheduled inspections that will drive the system demand.
There has been an escalation in the frequency of air traffic and an expansion of airport infrastructure that rely on navigational systems, leading to the need for flight inspection technologies.
Flight inspection systems are now advanced as they are equipped with technology like FAROS to indicate runway occupancy and solar panels for providing alternative source of energy.
Customize this Report
Inquiry Before Buying