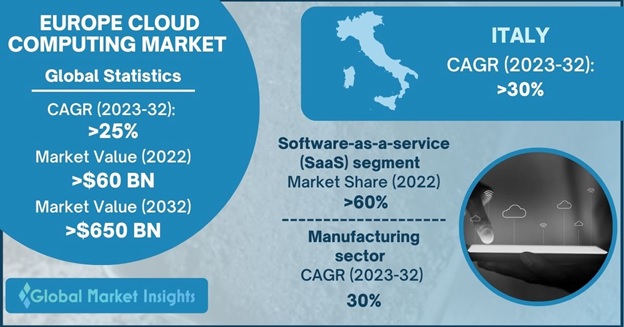 The cloud computing market growth in Europe is attributed to the rising investments by colocation service providers to expand their regional presence and cater to the computing needs of customers. For instance, in December 2018, AWS opened a new AWS Europe (Stockholm) Region. This enables developers, startups, government, and non-profit organizations to run their applications in Sweden and cater to the needs of end users across Nordic countries including Denmark, Iceland, Finland, Norway, and Sweden. The establishment of several data centers in Europe has triggered the adoption of cloud infrastructure services including PaaS and IaaS. As enterprises are migrating to cloud platforms to reduce capex costs and increase operational efficiency, the demand for computing services will rise sharply over the projected timespan. Another factor contributing to the market value is supportive government initiatives to speed up digitalization across all economic sectors. For instance, in July 2018, the French government introduced Cloud Strategy for the use of cloud computing by the administration. The government aimed at accelerating the use of cloud by public institutions and location authorities within a span of three years. However, stringent data security regulations across Europe and the lack of skilled expertise may hinder the industry growth from 2019 to 2026. 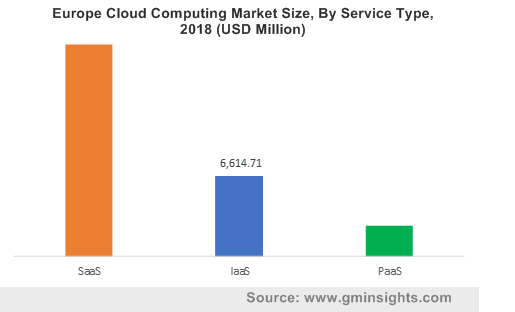 The SaaS segment held the largest share of around 65% of the Europe cloud computing market in 2018 and is expected to maintain its dominant market revenue share by 2026 due to an extensive adoption of SaaS platforms. SaaS is a software licensing model, which includes the delivery of a centrally hosted software through a subscription basis. The rising demand for Customer Relationship Management (CRM), accounting management, and Enterprise Resource Planning (ERP) software has further contributed to the demand for SaaS platforms, enabling users to connect to the application over the internet. As all the underlying infrastructure is managed by a service provider and users can scale up or down according to their level of app usage, the demand for these platforms will rise.

The hybrid cloud segment will exhibit the fastest market growth rate of over 15% from 2019 to 2026 due to the growing need among enterprises to keep their sensitive data secure in private cloud while simultaneously benefitting from public cloud’s on-demand scalability and cost-efficiency. Hybrid cloud is the most preferred method of cloud deployment in Europe due to concerns over data security and privacy, particularly in countries including Germany, France, and the UK. As enterprises become aware of the advantages of hybrid cloud and other cloud computing models, such as enhanced business agility and secure operations, the adoption of hybrid cloud is expected to grow profoundly which will contribute to overall increase in market share.

Cloud computing laying a significant impact on the IT & Telecom sector 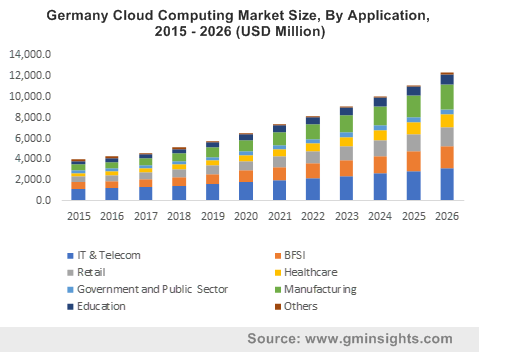 The IT & telecom sector in Germany will grow at a CAGR of over 10% by 2026 due to extensive demand for cloud computing to reap the benefits of cost-effectiveness and agility. With rising internet-based communication services, the storage infrastructure needs have undergone a tectonic shift. This has led to the adoption of cloud services to handle the exponentially growing data and support on-demand resource provisioning. According to the report published by the German digital industry association, BITKOM, in 2018, nearly 45% of German enterprises had adopted some form of cloud computing services, with additional 24% planning to adopt the services by 2020. In December 2016, Alibaba partnered with Vodafone Germany for providing its cloud services in the region. The collaboration allowed Vodafone’s users to purchase Alibaba cloud services through Vodafone private cloud platform.

The cloud computing market landscape in EU is also observing a huge usage of SaaS platforms, enabling consumers to use applications that run on cloud-based infrastructure. The IT & telecom sector is witnessing a huge adoption of public cloud platforms offered by cloud computing providers, including AWS, Microsoft and Google to ease the management of their rapidly growing and complex IT infrastructure. This enables enterprises to support data center consolidation and helps them to run IT or telecom applications on their network.

Huge cloud adoption is driving market growth in the Nordic 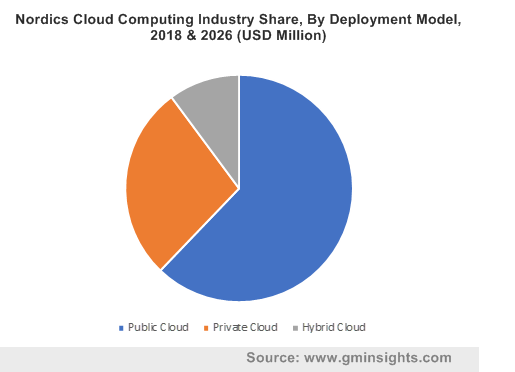 In Europe, Nordic countries including Denmark, Finland, Norway, Sweden, and Iceland will witness the fastest market growth over the forecast timeline due to favorable government initiatives to support digitalization, improving internet connectivity, infrastructure, and rising trend of IT outsourcing. For instance, the government of Finland allocated USD 451 million to provide support to various digital projects run by local authorities between 2018 and 2022. Also, the global cloud solution providers are rapidly expanding their presence in the region by opening new data centers, which will contribute to market revenue. For instance, in May 2019, Google announced an investment of USD 670 million to build a cloud data center in Finland. The investment is aimed at expanding Google’s existing data center facilities in Finland for promoting the launch of its cloud gaming platform Stadia.

Geographic expansion to stay competitive in the market

Companies operating in the market are focusing on geographic expansions to expand their reach and gain a competitive edge over competitors. For instance, In September 2019, Microsoft strengthened its presence in the European cloud computing market with the launch of Azure cloud services in Germany and Switzerland. The launch is expected to help Microsoft deliver IoT, AI, and cloud container services in the region, fully compliant with German data laws. Some leading players in the market are laying more emphasis on integrating Artificial Intelligence (AI) and analytics across clouds to differentiate their offerings and stay competitive.

The Europe cloud computing market research report includes in-depth coverage of the industry with estimates & forecast in terms of revenue in USD from 2015 to 2026 for the following segments:

The market size of European cloud computing exceeded USD 25 billion in 2018.
The industry share of European cloud computing is estimated to grow at over 12% CAGR between 2019 and 2026.
Cloud computing service is gaining popularity over traditional on-premise deployments as it enables customers to pay only for the services they use and run their infrastructure more efficiently.
The Europe cloud computing market growth is attributed to rising investments by colocation service providers to expand their regional presence and cater to the computing needs of customers.
The Software-as-a-Service (SaaS) segment held the largest industry share of around 65% in 2018 and is expected to maintain its dominance by 2026. The rising demand for Customer Relationship Management (CRM), accounting management, and Enterprise Resource Planning (ERP) software has further contributed to the demand for SaaS platforms, enabling users to connect to the application over the internet.
In Europe, Nordic countries including Denmark, Finland, Norway, Sweden, and Iceland will witness the fastest market growth over the forecast timeline due to favorable government initiatives to support digitalization, improving internet connectivity, infrastructure, and rising trend of IT outsourcing.