Defense Ground Support Equipment Market size exceeded USD 500 million in 2019 and is estimated to grow at over 2% CAGR between 2020 and 2026. 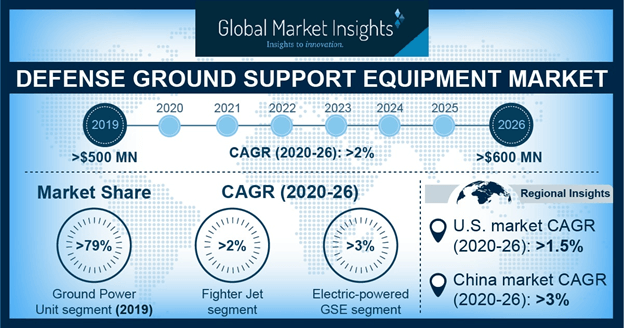 For instance, in December 2019, Lockheed Martin received a contract from the U.S. Marine Corps for USD 50 million to provide Autonomic Logistics Information System (ALIS) hardware and support equipment for its F-35 fleet. Under this contact, the company will install ALIS hardware in F-35 fleet, which will help the operator to plan maintenance activities and provide training & technical data. The ALIS helps in reducing the maintenance & operational cost and increasing the fleet availability, which are the most crucial aspects in the current political scenario.

The major power types used in defense ground support equipment are diesel, electric, and hybrid. Electric-powered GSE will register around 3% gains during the forecast timeframe due to stringent government regulations for the reduction of carbon emission or zero emissions. Increasing military expenditure with extensive investments in emerging economies of Asia Pacific including China, India, and Japan is supporting the growth of the segment. 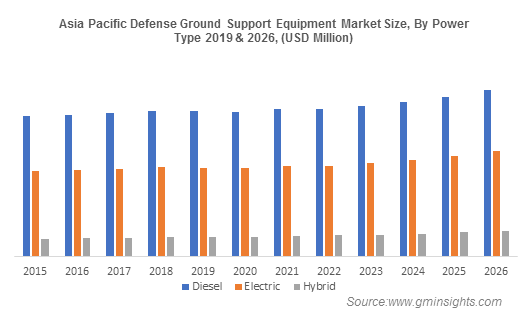 The ongoing trends in technological advancement for the development of defense ground support equipment with active investment in R&D by major players are anticipated to support the market share. Government agencies and organizations in the region are engaged in signing strategic contracts with industry participants to provide ground support equipment.

For instance, in November 2016, Taiwan Air Force offered modification to a previously awarded contract worth USD 12.35 million to provide equipment for 144 F-16 aircraft. The contract also provides integrated ground software to support the maintenance of aircraft. The activities are performed at Taiwan and Texas while the expected completion of contract is May 2022. 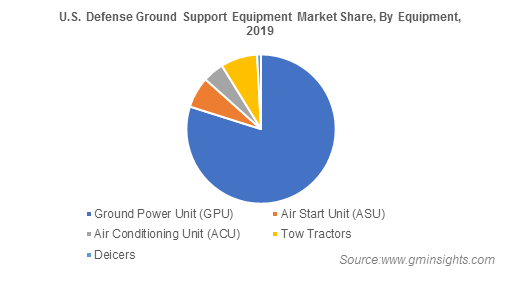 The rising defense expenditure in the U.S. is one of the major growth drivers for the defense ground support equipment market. The U.S. contributed more than 35% of the global military spending in 2018 and has the largest fleet size across the globe. The Ground Power Unit (GPU) is expected to have a market share of over 79% in 2019 due to increasing procurement of new & advanced combat aircraft and rising geopolitical tension.

In July 2019, Cummins Inc. received a contract from Robins Air Force Base for USD 8.4 million to provide BEAR Power Unit. The contract was signed for a 10-year term and under this agreement, the company will provide more than 100 units. The BEAR Power Unit is used as a prime power source for all the major air force expeditionary base. 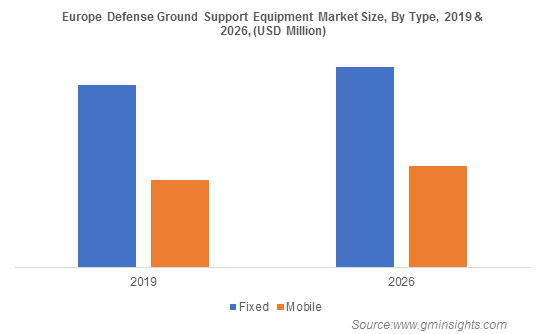 Advancement in technology and formation of various organizations for the development of next-generation aircraft are the major market accelerator for defense ground support equipment in Europe. For instance, in July 2018, the UK initiated a strategic alliance with Sweden, followed by the participation of Italy for the development of next-generation fighter jets under the Tempest combat aircraft program.

In June 2019, another alliance between Germany, France, and Spain was formulated termed as Future Combat Air System (FCAS) that was planned to be operational by 2040. Such initiatives taken by countries of Europe will improve the demand for highly customized mobile ground support equipment.

Fighter jet is expected to dominate the aircraft type in India with a CAGR of over 3%  through 2026. The increasing defense budget and rising geopolitical tension with neighboring countries including China and Pakistan are supporting market demand.

Increasing defense expenditure in the Middle East and Africa 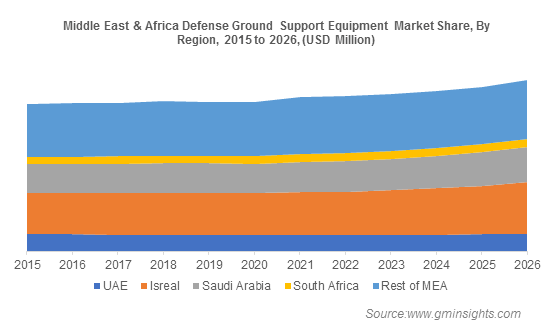 The rise in geopolitical tension within Gulf countries is promoting military expenditure, impacting the market value. Various government initiatives to strength the defense fleet and upgrades existing fleet are supporting the market growth. The demand for maintenance & support operation due to tough desert environment and urban condition fuels the demand for advanced support equipment. Countries including Saudi Arabia and the UAE are supporting the demand by increasing the defense budget.

For instance, Saudi Arabia remains the third largest military spender across the globe in the last decade (2009-18), whereas the UAE allocated USD 2.3 billion as its defense budget for 2019, which is USD 1.66 billion more compared to the previous year, witnessing a 41% rise in the defense budget. Significant defense expenditure and requirement of combat ready aircraft across Gulf countries will improve the defense ground supporting equipment market revenue within the coming years.

For instance, in September 2018, Boeing received a contract of USD 9.2 billion for providing 351 jets, 46 simulations along with service, ancillary supply & support equipment. Additionally, the company will also provide technical support for the development of ground-based components worth USD 813.39 million.

The defense ground support equipment market research report includes in-depth coverage of the industry with estimates & forecast in terms of revenue in USD from 2015 to 2026 for the following segments: