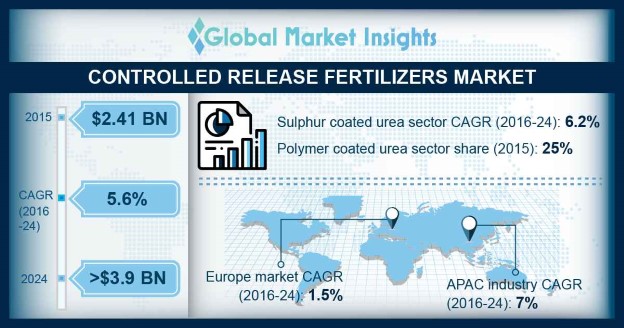 Increasing food and crops demand along with reducing per capita share of fertile land across the globe will escalate the demand for various controlled release fertilizers in upcoming years. The global population is witnessing a sharp increase reaching 7.38 billion in 2015 with a yearly growth rate of more than 1.15% since 2010.The high population growth coupled with a rapid pace of urbanization has significantly decreased the share of agricultural or arable land per person. According to study conducted by the Food and Agriculture Organization (FAO), of the per capita availability of arable land in the world dropped to around 0.2 hectares in 2013. There is a constant need to boost the agricultural productivity across the globe and this will gradually shift focus towards good quality fertilizers to improve the soil properties and increase the land productivity. This positive trend is anticipated to have a beneficial impact on the global controlled release fertilizers market.

Shortage of food crops and adverse climatic condition is shifting the focus of agriculturists and farmers towards the acceptance of sustainable agriculture. Total malnourished population was estimated at over 800 million in 2015, of which close to 75% belong to rural areas and are completely dependent on farming for livelihood. The demand for cereals used for both animal feed and food products are estimated to reach about 3 billion tons by 2050. This will boost the demand for long-lasting fertilizers to improve the fertility of the land and to enhance the crop yield influencing the overall controlled release fertilizers market revenue.

Low product awareness and abundance of substitutes such as urea will restrain the growth of product market over forecast timeframe. The controlled release fertilizers are costly due to special polymer coatings on the conventional fertilizer products which may also hinder the market growth rate. The products are not popularized in economically developing and under-developed countries due to the high costs. Also, farmers of these region are not aware of the benefits of the products owing to availability of low-cost conventional fertilizers.

Market size of polymer coated urea was estimated at more than USD 600 million in 2015, which accounted for over a quarter of the global controlled release fertilizers market share. These fertilizers improve the nitrogen absorption efficiency and reduce loss of nitrogen to the environment. Its ability to maintain the nutrient quality of the soil throughout the harvest season is going to boost the market growth. This segment will have a healthy growth at over 5% throughout the forecast timeframe.

Controlled release fertilizers are used for gardening & ornamental plants along with various cash crops, fruits and vegetables. Fruits and vegetable segment will show a robust CAGR of around 5.5% from 2016 to 2024 and generate revenue of about USD 300 million in 2015. This is owing to increasing health consciousness among the people is the reason for increasing consumption of fruits and nutritious vegetables across the globe.

Escalating lawn and garden consumable market in the developing countries of Asia Pacific will provide an opportunity for global controlled release fertilizers industry growth in the next few years. Enhancing lifestyle coupled with growing awareness about gardening and landscaping will act as a catalyst to the market growth. Hobby cultivators and gardeners will also enhance demand.

Asia Pacific accounted for almost half the overall controlled release fertilizers market share in 2015. This growth is on the account of huge agricultural land coupled with increasing awareness about sustainable cultivation to meet the growing food demand. Presence of several agro-based economies such as India, China, Thailand, Malaysia, and other tropical countries will be a major factor influencing the regional market. North America, driven by the U.S. agriculture industry, generated a revenue of around USD 850 million in 2015 and is likely to show a substantial growth rate over the forecast span.

Strategic partnerships between companies such as Compo and BASF characterize the controlled release fibers market competitive landscape. Companies are also developing software and user friendly applications to improve the crop yield, while maintaining their market positions. Haifa Chemicals, for instance, has introduced Haifa FloraMatch, NutriNet, FoliMatch, and various other software packages in order to provide an educational forum to farmers across the world giving them advices to promote the crop health.

Controlled release fertilizers are used for gradual release of nutrients into the soil. In these products the fertilizers granules are encapsulated in coatings of sulfur or polymers. Reducing availability of arable land and constant increase in food demand will escalate the demand of the product. With increasing demand for better land productivity, many farmers and agriculturists are gradually shifting their focus towards these eco-friendly fertilizers.

North America has significant demand of the product as it is one of the major producers of various cash crops such as wheat, maize, etc. High product awareness and usage of improved farming methodologies in region makes it suitable for the high product demand. Though high priced, the market growth is expected to be characterized by higher product efficiency.