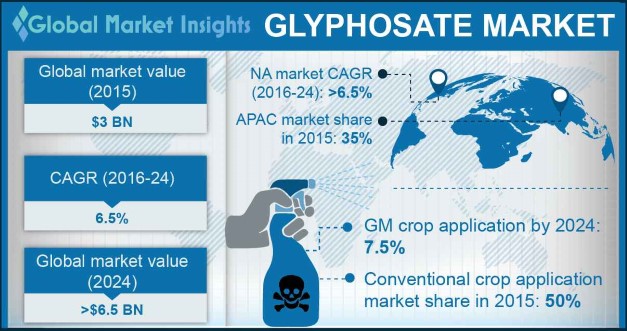 Strong application in the agriculture sector as an active herbicide agent is likely to propel the glyphosate market growth over the projected timeframe. It is used to prevent the growth of unwanted broadleaf weed, thus augmenting the agricultural production. Further, it aids in stimulating plant growth & supports ripening of certain crops such as cotton, canola, soybean, berry crops, and corn. The product is highly effective in managing of noxious and invasive weeds. Additional functionalities & applications in integrated pest management is generating new growth avenues for industry participants. Moreover, glyphosate availability and usage in various formulation such as ready-to-use liquid, liquid concentrate, and solid form will drive the product adoption.

Growing global food demand along with reducing per arable land area has enhanced the need for developing innovative farming practices that will aid in increasing yield per hector. Application of glyphosate in facilitating yield growth is further expected to propel overall industry share. Further, strong development in the global herbicide industry supported by favorable trade policies will support the industry growth up to 2024. Favorable policies pertaining to the use of herbicides in agricultural practices by various agencies including EPA and FAO will further accentuate overall market growth.

Several concerns and perception regarding carcinogenic nature of crops treated with glyphosate is likely to create hindrance for market growth. However, recent studies by the U.S. Environmental Protection Agency (EPA) found that glyphosate is a safe herbicide for agriculture use if used within the permissible limit. Also, in August 2016, New Zealand EPA published a report stating glyphosate is unlikely to be carcinogenic.

GM crop application is anticipated to witness significant gains over 7.5% by 2024. Increasing consumer awareness relating to advantages of genetically modified crops accompanied by negligible effect of the product on plant will escalate the product demand. Large share of genetically engineered crops is developed to be herbicide resistant to glyphosate so that herbicide is used to kill only weeds around the crop. According to the Canadian Biotechnology Action Network (CBAN), around 88% of the global GM crops are tolerant to herbicide growing at around 400 million acres of land. 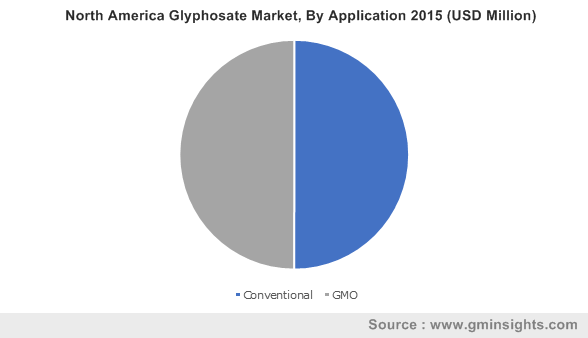 Conventional crop application dominated the global glyphosate market, accounting for over 50% share in 2015. Necessity to increase the agricultural output has augmented the use of glyphosate for crops such as citrus, cereal grains, orchards, legume vegetable and oilseed crops. As per FAO, the global population is projected to cross 9.1 billion people by 2050, requiring 70% growth in overall food production between 2007 and 2050. High cost effectiveness along with rising awareness on varied functionalities of the product to support yield growth for conventional crops is further expected to create long-term positive impact.

North America is expected to witness growth of more than 6.5% by 2024. Strong agricultural support programs by various agencies including FAO, and EPA to address growing concerns and consumer perception on environment and health effects of glyphosates is anticipated to fuel market growth for the projected timeframe. Also, presence of large multinational players involved in production of genetically modified crops will further aid in market expansion. The U.S. holds around 40% of the global biotech crops production area in 2017 and is anticipated to dominate the global production owing to high regional spending on research & development. 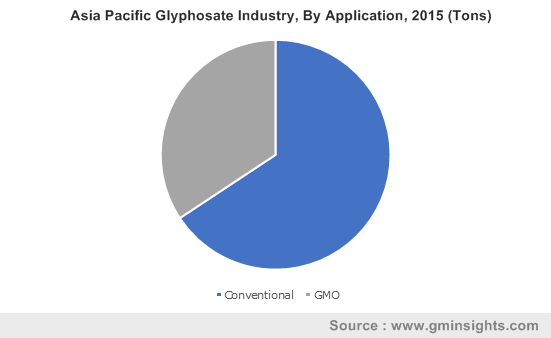 Asia Pacific accounted for over 35% market share by volume in 2015. China and India are among the leading agricultural nations and hold a substantial share in the regional glyphosate market. Robust growth in the regional GM crops production supported by government policies will drive the regional share over the forecast timeframe. For instance, India’s agricultural area for biotech crops increased from 10.8 million hectares in 2016 to 11.4 million hectares in 2017. Also, South Korea government has introduced national program for developing biotech crops. Moreover, considerable population growth supported by economic development has fuelled the demand for food & beverage products, creating a necessity to improve the regional agricultural productivity.

The global herbicide market is projected to grow at over 5% annually up to 2024. Reducing arable land area coupled with necessity to improve the economic viability of agricultural fields is fuelling the adoption of herbicides. Glyphosate holds a substantial share in the global herbicides industry owing to high production rates and usage in various crop protection products. The market is driven by growing demand from agriculture sector. Favourable government policies and growing investment by private sector will support the industry expansion. Increasing necessity to increase yield per hector to tackle growing food demand generated due to rising population will further support market advancement for coming years.

In 2024, the Glyphosate Market registered a remuneration of USD 850 million.
As per estimates, Glyphosate Market would record a revenue share of USD 850 million in 2024.
Growing demand for the product as an herbicide agent in agriculture sector is a major factor fueling worldwide share.
Conventional crop led the global application landscape in 2015 with approximately 50% share. The rising need to enhance the agricultural output will drive the segment growth.
According to a report by GMI, North American market is expected to witness a y-o-y growth of 6.5% over 2016-2024. Presence of renowned industry players coupled with expanding agriculture sector will drive the regional trends.
Customize this Report
Inquiry Before Buying