Condom Market size exceeded USD 8.4 billion in 2020 and is predicted to witness over 9.9% CAGR from 2021 to 2027. Increasing prevalence of sexually transmitted diseases worldwide, rising awareness about the use of condom through sex educational programs are some of the factors that foster the market growth. Similarly, surging adoption of contraceptives to avoid unwanted pregnancy coupled with increasing usage of online distribution channels will further propel the market progression. 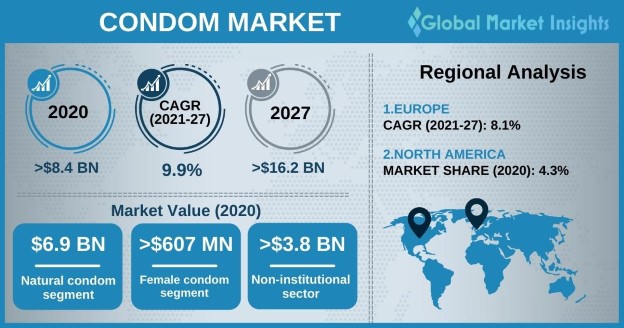 The impact of COVID-19 on the industry was substantial. The market observed a short-term disruption during the initial days of the COVID-19 pandemic due to supply chain disruptions. Later, the condom business registered lucrative growth and the trend will continue to rise in the coming years.

Government in various countries are introducing different campaigns and comprehensive sex educational programs to improve awareness among youth and encourage them to use contraceptives in order to combat STDs and prevent unwanted pregnancies. In India, the Ministry of Health and Family Welfare procures condoms that are distributed by NACO/SACS to high-risk groups (HRGs) via TI NGOs/ICTC/ART centres for HIV/AIDS prevention. Similarly, in June 2020, the Bihar government started distributing condoms to migrant labourers to prevent unwanted pregnancies. Whereas, in African countries, the National Department of Health (NDOH) is working to ensure that male condoms are readily available in all communities throughout the region.

The natural condom segment was valued at around USD 6.9 billion in 2020, owing to superior strength of natural variant and cost effectiveness compared to synthetic. Latex variant is more flexible and durable and are broadly available in a variety of sizes, shapes, flavours, textures, and colours under several brands.

Increasing demand for female condom will spur the market demand 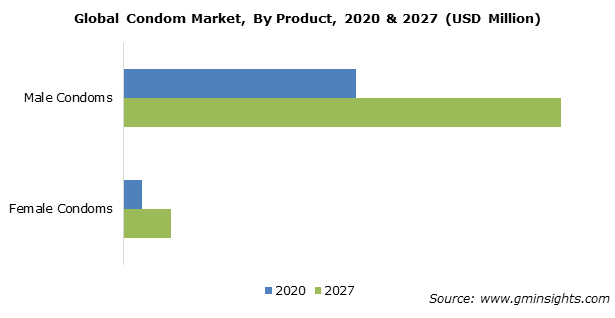 Institutional sectors are expected to showcase 9% growth rate through 2027.  Institutional segment involves, purchasing from the government, non-government, and other private and public groups with the aim of distributing condom at a reduced/no cost. Institutional purchase is substantially higher in emerging economies including APAC and Africa that secures the segment progression.

Online platform segment accounted for around USD 731 million in 2020 impelled by the increasing consumer preference towards online purchasing as well as freedom to choose on e-commerce platforms. Market players such as Reckitt Benckiser and Church & Dwight are focusing mostly on online marketing approaches to promote their condom brand, thus reflecting the potential and importance of online purchasing. Furthermore, digital literacy and rising internet access in emerging countries will fuel the segment revenue during the forecast timeline.

North America condom market held 4.3% of revenue share in 2020 due to the growing prevalence of HIV along with rising demand for female condoms in the U.S. According to the CDC, in 2020, nearly 1.2 million people were suffering from HIV, therefore the government has undertaken numerous initiatives to prevent HIV in the U.S. In addition, presence of major market player in this region coupled with increasing product launches is set to influence the regional growth.

The condom market research report includes an in-depth coverage of the industry with estimates & forecast in terms of revenue in USD from 2016 to 2027, for the following segments:

Condom market size had exceeded USD 8.4 billion in 2020 and will witness over 9.9% CAGR through 2027 with rising prevalence of sexually transmitted diseases and the growing awareness about the use of condom through sex educational programs.
Online platform segment had accounted for around USD 731 million in 2020 on account of increasing consumer preference for online purchasing and freedom to choose on e-commerce platforms.
Female condom segment had recorded a valuation of over USD 607 million in 2020 owing to the rising need to avoid unintended pregnancy coupled with the growing awareness about women’s sexual rights.
North America condom market had held 4.3% of revenue share in 2020 owing to the rising prevalence of HIV along with rising demand for female condoms in the region.
FUJILATEX, Church & Dwight, Reckitt Benckiser Group, Okamoto Industries, Veru, Mayer, Karex Berhad, Mankind Pharma, Cupid Limited, etc. are the major companies operating in condom market.
Customize this Report
Inquiry Before Buying