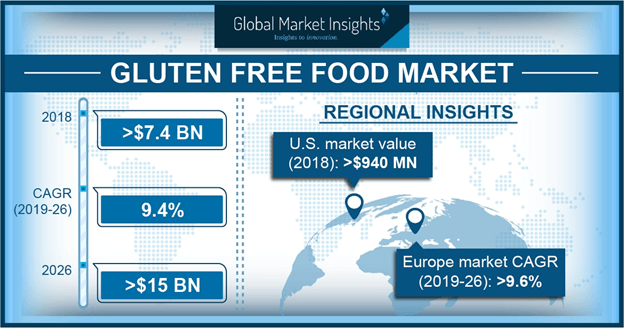 Coenzyme Q10 occurs as a natural antioxidant produced by the body primarily in liver, kidney, heart and pancreas. It is a vitamin like substance which protects cells from damage and improves body metabolism.  The substance is commonly used in dietary & nutritional supplements to provide solutions for blood sugar regulation, aching joints & muscles and other health related problems. The product also helps in reducing sun damage, prevents the risk of skin cancer and enhances antioxidant protection.

According to the National Center for Complementary and Integrative Health, consumption of coenzyme Q10 significantly lowers the risk of heart failure. Diseases such as mitochondrial diseases, cancer and muscular diseases are associated with reduced levels of CoQ10 in body. Recommended amount of coenzyme Q10 is 90-200 mg per day, as balanced supplementation of the product reduces inflammation & boosts overall individual performance. It also improves energy production and inhibits cell damage in human body.

Several pharmaceutical companies are focusing on improving their medicinal formulations and are utilizing coenzyme Q10 as a primary ingredient pertaining to its superior antioxidant properties such as ability to protect tissues, strengthen immune system and support cardiovascular function has provided substantial market opportunities to the suppliers operating across the industry.

According to the World Health Organization, deaths caused by liver cancer amounted over 780 thousand while deaths by lung cancer valued over 1.5 million in 2018. A major factor contributing to industry growth includes improved consumption of CoQ10 in the diet as it reduces oxidative damage in lungs, limiting the chances of lung cancer. Increasing government initiatives to promote healthcare facilities has urged manufacturers to incorporate medicinal formulations with essential vitamins and nutrients for optimal health which is expected to anticipate in the market growth.

The affirmations provided by EFSA under the article 13 of regulation (EC) no 1924/2006 addresses substantiation of health claims for coenzyme Q10 and its contribution in providing energy metabolism, maintaining normal blood pressure, and support to cognitive function. The data presented by EFSA panel concludes that the food constituent, Coenzyme Q10 which is subjected of health claims is sufficiently characterized. 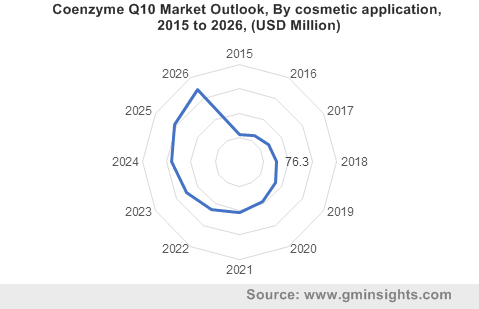 Based on application, the coenzyme Q10 market is segmented into pharmaceuticals, cosmetics and dietary supplements. Inclusion of coenzyme Q10 in cosmetic formulations diminishes free radicals in skin and substantially reduce the stress of various external factors such as pollution and sun damage, which shows favorable opportunities for Coenzyme Q10 industry demad.

The product prevents adverse effects associated with UV exposure and is useful in treating ageing related skin changes. Rising innovations in manufacture of cosmetics to achieve skin friendly products is on rise. This has urged manufacturers to replace synthetic additives with natural ingredients which will drive the market growth. 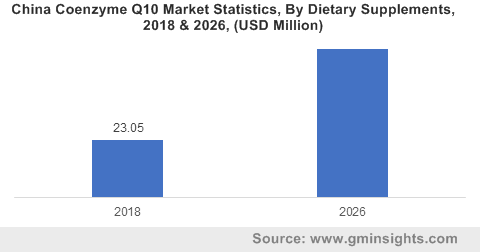 The study on Coenzyme Q10 is conducted across North America, Europe, Asia Pacific, Latin America, and Middle East & Africa. China market demand from CoQ10 based dietary supplement applications is expected to record gains of about 8% by 2026. Rising health issues owing to changing lifestyle patterns in the region has significantly shifted consumer preference towards a healthy lifestyle. Favourable acceptance of dietary supplements to improve overall health of an individual has shifted manufacturer’s preference towards natural ingredients in supplement formulations which may favour regional market outlook.

In June 2016, Doctor’s Best was acquired by Xiamen Kingdomway Group Co. This acquisition will promote the use of coenzyme Q10 since Kingdomway is engaged in the manufacturing CoQ10 and Doctor’s Best is a leading internet seller. Furthermore, In July 2018, the company announced the release of its new CoQ10/Magnesium for sports nutrition enthusiasts. These products are naturally fermented and much easier on digestive tract which shall improve company’s market shares.

In November 2017, Kaneka Corporation partnered with Shenzhou Biology and Technology Co., Ltd to develop arrangements for the supply of Shenzhou’s Q10 in North America. The agreement will enhance company’s share of oxidized coenzyme Q10 in North America and expand Ubiquinol in China. This partnership will help enhance coQ10 reach in new locations as Shenzhou will distribute Kaneka’s Ubiquinol products in China.

The coenzyme Q10 market research report includes in-depth coverage of the industry, with estimates & forecast in terms of volume in Tons revenue in USD from 2015 to 2026, for the following segments:

Coenzyme Q10 occurs as a natural antioxidant produced by the body primarily in liver, kidney, heart and pancreas. It is a vitamin like substance which protects cells from damage and improves body metabolism.
Pharmaceuticals, dietary supplements and cosmetics are the major segments of the industry.
The growing adoption of natural cosmetic products in North America is driving the industry expansion.