Global Dietary Fibers Market size was valued at over USD 5 billion in 2018 and is anticipated to witness over 10% CAGR up to 2025. 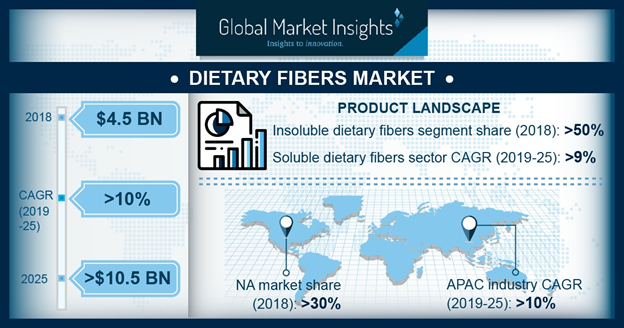 Increasing demand for dietary fibers across end-use industries such as food & beverages, pharmaceuticals & nutritional supplements, and animal companion nutrition is steering market growth. Rising consumer awareness towards maintaining a healthy diet and its impact on lifestyle will support industry demand. This has resulted in a significant demand for the product owing to increased alertness about the key benefits to prevent and control the lifestyle diseases such as diabetes, hypertension, cardiovascular diseases among others.

In developed economies, consumers have started keeping an eye on dietary recommendations, resulting in a shift towards proactive healthcare and lifestyle. Factors such as increasing prevalence of gastrointestinal diseases coupled with rising consumer spending on personal care products will provide a positive scope for the product penetration during the forecasted timeframe. Also, growing consumer preferences toward vegan & vegetarian food products instead of meat items owing to the higher nutritional value will further provide a strong business outlook. Additionally, increasing consumer focus to maintain fitness and regulate body weight has enhanced the product demand from the supplements industry. Rise in the consumer preference towards energy and sports drinks having nutritional benefits will further boost the product demand. Rising popularity of fortified & functional food products in the developing countries including India, South Africa, Brazil etc. owing to rising disposable income will further contribute to the market expansion.

Government agencies such as USFDA, USDA, EC, etc., that promote the intake of the product in daily nutrition will augment business growth. They have undertaken awareness campaigns to bring due attention on the need for maintaining a balanced regime owing to diseases related to nutrition deficiency. For instance, as per a USDA study on food habits, it was found that a substantial portion of the populace had nutrient intake below the recommended levels.

Insoluble dietary fibers dominated the market share and accounted for over 50% of the overall demand in 2018. Insoluble dietary fibers consist of carbonates that are crucial for the optimal metabolism rate in a human body. Changing consumer food preferences toward high fiber foods such as legumes & grains coupled with growing prevalence of health disorders among the geriatric population will contribute to the increase in the product demand. Increasing demand for biodegradable cellulose product owing to a rising level of global warming in the environment will propel the industry expansion.

Soluble dietary fibers product segment witness significant gains over 9% by 2025. Shifting consumer preferences toward the sugar substitutes to protect themselves from blood pressure, overweightness, and other health ailments will steer the product demand up to 2025. Additionally, growing applications of the product in the food and beverage sector coupled with favourable functional properties of the product will further contribute to the industry expansion. Furthermore, factors such as the rising demand for organic & natural ingredients coupled with shifting consumer focus toward functional foods will bolster the product demand over the forecast time period

Fruits & vegetables segment accounted for more than 35% of the total industry share in 2018. Cabbage, broccoli, berries, apples, and pear offer a high amount of dietary fibers. Growing instances of lifestyle diseases such as colon cancer, and first stroke rate have augmented the utilization of fruits and vegetables as a prominent source thereby contributing to the business expansion. Some contents present in fruits also assist the good bacteria in the stomach to produce protective substances such as short-chain fatty acids, thereby promoting gut health and preventing bowel syndrome.

Cereals & grains segment is projected to witness over 9% gains from 2019 to 2025. Cereals and grains emerge as major sources of cellulose, lignin, and hemicelluloses. Ease of availability and the minimal efforts involved in extracting the soluble and insoluble fibers from these sources have aided their prospects in the market. Increasing consumption of cereals and grains owing to several benefits coupled with improved health assistances provided including lowering risk of heart diseases and reduction of type 2 diabetes risk will propel industry growth.

Beverages segment will surpass 150 Kilo Tons by 2025. Growing usage of dietary fiber in beverages such as sports drinks, protein drinks, tea, coffee, and carbonated drinks etc. coupled with advantages including reduced bitterness of emulsifiers and improved mouthfeel will lead to increase in product adoption. Additionally, strong growth in the beverages sector, particularly in emerging economies along with increasing health consciousness will proliferate product penetration over the forecast timeframe.

Food segment is projected to witness over 9% gains from 2019 to 2025. Robust demand for breakfast cereals in Asia Pacific owing to evolving nutritional patterns coupled with favourable government initiatives to improve the nutrition intake among people in the developed nations is driving dietary fibers market growth. Significant positive health effects such as the protection from CVDs and heart attack will propel the product adoption in food applications. Further, stringent regulations & changing labelling norms supported by recommendations from government organizations to improve the daily product intake will fuel industry share.

North America accounted for more than 30% of the overall Dietary Fibers demand in 2018. Growing prevalence of health-related diseases including obesity and cardiac arrest among young and geriatric population coupled with increasing consumer spending on premium & nutritious food products in the region will steer the product demand up to 2025. For instance, as per the International Diabetes Federation (IDF), over 45.5 million adults aged between 20-29 years were affected with diabetes in the North America and Caribbean region in 2017 and is expected to increase by more than one third by 2030.

Asia Pacific will witness the fastest growth with a CAGR at 10% in the dietary fibers market by 2025. Rising disposable income, increasing consumer expenditure level, and changing living standards due to rapid urbanization in major metropolitan cities will augment the overall industry growth. Increase in geriatric population in the region that are seeking for food products containing high fiber amount to prevent and control diseases will further enhance business expansion.

Dietary fibers also known as roughage is the indigestible portion of food products derived from plants, including soluble and insoluble dietary fibers. Rising consumer awareness towards healthy living standards coupled with growing prevalence of health disorders including obesity, cholesterol, and other cardiovascular ailments is anticipated to increase the demand for the product in the overall industry growth. Developing economies such as India, Mexico and Brazil will substantially impact the product development owing to large customer base coupled with changing consumer food preferences toward high fiber foods such as legumes & grains.