Cardiac Resynchronization Therapy (CRT) Devices Market size valued at USD 2 Billion in 2019 and is estimated to exhibit CAGR of around 5.5% from 2020 to 2026. 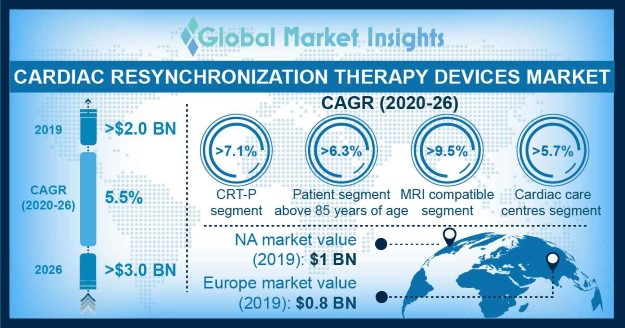 The CRT devices assist in controlling irregular heartbeat and help increase the efficiency of heart beats. Heart failure is a condition characterized by inefficiency of the cardiac muscle to circulate oxygen and nutrients throughout the body. The two ventricles of the heart contract simultaneously to pump blood, in a healthy heart. Patients with heart failures or arrhythmias require a cardiac resynchronization therapy device for this function.

A CRT device consists of a pulse generator and leads. The leads are placed into the heart muscle to deliver electrical impulses produced by the generator. This helps in coordinated contraction of the ventricles, restoring normal function of the cardiac muscle. Cardiac resynchronization devices are of two types, CRT devices pacemakers and cardiac resynchronization therapy devices defibrillators. A growing incidence of cardiac disorders across the globe will boost the market value.

A global surge in cardiovascular disorders will increase the product demand

Cardiovascular diseases have been rising across the globe due to lifestyle factors such as a sedentary lifestyle. Furthermore, preference for junk food, smoking and unhealthy consumption of alcohol will lead to a rise in the patient pool. The growing patient pool has increased the number of CRT device implantations.

For instance, the American Heart Association estimates around 90,000 CRT devices procedures in the U.S. in 2018. Thus, a rising prevalence of heart failure and arrhythmias will drive the CRT devices market expansion.

The high cost of cardiac resynchronization therapy devices might be a market limiting factor in the short run. Furthermore, limited reimbursement in the developing nations and a stringent regulatory scenario will impede the industry expansion.

Growing geriatric population will boost the demand for CRT-D devices

The cardiac resynchronization therapy devices defibrillators segment held a market value of around USD 1.7 billion in 2019 and will witness lucrative growth in the coming years . A CRT devices defibrillators device is used to address risks of sudden cardiac death in patients. The device functions as a normal pacemaker and can treat arrhythmias that lead to cardiac arrest. Hence, above-mentioned factors will enhance the market revenue.

A growing geriatric population coupled with extended lifespan will boost the market demand. According to the World Health Organization, number of people aged 60 or older is expected to double by 2050. Geriatric individuals are at a high risk for sudden cardiac death; thus, an increasing geriatric population will augment the CRT devices market growth.

The MRI compatible segment will expand at 9.5% through 2026. Growing technological advancements and ease of undergoing an MRI scan will boost the segment growth.

The 45-64 year patient segment will account for nearly 24% of the market share in 2019 and will exhibit substantial growth throughout the forecast timeframe. According to the National Centre for Biotechnology Information (NCBI), cardiac resynchronization therapy devices use in older adults is rising significantly. Growing stress, smoking and alcohol consumption among the late middle-aged population has contributed to this increase. 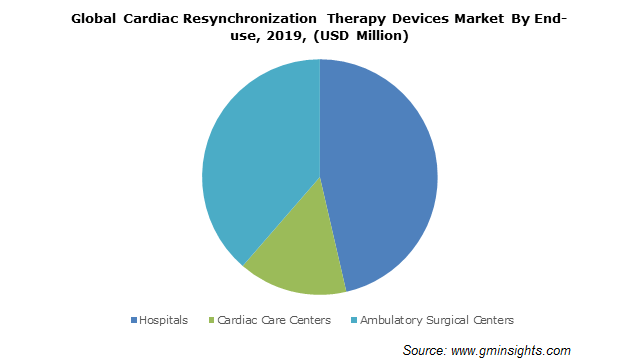 Europe CRT devices market held a market value of around USD 800 million in 2019 and will witness steady growth during the forecast period. The growth can be attributed to growing obesity and rising incidence of cardiovascular diseases in the Europe region. A growing sedentary lifestyle has led to a rise in obesity and the arising cardiac disorders will result in boosting the patient pool. Furthermore, presence of key market players and the high rate of technology adoption in the market will boost the regional industry growth.

UK will lead the Europe market with a 6.4% growth till 2026. The growth can be attributed to high prevalence of obesity in the country. According to the National Health Society (NHS), nearly 30% of adults in the UK were classified as obese in 2018. Furthermore, this was an increase of 26% from 2017. A growing number of obese individuals will boost the incidence of cardiovascular diseases.

The cardiac resynchronization therapy devices market research report includes an in-depth coverage of the industry with estimates & forecast in terms of revenue in USD and volume in terms of Units from 2015 to 2026, for the following segments:

The above information is provided for the following geographies:

The market size of CRT devices valued at USD 2 Billion in 2019.
The industry share of CRT devices is estimated to exhibit CAGR of around 5.5% from 2020 to 2026.
Customize this Report
Inquiry Before Buying