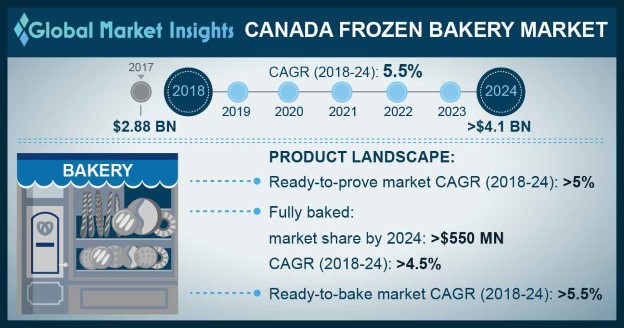 Development of retail and multi-chain outlets in Canada is a key driving factor for the frozen bakery market. Independent and small-scale retailers are the pillars of the Canadian food economy. These small chain and multichain retailers account for approximately 90% of the country’s market share and also contribute to about 30% of the nation’s gross domestic product. With increasing number of small-scale retailers, multi-chain retail is also increasing as the country’s economy is attempting to adopt and evolve according to the changing global trends. These factors will propel the Canada frozen bakery market in the coming few years.

To maintain low temperatures as per the commercial standards of food preservation, a lot of energy is required. It also requires special packaging of frozen products such as fold-up boxes that keeps the packaging and the product intact. Moreover, energy efficiency of the equipment used for storage will also result in the cost fluctuations. High energy cost and fluctuation in energy prices are said to be the restraining factors for the frozen bakery market growth in Canada.

Increasing demand for savory snacks are said to drive the Canada frozen bakery market demand in the forecast years. Bread accounted for over 70% of the overall industry share followed by viennoiseries. On the basis of revenue, the viennoiseries segment accounted for over USD 400 million in 2017 and is said to grow at the second highest CAGR in the forecast period. Patisseries segment is said to grow at a relatively slower rate than bread owing to huge demand for bread as compared to the pastries.

On the basis of product, the Canada frozen bakery market is segmented into ready-to-prove, ready-to-bake, and fully baked products. Uncooked dough that needs fermentation and baking time of approximately 12 hours is included in this segment. This segment is said to grow at the second highest CAGR in the forecast timespan.

Ready-to-bake is the major segment with the highest market share in terms of volume. The segment is said to witness the fastest growth with a CAGR of over 5.5%. The fully baked segment is said to surpass USD 400 million owing to its high demand among hotel chains, quick service restaurants and cafes.

Grupo Bimbo, one of the market leader has recently in October 2017 Grupo Bimbo, acquired the East Balt Bakeries, a company that dealt in bakery products. The company had gained a fair share of revenue and expanded its production capacity by taking over East Balt’s 2,200 experienced working professionals and 21 baking plants located in 11 countries across the globe.

The Canada frozen bakery market is majorly driven by its end-user industries. Changing tastes and eating preferences of consumers due to hectic lifestyles has led to increasing quick serve and ready-to-eat food selling restaurants and cafes. Time-pressured consumers are left with no choice but to manage their working lifestyle with such food that takes minimum time for cooking. Developed corporate lifestyles and eating habits of consumers is said to boost the Canada frozen bakery market.