Biopolymer Films Market size was registered at about USD 4 billion in 2021 and is anticipated to showcase considerable growth at a CAGR of 8.4% from 2022 to 2028 owing to the growing demand for bio-based packaging solutions. Favouring government regulations on the use of bio-based polymers over synthetic ones has been positively influencing the global market share in recent years. 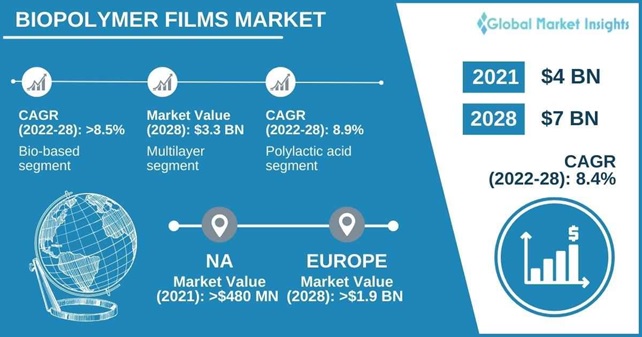 For instance, the U.S. FDA has formulated directives for using biopolymer films in food packaging applications, particularly due to zero toxicity associated with these films. For instance, PLA and cellulose films are chiefly used in food wrapping applications.

Food packaging has been prominent in North America and Europe, creating widespread product applications in these regions. In addition, improving socio-economic factors in the Asia Pacific along with the increasing working population in the region, particularly India, will be a key factor driving product demand over the forecast timeframe.

The opening of various food joints, such as Burger King, Subway, etc., in the Asia Pacific will stimulate biopolymer film demand in food packaging applications. Additionally, growing consumer awareness across the globe, in terms of environmental protection and reducing harmful solid waste (synthetic plastics), will complement the global biopolymers films market share by 2028.

Other key factors propelling the industry growth include robust growth across pharmaceutical, home & personal care, etc. However, the growth will be hindered by comparatively uncompetitive product features compared to synthetic films such as PE & PP films.

High product costs compared to synthetic and semi-synthetic films are likely to impede the biopolymer films market in the coming years. Biopolymer films are three to four times more expensive than polyethylene films, which is attributed to their low production volume. A relatively low vapor barrier and mechanical properties of the product may hamper the market during the forecast period. However, technological advancements have led to the development of multilayer films and atomic layer deposition, which are likely to generate plentiful opportunities for the market in the coming years. 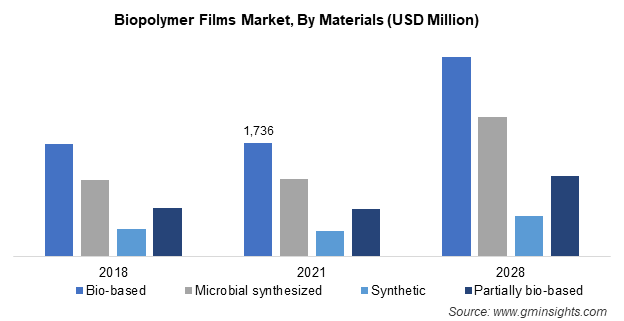 Based on the bio-based segment, the market was valued at over 1.7 billion in 2021 and is projected to grow at a CAGR of over 8.5% by 2028. Growth in the food & beverage industry along with an increasing demand for organic & renewably sourced packaging products for prolonged preservation has driven the bio-based biopolymer films market in recent years. The abundant availability of bio-based materials including starch, chitosan, protein, and cellulose will likely propel the biopolymer films market value over the forecast spell. 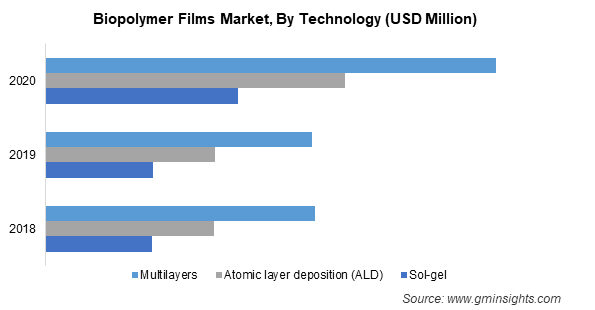 The multilayer segment is expected to generate around $3.3 billion in revenues by 2028. The multilayer process is a widely utilized technique in the biopolymer films market for the coating of various materials as it offers multilayer films to the final product, thus enhancing the water vapor barrier and maintaining product stability. This type of film is widely used as a packaging material for low or dry moisture content edible products.

The polylactic acid segment will witness a CAGR of 8.9% during the forecast period. PLA is a biodegradable aliphatic thermoplastic polyester that is primarily obtained via renewable resources and highlights compostable & thermoplastic properties. PLA also showcases thermal, mechanical, and barrier properties when compared to the other types of synthetic polymers such as polystyrene and ethylene terephthalate. This type of film is primarily found in applications such as compost bags, disposable tableware, loose-fill packaging, disposable tableware, etc.

The food & beverage segment will continue to drive the market growth

The food & beverage segment will witness a CAGR of over 8.5% through 2028. Biopolymer films are increasingly used to protect frozen poultry and are also incorporated into gelatine coatings to slow down the development of oxidative rancidity in poultry meat before it is sent to freezing. Biopolymer films have various functions, such as texture modifier & oxygen barrier, and act as a moisture barrier. This film also acts as an antimicrobial & antioxidant carrier. The growing food & beverage industry, primarily in the emerging economies, will have a positive impact on the biopolymer films market revenue during the forecast period. 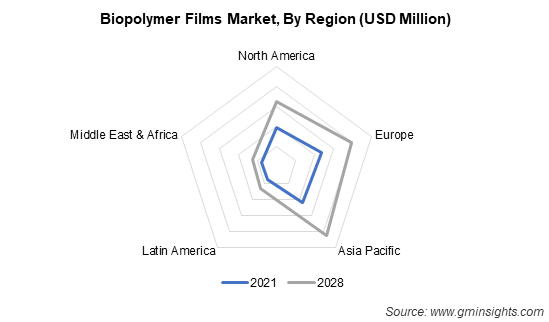 The Europe biopolymer films market is expected to reach over USD 1.9 billion by 2028. The UK has consistently been a significant producer of biopolymers in recent years. The abundant availability of raw materials coupled with consistent technological innovations by significant market players in the region, such as Mondi, BASF SE, and Evonik Industries AG, will drive the market. Supportive government norms for safer food packaging, such as EN 13432, EN 14045, and others, will also boost the regional market during the forecast period.

The biopolymer films industry players are primarily focused on enhancing their strategic partnerships to capture new markets and drive their revenue generation. Various industry participants that are associated with the biopolymer films market are working on developing new products, forming mergers & acquisitions, and increasing their research & development activities to strengthen their market presence.

The biopolymer films market report includes in-depth coverage of the industry with estimates & forecast in terms of volume in kilo tons and revenue in USD million from 2022 to 2028 for the following segments:

Biopolymer films market share was around USD 4 billion in 2021 and could grow at 8.4% CAGR over 2022-2028 driven by rising demand for bio-based packaging solutions.
The overall market revenue from multilayer technology is anticipated to reach about $3.3 billion through 2028 due to its ability to offer multilayer films to the product, further improving the water vapor barrier and maintaining stability of the product.
The biopolymer films market size from PLA could grow at 8.9% CAGR by 2028 as it highlights compostable & thermoplastic properties and is obtained from renewable resources.
Europe biopolymer films industry share could surpass USD 1.9 billion by 2028 driven by constant technological innovations and availability of raw materials.
Customize this Report
Inquiry Before Buying