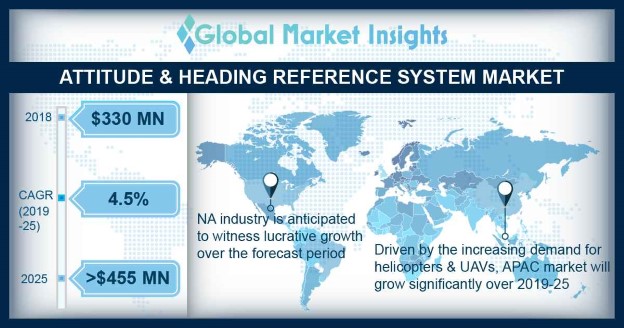 Growing importance of precision navigation, sensitivity, and reliability in the general aviation industry is driving the attitude and heading reference system (AHRS) market growth. AHRS is widely used in business jets, turboprops, and piston-powered aircraft due to its small form factor, low weight, and self-correcting capability. Owing to its compact size, AHRS easily fits in the Electronic Flight Instrument System (EFIS) in the cockpit, thus reducing the overall weight of the aircraft. In addition, AHRS combined with external sources such as GPS and air data computer had significantly expanded its range of applications in military and Unmanned Aerial Vehicle (UAV) sector.

Lower accuracy of the system owing to increasing sensor noise and drift may restrict the attitude and heading reference system market growth over the study timeframe. Additionally, interferences caused to the accelerometers owing to vibration and other factors including gravity, noise, and other external forces may further limit the business reach till 2025. However, industry players are introducing innovative light weight and improved reliable solutions for developing such systems. 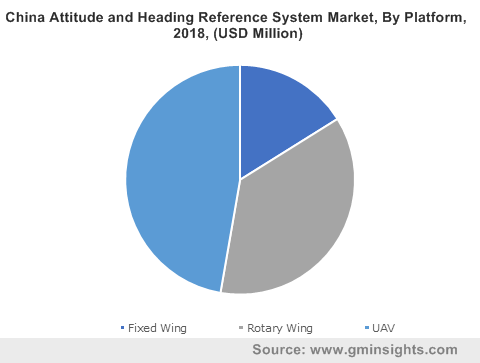 The UAV attitude and heading reference system will hold a significant revenue share over the forecast timeframe. Increasing adoption of UAVs in defense owing to the compact size and ability to operate across multiple ranges is boosting the segment growth over the projected timeframe. Moreover, the ability of these UAVs to fly into zones, that are hazardous for pilots are further supporting the segment growth till 2025.

The ADAHRS attitude and heading reference system market will grow significantly over the study timeframe. ADAHRS provide additional information to pilot such as airspeed, altitude, Mach number and outside air temperature. The segment is witnessing high adoption in the fixed-wing military and rotary aircraft which will support the market growth over the forecast period. For instance, in February 2017, Archangel Systems’ AHR150A ADAHRS was selected by Bell Helicopter V-280 Valor tiltrotor military program for the U.S. Army.

The GPS AHRS is witnessing high adoption owing to increasing usage of these systems for navigational and positioning capabilities. Industry players are launching advanced systems to provide a wide range of solutions with improved accuracy and positioning, supporting the attitude and heading reference system (AHRS) market growth over the forecast timeframe. For instance, in October 2019, Sparton launched an inertial navigation system with the integration of SAASM GPS. The system consists of low power INS that provides accurate navigation including attitude, longitude, pitch, and velocity.

The gyroscope component segment holds a major share in the AHRS market. It is an essential component of AHRS that provide stable angular rate measurements. Moreover, advancements in technologies including the introduction of the optic gyroscope and ring laser systems will play an important role in the industry expansion over the projected timeframe.

Accelerometer will account for a significant share in the attitude and heading reference system market place owing to its requirement for providing advanced initial attitude reference along with the provision for attitude corrections during a flight journey. Moreover, advancements in accelerometers with higher quality and low power ASIC for felicitating signal conditioning will further support the revenue generation until 2025. 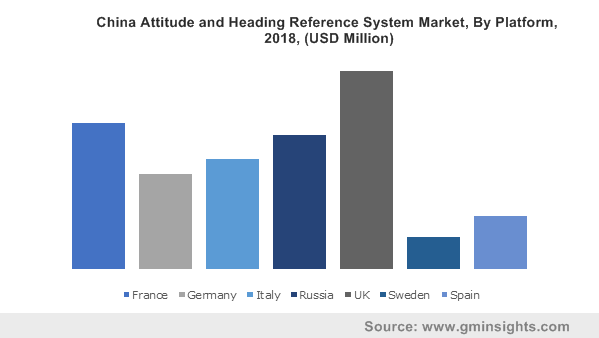 North America attitude and heading reference system market place will account for a major share till 2025. This dominance is credited to the concentration of aircraft manufacturers across the region including Boeing, General Atomics, and Lockheed Martin. Additionally, rising demand for UAV and increasing contracts from the military and defense forces is further strengthening the industry share until 2025. For instance, in September 2018, the U.S. Army awarded a contract worth USD 454 million for supplying WESCAM MX-10D along with the modernization of Shadow RQ-7B UAV fleet, thereby positively influencing the market growth till 2025.

Asia Pacific attitude and heading reference system market share is expected to witness significant gains owing to the increasing demand for helicopters and UAVs. Additionally, the increasing defense and military budgets coupled with stringent government regulations for regulating the flight systems are further expanding the market share over the study timeframe.

The market size of attitude and heading reference system was valued at over USD 330 million in 2018.
The industry share of attitude and heading reference system is estimated to exhibit around 4.5% CAGR from 2019 to 2025.
AHRS, when combined with systems like GPS and air data computer, can significantly expand the range of Unmanned Aerial Vehicle (UAV).
Strong presence of OEMs such as Lockheed Martin, Boeing, and Northrop Grumman and rising demand for military UAVs and business aircraft is making North America a lucrative avenue for AHRS manufacturers.
Asia Pacific industry is recording considerable growth rate on account of increasing demand for helicopters and UAVs.
Companies such as Northrop Grumman Corp., Sparton Navigation and Exploration, MEMSic Inc., Universal Avionics, Safran S.A., and Collins Aerospace are developing innovative technologies to offer low power and lightweight AHRS systems to tap a major industry share.
Customize this Report
Inquiry Before Buying