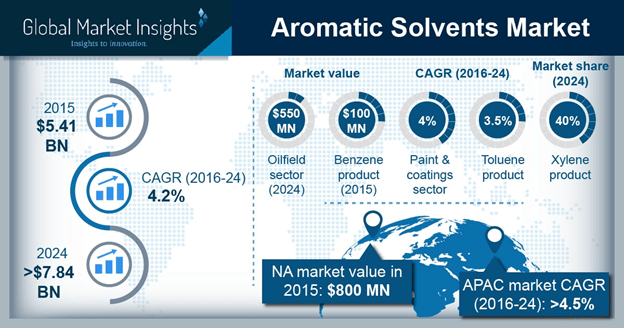 Aromatic solvents are a grade of solvents that mainly comprises of an aromatic hydrocarbon such as xylene, naptha or toluene, which makes them a suitable diluent and solvent in various end-use sectors. Aromatic solvents such as toluene generally find usage in varnishes, adhesives, paints, and as other chemical intermediates. Aromatic solvents offer high solvency rate and resist corrosion, which paves its usage in various end-use sectors such as paints & coatings, automobiles, textiles, adhesive & sealants, oil & gas, etc. Moreover, there ability to modify the viscosity as per the curing rate, improves the aesthetics and functionality of the outer layer painting in various paints & coatings applications. Enhanced chemical & physical properties of the specialty solvent and its extensive application in the paints & coatings segment is projected to swell the aromatic solvents market in the near-term. Furthermore, their usage as corrosion inhibitors in the oil and gas industry in addition to diluents and thinners in various end-use industries will further increase its demand in the coming years.

The demand for aromatic solvents in recent years has increased due to its growing usage in automotive industry, which generates huge demand for adhesives & sealants to bond the vehicle parts in order to provide mechanical stiffness to the vehicle, thus avoids failing. These solvents produced through crude petroleum distillation in the oil refining industry are broadly used as corrosion inhibitors in oil and gas pipelines to perform fractional distillation, which avoids deterioration of inner walls pipelines owing to high contents of carbon dioxide, hydrogen sulfide, and other corrosive products. These factors will swell the aromatic solvents market size during the forecast timeframe.

Solvents such as toluene has proved to be neurotoxic, which can cause neuropsychological changes such as irritability, anxiety, and forgetfulness when inhaled repeatedly. Aromatic compounds such as polycyclic aromatic hydrocarbons, offer intermediate biodegradability, which may restrain its growth in the near future. Nevertheless, rising trend for biodegradable chemicals among different end-use sectors will positively impact growing demand for specialty solvents.

The market on the basis of product is grouped into benzene, xylene, toluene and other solvents. The toluene based aromatic solvent is the leading segment in the market and is likely to continue its dominance over the forecast spell. Owing to its extensive usage in several industrial and commercial applications such as solvents in lacquers, paints, thinners, correction fluid, nail polish remover and glues. Beside this, it finds usage in leather tanning and printing processes.

Xylene an industrial-grade aromatic solvent which nearly generates 40% of product revenue in the segment and is likely to grow with a significant rate during the forecast period. Xylene is among the most reliable chemicals for various industrials applications such as heavy-duty industrial cleaning, thinning, paint removing, degreasing, concrete sealing applications and is often used for blending into gasoline and petroleum.

The aromatic solvents market based in end-use sector is categorized into pharmaceuticals, oilfield chemicals, automotive, paints & coatings, and other solvents. Paints & coatings is the leading segment in the market and is anticipated to continue its dominance over the forecast spell. Beside this, these solvents possess exceptional solvency rate, which increases its usage as thinners and diluents in various end-use sectors such as automotive, pharmaceuticals, and oilfield chemicals.

Pharmaceuticals sector nearly generate a revenue of more than USD 120 million in 2015. Xylene based aromatic solvents mainly find usage in the synthesis of various active pharmaceutical ingredients and cleaning of pharmaceutical equipment. Additionally, expanding use of these solvents across various pharmaceuticals process such as drug formulation is likely to drive the growth product market in the coming years.

Aromatic solvents market in North America account for over USD 800 million in 2015 owing to surge in oil & gas and pharmaceutical industry. Moreover, the newly elected government has generated a new wave of investment in renovation and development of commercial and residential infrastructure in the region, which is likely to boost paint and coatings demand in the sector. This in turn will further augment the market in the region.

The European market is mainly driven by the developed construction, electrical & electronics and automobile sector. Additionally, escalating application in the oil & gas industry coupled with the rising infrastructural development is the prime factor attributing to the product growth in the region. Besides this, augmenting demand from the pharmaceutical sector in the region will increase the use of aromatic solvents for various applications.

Aromatic solvents comprise of an aromatic hydrocarbon, benzene ring structure and other hydrocarbons compounds, which find wide application in paints, printing inks, coatings, and adhesives owing to its higher rate of solvency, that makes it a better solvent in various end-use sector. Additionally, its corrosion resistance properties also increase its demand in oil & gas sector. These solvents disperse or dissolve a range of elements to form exceptional binders, additives, pigments and extenders. Thus, increases its demand in the production of oilfield chemicals, paints & coatings, adhesives and sealants applications. In recent years, the market has witnessed substantial growth in the emerging countries, such as China and India, primarily due to increase in construction activities and the rise in demand for automobiles in the region.