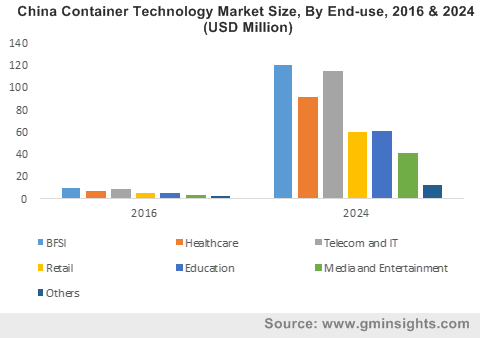 The APAC container technology market is expected to witness exponential growth during the analysis period due to rapidly advancing industrialization and sustained economic growth in countries such as India, China, and Singapore. With governments in the region promoting adoption of cloud computing through various initiatives and favorable legislations, the businesses operating in this region will increasingly adopt containers to effectively virtualize workloads over cloud networks. Moreover, emerging startups in the region are leveraging the scalability and cost-effectiveness of cloud platforms to focus on their core competencies and reduce the time-to-market.

With global leaders such as AWS and IBM undertaking strategic expansions in the region, the demand for container technology to manage and store huge data volumes is likely to increase significantly between 2017 and 2024.  Also, large enterprises are investing in datacenters and traditional hardware systems in developing countries such as India and China help in increasing the market revenue and capture the untapped market.

Docker is set to lead the APAC container technology market by 2024 while holding a significant market share of over 74%. This dominance can be attributed to high adoption of the technology as it enables easy virtualization of applications and is supported by major cloud platforms available in the region. Moreover, majority of the providers have collaborated with company Docker to offer their applications and services on their platform. Rkt framework is forecast to witness growth in the region due to the gaining growing of cloud technology and investment by players such as HP, Cisco, and IBM.

Container data management function is expected to hold the largest share of the market with more than 20% of the total revenue due to increasing volumes of data being migrated to cloud platforms. As public services and businesses operating in the region are producing large quantities of data consistently, the need to manage this data encapsulated in containers is expected to increase during the period. The container security function will register fastest growth between 2017 and 2024 as increasing adoption of container technology will lead to growing concerns related to security of mission critical data.

The reluctance of organizations to migrate to adopt cloud or hosted platforms as opposed to the conventional in-house IT infrastructure will spur on-premise deployment. Cloud deployment model on the other hand, is expected to exhibit fastest growth during the forecast period with a CAGR of over 40% owing to favorable government initiatives in many countries to promote adoption of cloud platforms for increasing operational efficiency.

The BFSI application market will hold the most significant share of the APAC container technology market by 2024 owing to numerous benefits offered by container technology to effectively run and manage high-resource workloads in a scalable and cost-effective manner. The IT & telecom sector is expected to register fastest growth during the period due to increase in number of mobile devices, significant upgrades of telecom and internet networks, and increasing number of IT start-ups in the region.

China container technology market is projected to dominate the industry by 2024 owing to the presence of significant Docker user community along with cloud service providers establishing datacenters in the country to comply with regulatory legislations. India, on the other hand, is expected to exhibit second fastest growth between 2017 and 2024 owing to recent government initiatives for digital transformation of the economy and the administration.

Singapore and Malaysia are becoming the hub for investment of datacenters, offering opportunity to the providers to provide new software applications and services. For instance, in 2015, Alibaba Cloud expanded its business by setting international headquarters in Singapore to accelerate its international expansion. Also, in 2017, Alibaba opened Malaysia’s first global public platform. The company strategically expanded into Malaysia to strengthen its position in the Southeast Asia market with the datacenter acting as a node for data traffic in the region.

The competitive environment in APAC container technology market is marked by the presence of emerging players focusing on developing container technology platforms along with major cloud service providers undertaking aggressive expansions to strengthen their position. These providers are strategically establishing new cloud centers to act as nodes for high volume data and to efficiently connect businesses in the region compared to other regions.

Some of the players holding majority of the market include Docker, Amazon, Mesosphere, Cloud Foundry, coreOS, and The LINUX foundation. In addition, pure players such as Sysdig, Twistlock, and ClusterHQ are focusing on offering customized products to increase their reach and brand portfolio. There has an been a major impact of software giants such as Cisco, HP, Microsoft, Red Hat, and IBM as they are hugely investing in market players and making a strategic move to enter container market.

Containers are lightweight and a package of software that includes everything required for coding, running, tools, libraries, and settings. Container technology has emerged as one of the alternatives for virtual machines which is cost-effective and has less complex architecture. Multiple containers run on same machine and share kernel, improving the efficiency of business processes compared to VM. This has led to the large adoption of containers for virtualization of huge volume of workloads. As countries in the region are focusing on transforming their traditional IT infrastructures into modernized ones, container technology is expected to play a key role in accelerating such transformation.