Antifreeze market size was valued at around USD 4.81 billion in 2020 and will exhibit a growth rate of over 7.4% CAGR from 2021 to 2027. Total market consumption will grow by 6.9% CAGR in terms of volume to reach 2,224.7 Kilo Tons by 2027. Rapid growth of the automotive industry, increasing purchasing power, and changing lifestyles are some of the major factors boosting the demand for antifreeze in emerging economies.

Antifreeze is used as an additive for the coolant in the internal combustion of liquid cooled engines that can adjust the freezing & boiling points. These additives are used to prevent the liquid coolant from freezing, which can lead to extensive engine damage. Antifreeze is used as an engine coolant, i.e., to increase the boiling point of water in the engine and to avoid the radiator from being overheated. In the aerospace industry, antifreeze is also used to remove moisture accumulated on aircraft wings, which can create additional weight and unnecessary drag during its take-off. 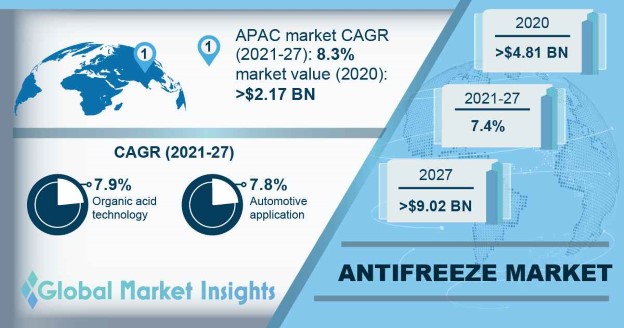 The growth of the automobile industry in emerging countries including Asia Pacific and Latin America is rapid due to the improving socio-economic factors and easy loan approvals, which have triggered growth of the automotive industry and is expected to witness similar gains in the coming years. Automobile has an extensive upstream & downstream linkage to diverse industries and sectors.

Rapid growth of automotive industry in China and India has enhanced the demand for automotive and automotive coolant, which will make significantly impact the antifreeze market share during the forecast timeframe. Additionally, improving consumer lifestyle and increasing number of international travelers in Asia Pacific has led to rising air traffic, triggering the demand for aircraft. These trends will have positive impacts on the coolants market size over the projected timespan.

Strong investments in R&D facilities of the aerospace & defense sector in North America and Europe coupled with rising air traffic will trigger aircraft demand, which will have a positive influence on the product demand, and thus have an increase in the overall antifreeze market in the coming years.

Antifreeze is used as an engine coolant, i.e., to increase the boiling point of water in the engine and to avoid the radiator from overheating. In the aerospace industry, antifreeze is also used to remove moisture accumulated on aircraft wings, which can create additional weight and unnecessary drag during its take-off. 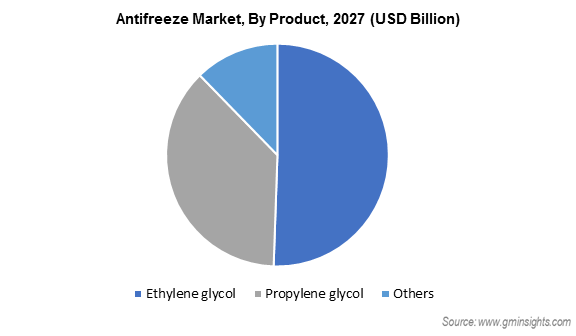 Propylene glycol is expected to grow at a CAGR of 7.5% through 2027. Propylene glycol is a relatively safe chemical used in industrial & consumer applications. Its mixture with water is termed as low-temperature transfer fluids. They are less toxic as compared to ethylene glycol and are therefore favored for many applications, mainly when human exposure can occur. 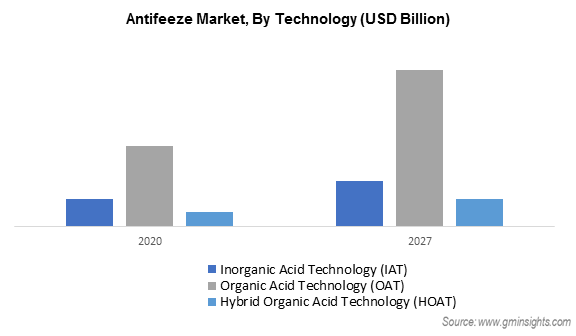 The OAT segment accounted for the highest share and generated a revenue of over USD 3.19 billion in 2020. OAT does not contain phosphate or silicates instead it contains sebacate, 2-ethylhexanoic, and other organic acids. They are nitrite-free, increasing their service cycle. Additionally, they have neutral inorganic salts and acids, which get degraded without affecting the environment. Due to stringent environmental regulations in North America and Europe, the use of IATs has lowered while the use of OATs has gone up in the past few years. The global demand for OAT will increase due to its environmental-friendly nature and longer replacement cycle.

The automotive application segment will account for over 65% of the total antifreeze market share in 2027. It is commonly utilized in the automotive industry to maintain optimum temperature inside the engine of vehicle by reducing excess temperature, which is produced when it runs and thus, avoiding severe damage to its internal component. The product possesses chemical inertness, excellent thermal capacity, low viscosity, non-toxic properties, and anti-corrosive, making it suitable for automotive applications. 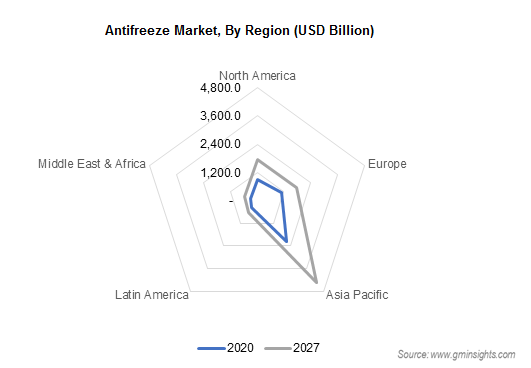 Market players are majorly focusing on making investments in R&D to expand their product portfolio and attain a competitive edge over its competitors globally. Furthermore, easy availability of raw materials used in antifreeze manufacturing increases the threat of new entrants. New product development, strategic alliances, and enhancement of the product landscape are the key initiatives in the global antifreeze market.

The antifreeze market report includes an in-depth coverage of the industry with estimates & forecast in terms of volume in kilo tons & revenue in USD billion from 2017 to 2027 for the following segments:

The antifreeze industry size was valued at around USD 4.81 billion in 2020 and is expected to hit a 7.4% CAGR through 2027.
The ethylene glycol product segment was responsible for an antifreeze market share of close to 51.8% in 2020 and will grow substantially with the higher usage in automobile engines.
The market revenue from the OAT technology segment reached more than USD 3.19 billion in 2020 and will grow with the increasing need for environmental-friendly characteristics and longer replacement cycles.
Automotive applications are expected to hold more than 65% of the total market share by 2027 owing to extensive product adoption to maintain the optimum temperature inside the vehicle engines.
The Asia Pacific market exceeded USD 2.17 billion in 2020 and will expand at a robust pace due to the proliferating automotive, aerospace, and industrial sectors in the region.
Customize this Report
Inquiry Before Buying